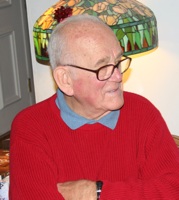 Eugene Dzikiewicz, my father, died on December 9. A slideshow of pictures of him, presented at his funeral, is at http://flickr.com/photos/jdzik/sets/72157603519495034. The following is a eulogy that I delivered at that funeral.

If you ever spent much time with my father, you almost certainly heard one of his stories. He loved telling humorous tales of things he had done and people he had known, which he would finish by saying, especially when speaking to his grandchildren, â€œAnd thatâ€™s the truth.â€

Which wasnâ€™t always accurate. Oh, Iâ€™m sure that most of his stories were based on real events, though I couldnâ€™t help but notice that the details tended to shift around over the years. But I donâ€™t really believe that he got that scar in his hand from grabbing a sabre-tooth tiger by the fang, and I donâ€™t entirely believe the story he loved to tell of the time his state-police cruiser went off a bridge, when he fought out of the car, holding his breath, and swimming up, reaching for the light, until he finished by saying, â€œAnd then I died.â€

My father graduated from high school in 1945. Like many young men of that era, he was soon drafted into the army, where he served his enlistment as a clerk processing the discharges of men who had served in World War II. While he never said it outright, I always suspected that he regretted missing out on what, to his young eyes, seemed the great adventure of his age. At least, some years later, when the war in Korea broke out, he volunteered for another enlistment, this time in the paratroopers, where he liked to say that the first dozen times he took off in a plane, he never landed in it.

My father still did not get his wish to go abroad. Instead, when his superiors noted his natural skills at organization and teaching (did you know that my father served for several years as an instructor at Northwestern Universityâ€™s Traffic Institute in spite of his lack of a college degree, having been expelled for pulling a prank on an officious dean?), they set him to work training new recruits. He still wanted to be sent to Korea, though, so, knowing that the usual penalty for going AWOL was to be shipped out immediately, he skipped off to home for 29 days, just short of the 30 that would result in an automatic court martial.

But it was to no avail. His commanding officer sighed, took away a stripe, and set him back to training recruits.

Soon after leaving the paratroopers, my father stumbled his way onto the Massachusetts State Police. Most of his best stories were about those days. From my fatherâ€™s telling, the State Police were like one big sitcom, full of eccentric characters like the old-school Sergeant Sinkievich, Sinky for short. It was Sinky who once sent a rookie out to lead the way over a flooded-out road to make sure there were no holes big enough to swallow a police cruiser. When the recruit worried that he might fall into a hole, Sinky said, â€œThat okay. I can replace you easier than replace cruiser.â€ It was also Sinky who testified in an early trial involving one of the first uses of radar to catch speeders. When asked by the defense attorney to explain how radar worked, Sinky said, â€œRadar work good.â€

But most of his state police stories involved my father playing some prank or other. One day, he was on patrol with Joe Desolets, who often showed up in my fatherâ€™s stories as a combination sidekick and straight man. It was a snowy day, and the cruiser got stuck in the ice. My father got out and walked to the front wheel while Joe looked on. â€œHey Joe, I heard that if youâ€™re stuck in the ice, it helps to let some air out of the tires.â€

â€œRight.â€ My father drew his revolver, took careful aim, and fired into the ground next to the tire. The last time he told me that story, just last week, he was still laughing at the look on Joeâ€™s face.

Once he was returning from some late-night function with Joe when they saw a truck barreling down the highway at around 20 MPH over the speed limit. They hit the sirens and pulled over the truck. The truck driver, a little guy, climbs out of the cab and says, â€œOy, have you got me!â€ And because he made my father laugh, my father let him off with a warning.

Another time when my father stopped someone for speeding, the guy had what he thought was a foolproof method to talk his way out of a ticket. He had read the local police blotter, picked out an unlikely looking police officerâ€™s name, and was ready with his story. â€œBut officer, Iâ€™m a close personal friend of Corporal Eugene Dzikiewicz. Maybe you could let me off this time.â€

â€œWell I canâ€™t stand that guy. That sonofabitch took my girl out the other night.â€

â€œAnd make sure you read the name of the arresting officer on the ticket.â€

Some of his best stories came from his years at the Police Academy. We have somewhere the memoir of a former Massachusetts State Trooper, and in his academy days the role of stereotypical ass-kicking drill sergeant is filled by my father, something that I always found far-fetched, as my father was anything by a strict disciplinarian when I was growing up.

One time at the academy they had an athletic competition between squads of trainees, with the winning squad getting a weekendâ€™s leave as prize. After the winners packed up and left, my father was left with the sad losers.

Saturday morning, he took the troops out on their morning run. While running down the nearby highway, my father noticed that the door was open at one of the nearby restaurants. â€œLeft face,â€ he called. â€œLine up.â€ And he directed them into the restaurant.

The place was empty, so he ordered them to sit at the bar. In a back room, my father found the assistant manager, cleaning up after the night before. â€œIâ€™ve got a few men out here who would like a drink,â€ he said.

The assistant manager came out to the front, took a look at the line of sweaty recruits sitting at his bar, and sputtered: â€œWhat are you doing here? Weâ€™re closed! Go away!â€

â€œAll right, men,â€ my father called. â€œForm up.â€ And he had them run off, much cheered from the morning prank.

Iâ€™ll finish this with two stories of my own. When I was about ten or eleven, my father was working for the federal government, giving grants to state police forces throughout the New England states. One time, he had to travel through northern New England for a number of meetings with various police officials and assistant attorneys general. And so naturally, like any government worker off to meetings with important people, he brought his ten year-old son. I learned to love garlic bread at one particular dinner with Vermont officials on that trip.

At one point, we were driving on the New Hampshire turnpike. As we came up to a tollbooth, my father said, â€œWatch this. Iâ€™m going to go right through without paying toll.â€ Ever so smoothly, he slowed the car as we neared the booth. He suavely pointed to the toll taker and gave a knowing nod. The attendant gave him a little wave, raised the gate, and we drove on through.

I was astounded. â€œYou did it,â€ I shouted. I couldnâ€™t believe he had gotten away with it.

About ten years later, I was telling the story at a family dinner. And my mother, who often had the job of bringing a little truth to the proceedings, pointed out that we had been driving in a government car, borrowed from the federal motor pool. And in New Hampshire, government cars were allowed to drive on the turnpike toll-free.

I suppose I could have gotten mad at my father. But I thought it was a marvelous prank â€“ after all, you never let go a chance to pull a prank like that, thatâ€™s one of the things I learned from him. And I had learned from that and a few other experiences with him that with enough chutzpah, you could get away with murder. Thatâ€™s a lesson I often used during my teenage years.

A few years later, when I had children of my own, I realized another lesson from that trip. Sometimes itâ€™s a fatherâ€™s job to make the world a more magical place, and next to that, what difference does a little truth make?

My last story: this last summer was my fatherâ€™s eightieth birthday. We had a party for him, just the family. And my mother had the idea that the thing he would most enjoy would be to give him a funeral when he could still enjoy it. So Sara, my sister, read a humorous poem that she wrote about him, and I gave a first draft of this speech. He absolutely loved it, loved being the center of attention, loved hearing his own stories told back to him.

Later that day, I stood with him outside by the pool. And he said to me, â€œYou know, eighty years is pretty good. Eighty years is just about enough.â€

A month or so later, after he was diagnosed, I reminded him of that, joking, â€œWhen you said eighty years was enough, I didnâ€™t know you were serious.â€ Which also made him laugh, and which he repeated to others later. Because that, of course, was how he dealt with hard times â€“ with a joke and a laugh.

But all I can say is, Dad, eighty years may have been enough for you. But it was not enough for us.

This entry was posted in family, obituary. Bookmark the permalink.

One Response to Eugene Dzikiewicz, RIP