Here’s the run-down of things that we did in Massachusetts:

Sunday, August 9: We picked up Andy at the train station in Alexandria at 9:30 and spent the next twelve hours or so driving north.Â  A long day, but at least we got to eat lots of yummy rest-stop food.

Monday: We spent the morning wandering around Gloucester, had lovely lobsters for lunch, and went to Salem for cheesy tourist stops.Â  See the last post for more details on that.

Tuesday: Hampton Beach was the destination beach of my childhood.Â  We went there often – that’s where I learned the joys of body surfing in the large cold waves.Â  Tuesday was my return to Hampton.Â  The waves were a lot lower than I remember – either it was a calm day, or my images are calibrated to a much shorter me.Â  And the water was awfully cold for those of us more accustomed to the Chesapeake – Diana dipped in one foot and decided it was not for her, and while Kate spent some time in the water with me, her skin was turning as blue as her bathing suit.

But the boardwalk was a lot of fun – Julie enjoyed searching every candy shop for the ultimate fudge (and ended up buying a pound in each of two shops: yummy!), Andy circumnavigated the boardwalk several times, and I just enjoyed looking at the various kitschy things with a bemused look.Â  A lovely day!

Wednesday: In the morning, the girls and I went with my mother on a whale watch.Â  We spent four hours out on a boat and ended up seeing four humpback whales, thus averaging a whale per hour.Â  Here’s some pictures: 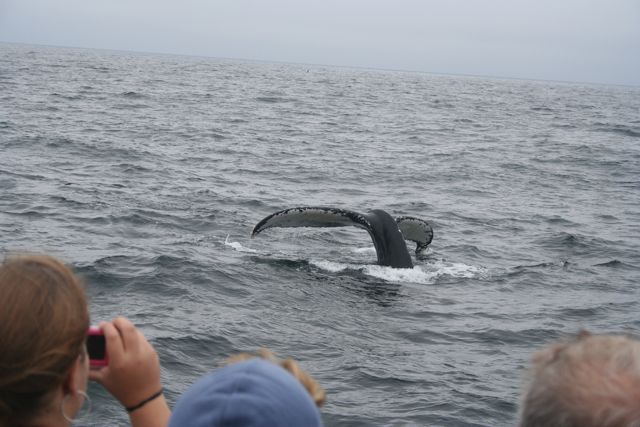 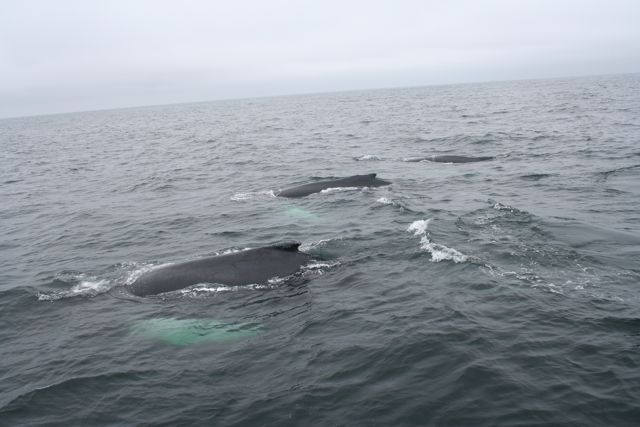 Later in the day we went to my Aunt Joan’s house.Â  She held a big party where I got to see aunts, uncles, cousins, and their various families.Â  This turned out to be one of my favorite parts of the trip – it was great to spend time talking with everyone.

Here’s me with my adoring cousins, a lovely group of ladies with impeccable taste: 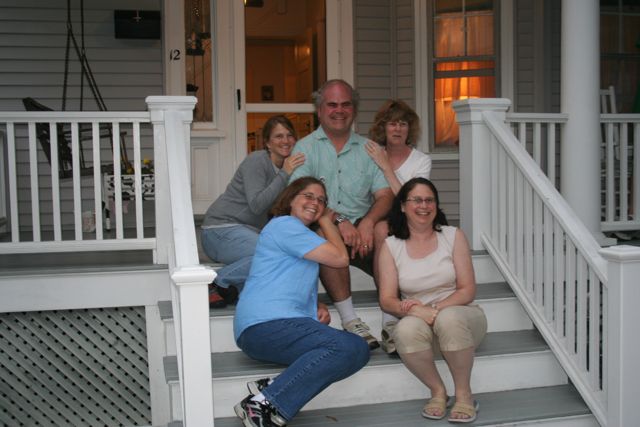 Thursday: The kids were ready for a lazy day, so Julie and I went on a Revolutionary War binge.Â  We climbed the Bunker Hill Monument (275 stairs up, the same number down again – and our calves complained for the next two days), toured the USS Constitution (it’s still a part of the navy, so the tour guides are all navy personnel: it added a lot to hear them talk about what “we” did in battle on the ship – as active duty navy, they feel a part of the Constitution’s heritage), and Lexington and Concord (both remarkably small given the importance of what happened there – Lexington in particular looked postage-stamp sized after all the Civil War battlefields we’ve visited, but then only around 300 men fought there).

Friday: Andy and I went scuba diving off Rockport in the morning (lots of lobsters, several flounder, and a nice sized skate).Â  Then Julie, the girls, and I went into Boston to visit the Aquarium (a really nice one – very similar to Baltimore’s, which should come as no surprise as it was one of the major influences on the design of Baltimore’s aquarium) and the Museum of Fine Art (remarkable museum, with art from just about every period and place that you can imagine – we saw ancient Roman and Egyptian art, a special exhibit of work from Renaissance Venice, and Japanese art of several periods, including a fascinating exhibit of pieces from 1930’s Japan).

Saturday: A somewhat lazy day, we went to the Gloucester craft fair, then back to the Salem Willows where they were holding a jazz festival.Â  Finally it was dinner at Bertini’s (one of my mother’s Salem hangouts in her college days) with Joan and Chuck and two of their grandchildren.

And that was my week in Massachusetts.Â  Pretty busy, no?

One Response to Massachusetts wrap-up