On the Lexington battlefield, there was a monument erected in 1799.Â  It included a plaque that had to be the most melodramatic historical marker I’ve ever read, including no less than eight exclamation points.Â  As an apt finish to the Massachusetts trip, I here include the text in its entirety:

Sacred to Liberty & the Rights of mankind!!!
The Freedom & Independence of America,
Sealed & defended with the blood of her sons.

This Monument is erected
By the inhabitants of Lexington,
Under the patronage & at the expense of
The Commonwealth of Massachusetts,
To the memory of their Fellow Citizens,
Ensign Robert Monroe, Mess. Jonas Parker,
Samuel Hadley, Jonathan Harrington Junr,
Isaac Murry, Caleb Harrington, and John Brown
Of Lexington & Asahel Porter of Woburn,
Who fell on this field, the first Victims to the
Sword of British Tyranny & Oppression,
On the morning of the ever memorable
Nineteenth of April, An. Dom. 1775.
The Die was cast!!!
The Blood of these Martyrs,
In the cause of God & their Country,
Was the Cement of the Union of these States, then
Colonies: & gave the spring to the spirit, Firmness
And resolution of their Fellow Citizens.
They rose as one man, to revenge their brethren’s
Blood and at the point of the sword to assert &
Defend their native Rights.
They nobly dar’d to be free!!
They contest was long, bloody, & affecting.
Righteous Heaven approved the solemn appeal:
Victory crowned their arms: and
The Peace, Liberty, & Independence of the United
States of America was their glorious Reward. 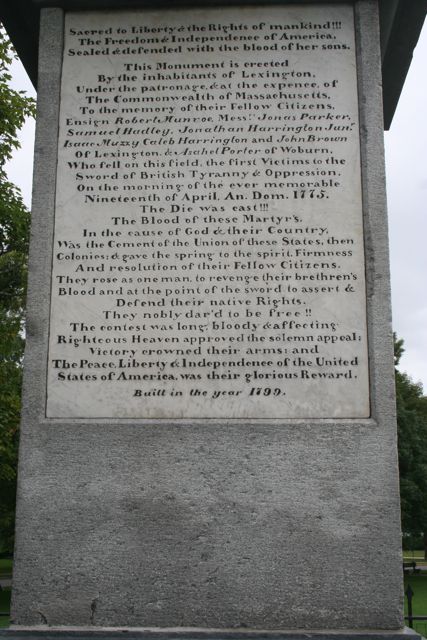