I’m woefully behind on these posts. Â That’s in part due to connectivity failures – internet isn’t great here. Â Which is probably just as well – it forces me to spend more time resting, reading, and doing fun stuff – lack of connectivity can be a real blessing!

Another piece of bookkeeping: one of my fellow travelers has expressed a dislike for being mentioned in this blog. Â I shall still recount tales of this person as they intersect with mine, but will no longer use the person’s name. Â If you know the Dzikiewicz’s, it should rapidly become clear who it is.

And yet one more: thanks to Steph, whose travels in Latin America are much more extensive than my own, for the correction on the status of Puerto Rico. Â Puerto Rico is apparently a commonwealth, complete with congressional representation, and not a territory.

Now, to catch up a little. Â Monday was a fairly busy day, including several water activities aided by the fine folk at Aquatica (a local surf and dive shop). Â Monday morning featured scuba diving with Andy. Â Shore diving, which means that you carry your gear to the beach, wander into the water, and swim off. Â We drove first to one dive site, then to a second that turned out to be about a hundred yards from our resort.

My impressions of the scuba were about the same as my impressions of the snorkeling: some nice fish life, though not as good as other places I’ve been. Â (Highlights were a pair of spotted eagle rays swimming in formation and a couple of mid-sized turtles.) Â But the coral formations are spectacular. Â In fact, the second dive was pretty much all a bunch of coral tunnels that we swam through: we’d come through one tunnel, get to open water, then turn around and head through another, sometimes with the current behind us (which was marvelous), sometimes having to kick into the current (not as much fun). Â Here’s a picture of Andy in one of those tunnels: 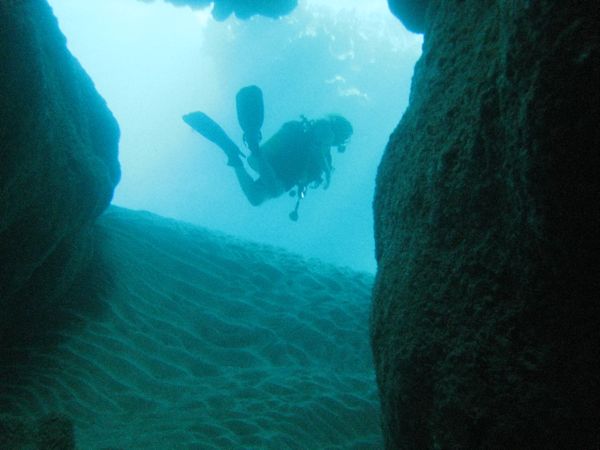 Then in the afternoon, I took a surfing lesson with Kate and Unidentified Humanoid. Â Surfing turns out to be pretty darned vigorous, requiring agility and balance, two words that don’t describe me. Â So I stayed out on the waves for a while, then sat on the beach with Julie and cheered on the girls (who took to it rather well). Â Here’s some pictures from the day: 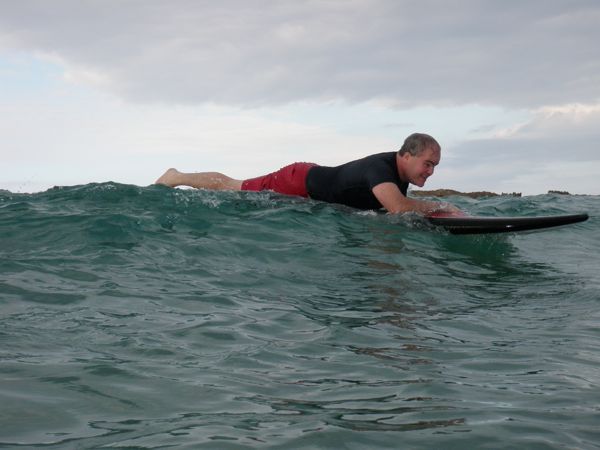 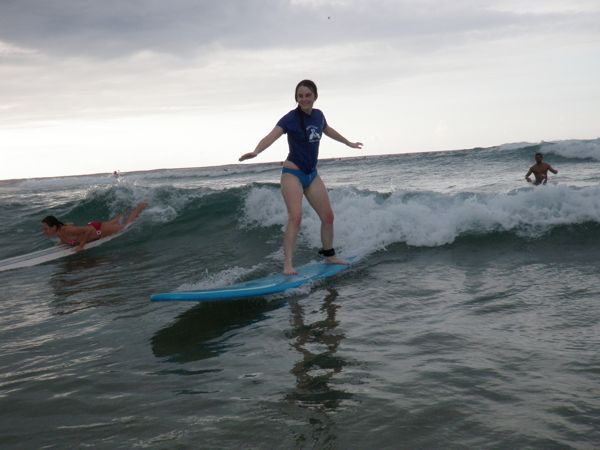 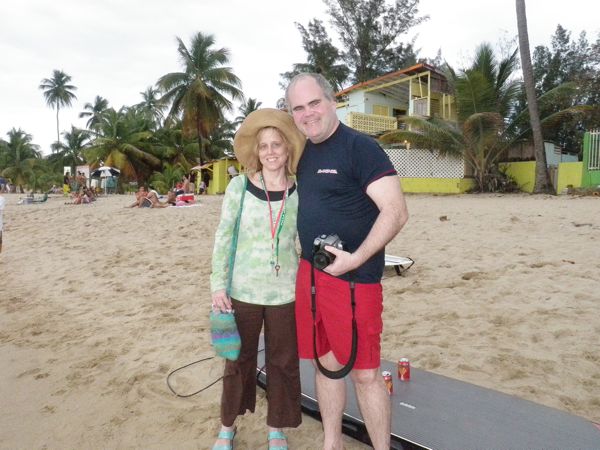 After that, we grabbed dinner, then I went for a night-time snorkel. Â Nothing amazing in the waters, though I did see a spotted eel that was around four feet long, just slithering across the coral. Â And the spiny sea urchins are a scary site illuminated only by flashlight: they come out from their nooks and crannies and sit on top of the coral, looking about ten times larger than they do by day – like a black softball with foot long spikes emerging from it.

Anyway, I may try to catch up with the last couple of days today. Â It’s rainy here now, so I may have a chance to blog more. Â Or I may not – I’ve found a good beach book (“Carter Beats the Devil” – details when I get around to writing it up in a “What I’ve been Reading” post), and the taste of lotus leaves is starting to grow on me…