After four years, I’m back in Bangalore, once more a tool for global outsourcing. Â (When I leave Mixx, a team of UberMedia developers out here will be taking over my code. Â I’m here preparing them for that moment. Â And a special bonus: I’ll get a chance to meet Raghu Somaraju, ace Mixx developer and our only offsite developer. Â Although I’ve worked closely with Raghu for four years, this will be my first chance to meet him face-to-face.)

A few things to note. Â First, while India is much different than the US, it’s hard to find a place to be strange and exotic when you’re visiting for the sixth time. Â Bangalore has changed a little since last I was here (they’ve got a nice new airport, and they’re working on a light rail system – about time they started beefing up the local infrastructure!), but it’s pretty much the same place.

Second, I flew Qatar Air this time, instead of United (which was AOL’s airline of choice). Â An excellent experience – I rather like Qatar Air and would gladly use them in the future. Â (They layover in Doha, Qatar, was my first time on the soil of a dictatorship, for those keeping track. Â I seem to have survived the experience. Â So did the dictator.)

Third, I gave myself an extra day here in Bangalore, arriving a day in advance of when I’m expected in the office. Â While I made the most of my day, it wasn’t just a junket. Â One thing I’ve learned in my trips to Bangalore is that jet lag sets in strongly in the afternoon of my first day here. Â I’d be useless in the office once lunch is over (not surprising, given that I got a total of eight hours of sleep over the past two nights, and four of those were in a plane, and the clock is pretty much turned upside down here – India is 9 1/2 hours ahead of the US at this time of year (they don’t do daylight savings)).

So I spent the day visiting Bangalore.

In my previous trips here, I spent any down days I had visiting sites a few hours from here. Â As a result, I never did visit the Bangalore sites. Â Today I made up that lack. Â Though as it happens, Bangalore is a bit short on tourist sites. Â But there were a few: 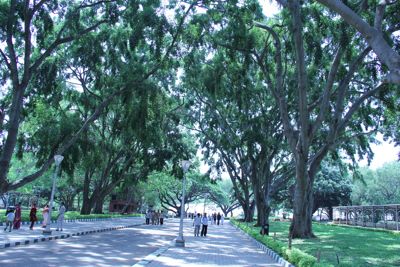 – The Bull Temple, a temple featuring a large statue of Nandi, the pet bull of Shiva. Â Here’s me with the bull: 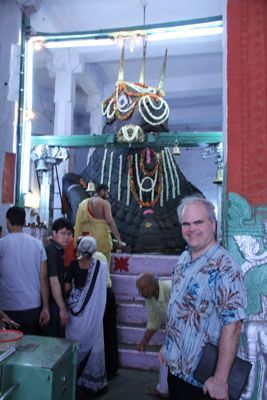 (Note: this is the second holy statue of Nandi I’ve seen in India. Â He’s obviously a popular subject.)

– Tipu Sultan’s Bangalore summer palace. Â Tipu Sultan fought against the British in the late 18th century, about the same time we were fighting the Revolution (and, in some cases, against some of the same generals that we fought). Â I’ve visited others of his sites before. Â This was nice enough, but the places near Mysore are nicer.

– Bangalore Palace. Â Built in the 1870’s by the British, this is a nice looking castle currently owned by the local maharajah (India still has some, though their powers are limited). Â Here it is: 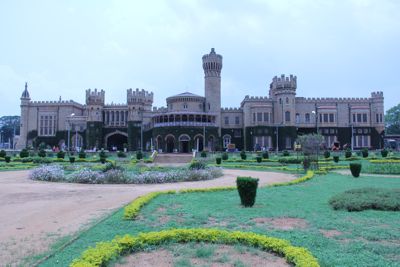 I enjoyed it, but I should note that the Maharani seemed to like furniture made from animal parts, like these rather odd footstools: 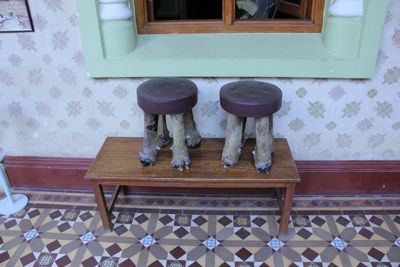 The maharajah, on the other hand, really enjoys having art that prominently features naked women, ranging from classic nudes gathered together on a wall: 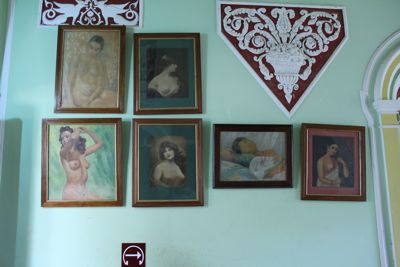 to this rather strange and suggestive Frank Franzetta-style item: 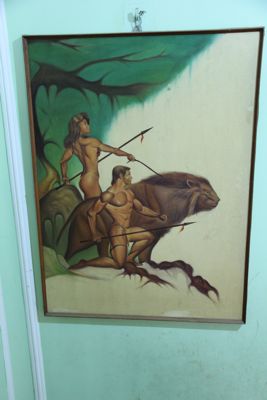 Now don’t get me wrong: I like female nudes as much as the next guy. Â But geez, dude, how about a little variety? Â I mean, you might want to have at least one landscape!