I’ve been to London twice before.

The first was the summer of 2001. Â I was on a business trip to Dublin and arranged a lengthy layover in London. Â The eight hours I was there allowed me to see the Tower of London, St Paul’s, ride the London Eye, visit the Churchill War Bunker, walk through St James and Hyde Parks, passing by Buckingham Palace, and almost get beaten up by a punk for taking his picture. Â A busy day!

The second time was fall of 2003. Â Julie and I spent four days in London and another four driving through southern England. Â We visited a great deal more of the sites and had lots of fun.

This time, we’ve taken the kids. Â Yesterday was our first day here. Â Not surprisingly after a redeye, Julie and the kids were fairly jetlagged, so once we had lunch they all collapsed in the rooms for several hours. Â But not me! Â I was off, walking past Buckingham Palace (there were tons of tourists), wandering through St James Park (there was a brass band playing Gershwin that I tarried to hear), visiting the Guards Museum (nice uniforms and stuff, not terribly noteworthy), passing through Trafalgar Square, wandering through Whitehall down to the Thames where I saw Cleopatra’s Needle (an Egyptian obeslisk: Julie and I visited it’s twin in Central Park a couple weeks ago), and passing by Big Ben and Westminster Abbey. Â Here’s Cleopatra’s Needle: 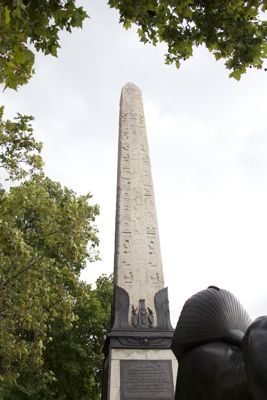 I got back to the hotel around 4:30. Â Julie and Kate were up for some wandering, so we set off back to Westminster Abbey and Big Ben. 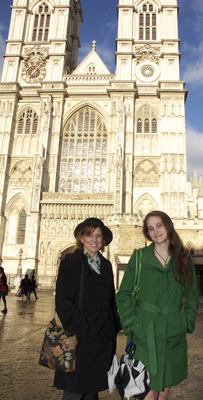 Then dinner with all. Â Andy was still tired – he hadn’t slept on the plane at all. Â So Julie, Kate, Diana, and I went out and saw Westminster Abbey, Big Ben, a most delightful and cheesy haunted house, and rode the London Eye. Â Here’s some pictures. 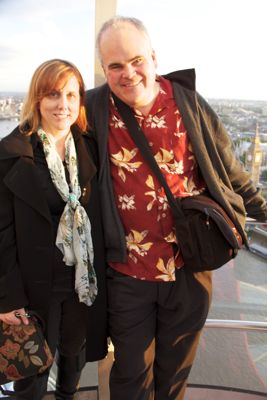 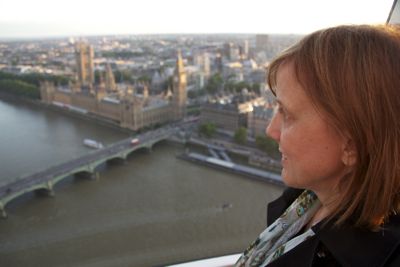 It was an odd weather day. Â When I had been out on my solo walk, it alternated between partial-cloudy and light rain. Â When I got back to the hotel, Julie wouldn’t trust my weather report. Â Looking out and seeing clear skies, she said she’d risk going out with no raincoat or umbrella. Â Cue the rainstorm! Â But by the time we went for our post-dinner wander, the sun had come out and the skies were blue. Â There remained just enough clouds for rainbow fragments and strange coloration. 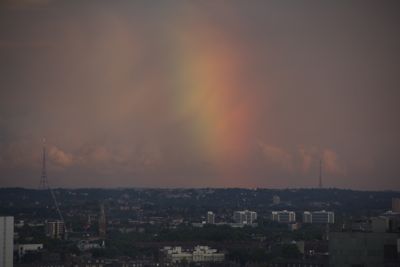 But all in all, a great start to what should be a great trip.

One Response to London!