Letting someone else do the planning

Today we went on the first of our day-long guided bus tours for sites near London. Â First stop, Stonehenge! 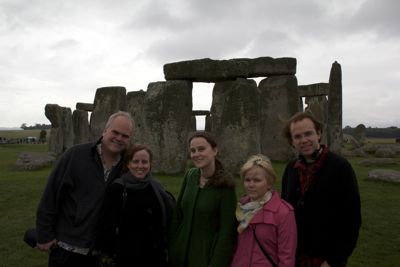 It was a dramatic cloudy day, just the thing to imagine all those ancient Britons dragging rocks across the field for whatever reason they dragged all those rocks. Â We had a grand time.

And here’s a Kate-and-Diana henge, visible through the stones: 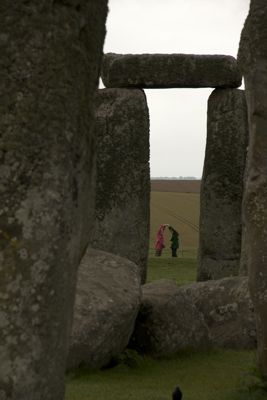 Then it was a matter of who could do the best impression of the frowning stone. Â You tell me – who wins? 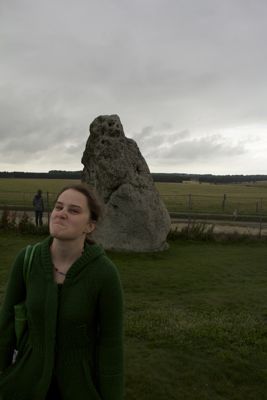 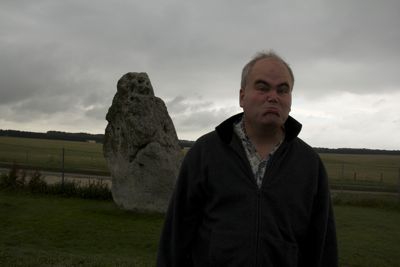 Then it was off to Salisbury, a town near Stonehenge, where they have a terrific gothic cathedral and plenty of Elizabethan architecture. Â In fact, Kate looked at buildings like this one and said that she always thought that kind of thing was just a spoof in amusement parks. Â She found the real thing to be quite disorienting! 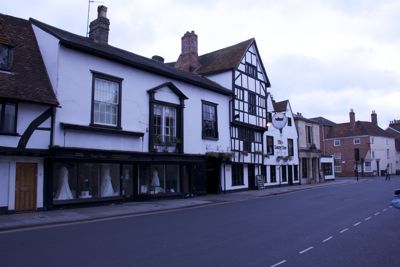 I particularly like the way that the British include a little modern art with their ancient buildings. Â They had several plastic statues of modern folk around the cathedral. Â Here’s one of my favorites: 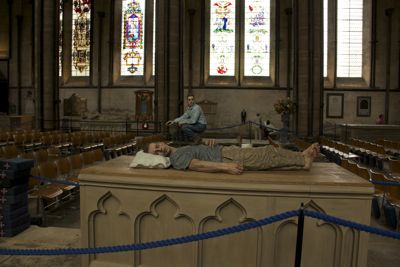 And here’s the modern baptismal font, complete with reflection of the cathedral ceiling. 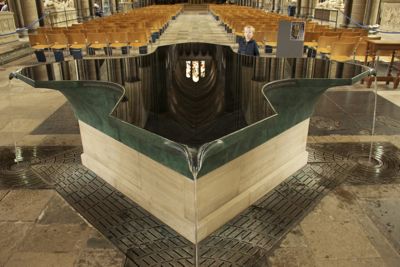 Interesting factoid: William Golding, author of Lord of the Flies, was a teacher at a boy’s school in Salisbury. Â Yes, that’s right. Â Lord of the Flies was inspired by its author’s time spent teaching young boys.

Then it was off to Bath, including the Roman baths there. Â Where, interestingly, we ran into our guide from the Jack the Ripper tour last night. Â (Good thing too – he owed me a piece of candy for knowing who the current Duke of York is, which he paid off today.)

Here’s the baths, with Kate in the foreground: 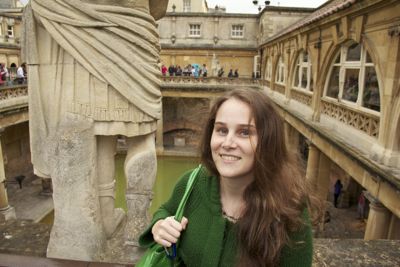 But my favorite thing that happened in Bath was when we hit the gift shop. Â There was a copy of a guide of the Bath Fashion Museum. Â Fashion museum, said Diana? Â We still had forty minutes before the bus had to leave, and it was only a ten minute walk to the museum, so Diana and I put on our rocket boots and sped our way through the lovely Georgian streets of Bath. Â We did a mad tour of an exhibit on movie costumes, including the following from Young Victoria: 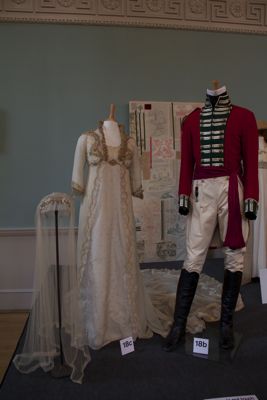 Then, confident that we had twenty minutes left, allowing for a leisurely wander back down the hill and a visit to the Bath Abbey (where Julie, Andy, and Kate went instead of the Fashion Museum), we turned a corner and found – there was another whole floor of period clothes!

Yes, we did that floor. Â Yes, we picked up a book for Diana in the gift shop. Â Yes, on the way back we did a quick pass through the abbey. Â And yes, we made the bus on time!

I do love adrenaline siteseeing!