Much Ado about Doctor Who

Getting everyone up and out in the morning can be quite a challenge. Â So much so that I’ve gotten in the habit of taking short journeys in the mornings until everyone is ready to go. Â (By this you should note: Dad still has the most stamina for tourism, something I was wondering about now that the kids are all in their twenties and the years are growing on my own roster. Â Go Dad!) Â This morning, Andy and I walked to the Imperial War Museum, a rather excellent museum containing tanks, planes, really big guns, and various exhibits about Britain’s wars from WWI to the present. Â Here’s Andy with Montgomery’s tank from WWII: 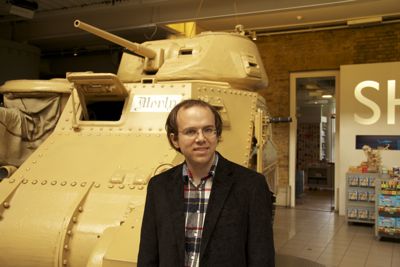 Then it was off to lunch, and then one of the great tourist sites in the world: the Tower of London.

One of the things that makes the Tower of London such a great tourist destination is that it has some of the best tour guides in the world. Â The Beefeaters, or Yeoman Royal Guard, are all retired sergeants from the British army. Â (Well, some are former marines, navy men, or airforce. Â But traditionally they were army.) Â They do a terrific job giving tours that focus on the gorier parts of the Tower’s history, with detailed descriptions of the more gruesome beheadings that took place. Â Here’s the one that gave us a tour today: 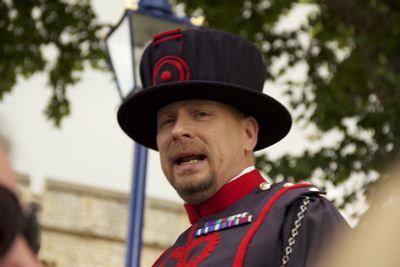 Now there’s one thing you should know about this guy. Â He was showed up in a most embarrassing manner by a certain American tourist. Â See, the guide mentioned that Henry II was Edward I’s grandfather. Â Silly him, everyone knows that Henry II was Edward I’s great-grandfather. Â Which a certain uppity colonial told him (while in a break between stops – that colonial isn’t completely uppity!). Â The guide had his doubts, but a quick perusal of Google shows that the colonial was right in this case. Â Hooray for America – we know more about British history than the Brits. Â (Well, some of us do, anyway. Â Some of the more obnoxious of us who love nothing better than to correct a tour guide!)

Then it was off to St Paul’s Cathedral. Â This is my second-favorite building in the world (the first is the Taj Mahal). Â I loved the trip – a quick dash up the spiral staircase to the dome, a quick descent down to the vault under the cathedral. Â Alas, no pictures – they wouldn’t let us take any. Â But we paid our respects to Lord Nelson and the Duke of Wellington, both of whom are interred here, and I basked in that lovely white marble dome.

We went back to the hotel for a short break, then it was off to the first of the plays for which we have tickets this week. Â “Much Ado about Nothing,” featuring David Tennant and Catherine Tate as the leads. Â If you are of a certain geeky disposition, you’ll know that these were the leads in the British science fiction series “Doctor Who” a couple years back. Â We Dzikiewicz’s are of such a disposition – the girls in particular have a crush on Tennant – so this was a real treat. Â It didn’t hurt that the production was absolutely marvelous. 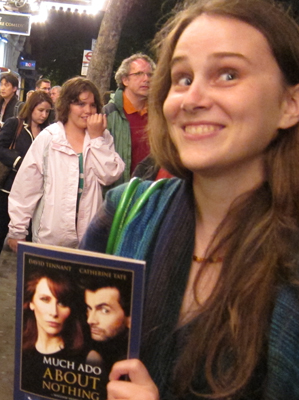 Note: you won’t see many pictures of Diana in this blog. Â She’s here and having a good time – I assure you! Â (She’s smiling next to Kate in the pre-cropped version of this picture.) Â But she doesn’t like having pictures of her posted online, so the couple of times she’s appeared here, it was with her express permission, for which I am grateful.

2 Responses to Much Ado about Doctor Who