The crowds of London

It’s getting late, and we have an early morning tomorrow. Â So just a quick recap.

First I went off on my own on an early morning jaunt to the Churchill War Bunker. Â This is the underground shelter that housed Churchill’s government during WWII. Â I had visited there back in 2001 but had read that they added a new Churchill museum. Â It did not disappoint. Â Nice stuff for the history geek.

On the way, I spent a little time sitting in the beautiful St James Park, a place where every view is perfectly choreographed and where even the waterfowl are scenic. Â Here’s one of their pelicans. 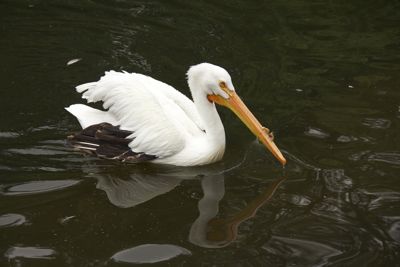 Then we all met up at Buckingham Palace to see the changing of the guard. Â It’s an interesting ceremony, but it’s probably the worst example of crowding that we encountered in London. Â This is definitely tourist season – there are vast crowds of people in the various places we’ve been, and this was an example. 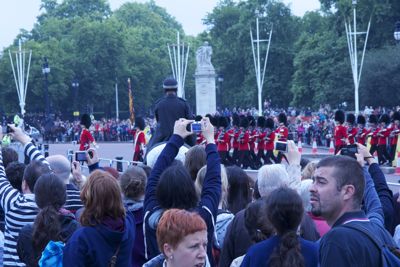 Then it was off to Westminster Abbey via St James Park. Â Here’s Andy and Kate against one of those choreographed views. 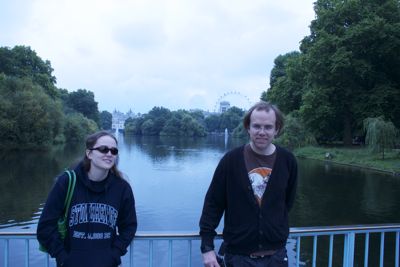 I love Westminster Abbey, a place where vast numbers of really famous people are buried. Â There are not only all those Shakespearian monarchs (Elizabeth I, Mary, Mary Queen of Scots, Henry V, Henry IV, Edward the Confessor, Edward I, Edward III, Richard II – okay, not all of those are in Shakespeare plays), but there’s also Darwin and Newton. Â No photos allowed, though, so no photos here.

Then Diana took a break from crowds while Julie, Andy, Kate, and I visited the British Museum. Â Here’s a couple of pictures from there. 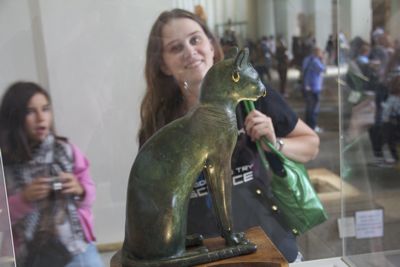 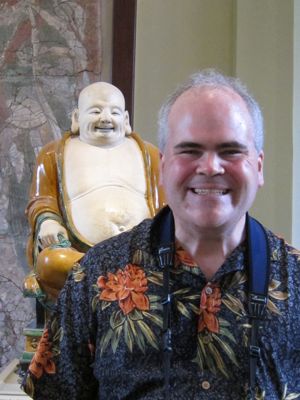 Then it was dinner, and we all went to see “Doctor Faustus” at the Globe Theater, a reproduction of Shakespeare’s Globe. Â Here’s the kids in our box. Â Well, sort of, anyway. 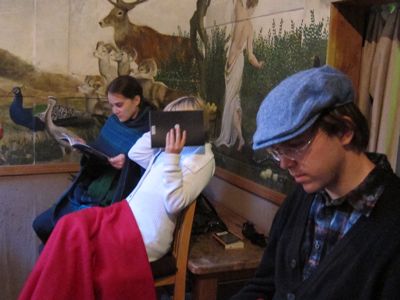 And one last note: I love London cabs. Â We never have trouble getting a cab. Â It’s cheaper for five of us to ride a cab than the Underground. Â And unlike American cabs, you can fit a family of five in one taxi without any problems. Â Of course, two of those five have to sit backwards, and given that Diana and Julie get motion sickness when riding backwards, I’m pretty much always one of the two. Â So here’s a standard view of one of our cab rides. 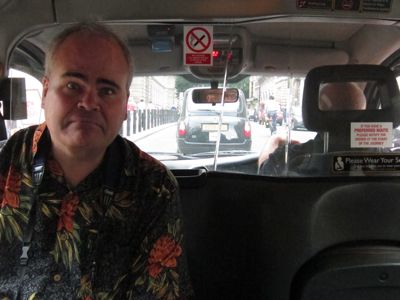