The end is in sight!

Our last full day in London. Â That’s probably just as well, because I’m getting tired. Â I plan to sleep for about a week when I get home.

For our last day, we had a fun day with little siteseeing. Â Instead, we hit the markets. Â First was Camden Market, which was hugely fun. Â Everyone had a good time – even me, though the only things I bought were orange juice and a short and much-needed massage. Â I didn’t realize how much my neck hurt from carrying around the camera until the masseuse was digging his fingers into it.

Here’s Kate at the Stables Market in Camden Market: 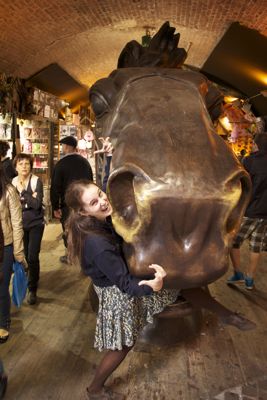 Then it was to Portobello Market, which was a lot less fun, consisting mainly of stalls of antiques and food surrounded by huge mobs of people. 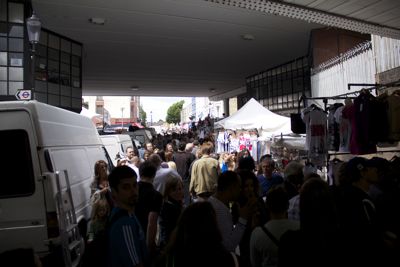 We then returned to the hotel to drop stuff off and take a short break, then it was off for a walk through the Green, Hyde Park, and Kensington Gardens. Â Quite pleasant. Â Diana took the opportunity to climb a tree – here she is. 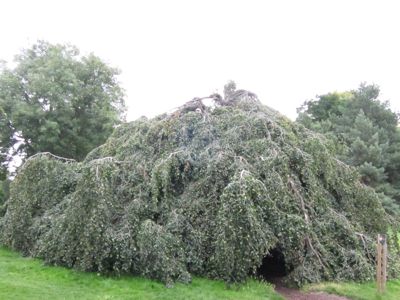 Can’t see her there? Â Try this closer shot: 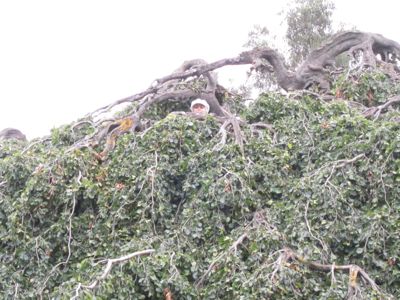 Finally, it was dinner, and then we went to see “Love Never Dies,” the sequel to “Phantom of the Opera.”

Two things you should know. Â First, I love musicals. Â Second, I hate “Phantom of the Opera.” Â The plot is at best semi-coherent and drops many of the things that I used to love about the old Phantom movies (no acid in the face!). Â And then there’s the Phantom. Â In the scene early on when he lures Christine to his underground lair, and she swoons on his bed in her diaphanous nightgown, all he does is sing to her. Â Poor Christine!

But everyone was in the mood for this show, so I agreed Â to go. Â And to my great surprise, I kind of liked it. Â Much more than the original Phantom, anyway. Â To be sure, it’s an incredible cheese-fest, complete with oversinging and melodrama around every corner. Â And then, it’s set in a freak show on Coney Island (Julie and I saw one of those just three weeks ago, and had a great time too!). Â But those elements were kind of fun, in a so-bad-it’s-good kind of way. Â In fact, my one complaint about the show is that it dragged a bit in the second act when it started getting too serious – it really needed more mustache-twirling and oversung melodrama. Â But overall, kind of fun. Â (But if you want to see it, better go soon – it’s closing here in August, and given that it wasn’t a London success, I don’t expect to see it in New York any time soon.)

Of course, I couldn’t take pictures in the show. Â So to represent the freakish nature of the Phantom, I give you this picture of Kate’s rather freakishly limber arms. 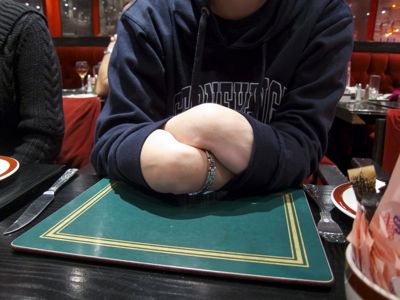 And so ends our touring. Â I’ll do a wrap-up post tomorrow or Monday (tomorrow is going to be a busy one, what with traveling and all), so stay tuned!