I’m a bit behind on blogging. Â More to the point, Julie and I had a nice big trip that I still haven’t described. Â Let me toss out the quick details.

The primary motivation of the trip was a somber one. Â We drove up to my mother’s home town of Salem, Massachusetts, to meet up with my sister Sara to scatter the ashes of my parents. Â For this, we chose the pier at the Salem Willows, one of my mother’s favorite places. Â The Willows is an old fashioned amusement park which now has a couple of rides, two arcades, and some restaurants. Â It’s seen better days, but it’s still a fun place to visit.

The Willows also has a small beach and a pier the reaches out into Salem Harbor. Â On a rainy Thursday, we took the ashes of my parents to the end of the pier and scattered them on the waters. Â We poured out a can of Budweiser (my father’s favorite beverage) and a box of General Tso’s chicken (a favorite food of my mother). Â We then stood for a while on the pier and watched the current take my parents last remains out to sea. Â A sad moment, but it suited my parents’ memory.

While in Salem, we took Sara’s daughter Marjorie to the YMCA playroom (which was excellent: if you ever find yourself in Salem with a 3-year-old to amuse, you could do a Â lot worse). Â Marjorie is a cutie, and tons of fun to be with. Â We also had dinner with my Aunt Joan and Uncle Chuck and their kids and grandkids, visited with my Uncle George and Aunt Laura, and had another dinner with Joan and Chuck. Â And finally, we visited the Peabody-Essex Museum, an excellent place full of artifacts from around the world. Â (Salem was a major center of the Chinese trade, and many of the more curious items brought home by her sailors are now in the Peabody-Essex Museum. Â If you ever find yourself in Salem, make sure you take a break from the witch-related tourist schlock to visit the Peabody-Essex.)

Then, after three nights in Salem, we hit the road and headed west. Â The next stop was Schenectady, New York. Â My cousin Joan lives there, and we had a wonderful dinner with even more wonderful conversation at her house. Â I had a great time catching up with Joan, who I have seen all too rarely over the past few decades. Â For me, a special bonus was getting to know Joan’s husband Martin. Â While I had met him on a couple of occasions years earlier, this was the first chance I had to sit down and really talk with him. Â We had a lot in common, both having spent a lot of time working on engineering teams of one sort or another, often working with folks from around the world. Â All in all, it was a stop well worth making.

While we were in the Schenectady area, Julie and I also stopped and visited the Saratoga Battlefield. Â The battlefield is beautiful, on the shore of the Hudson River, spread out over a large area. Â The battle itself included several clashes and fortifications, and the views and quite scenic. Â I recommend it.

Here’s a deer we saw on the battlefield. Â Occupied with eating his apple, he didn’t seem to care when we drove up right next to him to take a picture. 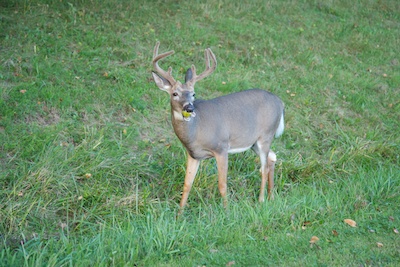 And here Julie and I are set against one of the lovely battlefield vistas: 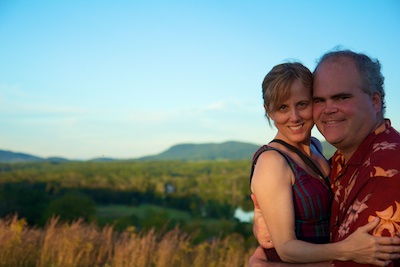 It’s only when looking at pictures like this that I realize just how large I am compared to Julie. Â Now you can see why I call her my better third!

While driving away, we saw this lovely barn set against a beautiful dusk sky: 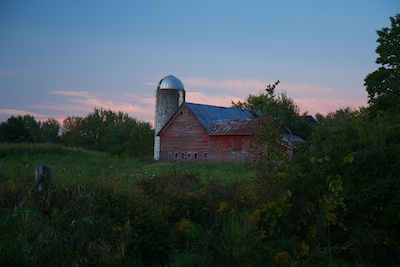 Then it was off to our next stop. Â That was Seneca Falls, New York. Â In 1848, Seneca Falls was site of the meeting that started the American women’s suffrage movement. Â Julie was particularly interested in visiting given her recent interest in that area of history. Â There isn’t much left of the church where the meeting was held, but the visitor’s center was nice and we got to visit the Elizabeth Cady Stanton home.

But in addition to women’s suffrage, we found a special bonus to our visit. Â It turns out that Seneca Falls was most likely the inspiration for Bedford Falls, the setting of “It’s a Wonderful Life.” Â It seems that Frank Capra visited Seneca Falls when preparing to make the movie. Â Further, several of the locations mentioned in the movie are nearby. Â Finally, there are several locations in town that seem to be inspirations for sets in the movie, including the bridge where George met Clarence: 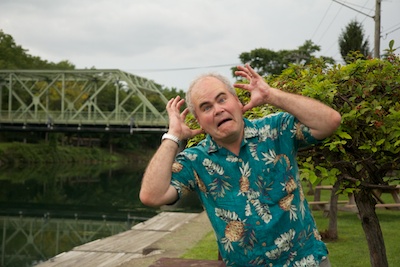 Then it was back to the road, on the way to our final stop. Â But that will have to wait for another blog post…

One Response to The great northern road trip