I’m now living the pharaoh’s life, cruising down the Nile on a pleasure barge complete with beautiful scenery, abundant tasty food and beverages, and a boat full of people here to cater to my every need. I’ve even got a massage scheduled for after lunch. Â Sometimes life is good, and this is definitely one of those times.

But I am a bit behind on blogging due to connectivity issues. Â So this will describe the events of Friday, our first full day in Egypt. Â And a marvelous day it was.

It was a day that started awfully early. Â Due to the shifts in our schedule, we were on a ridiculous timeline. Â Up at 2:00 AM, onto the plane by 5, a touchdown at Aswan where we sat on the ground for an hour, then off to Abu Simbel. Â Good thing I was still jetlagged: getting up at 2:00 AM wasn’t much different than getting up at any other time would be. Â (This is the Joe patented cure for jetlag: get your system so discombobulated that it will accept any sleep you give it.) 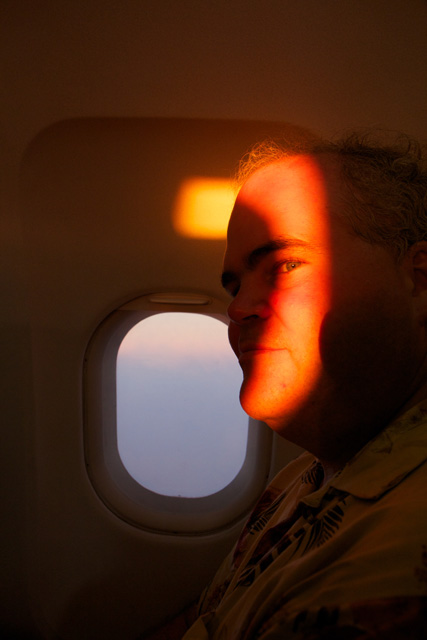 After all that, we reached Abu Simbel at around 10:00 AM. Â What a terrific place! Â This is the site of two temples: one built in honor of Rameses II, who was king of Egypt for 60 years around 1200 BC, and one honoring his wife, Nefertari. Â Rameses’s temple looks like this (note the people for scale: those statues are 60 feet tall): 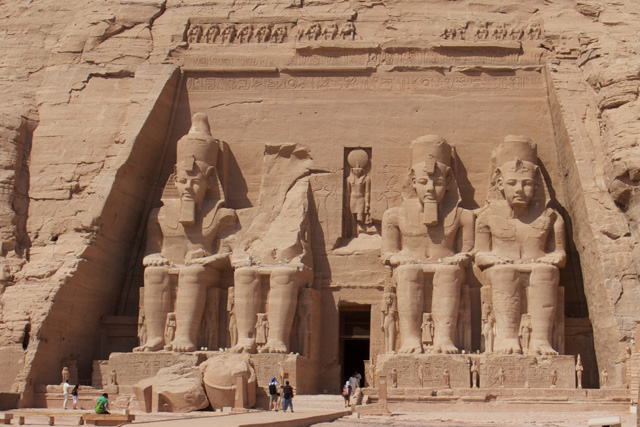 Or that’s how it looks today. Â Around the time they were building the Aswan High Dam back in the 1960’s, they realized that Abu Simbel, which is near the southern border of Egypt, would end up under water. Â So there was a great engineering effort made to move the two temples up the hill. Â Here’s a model showing the original location and where it was moved: 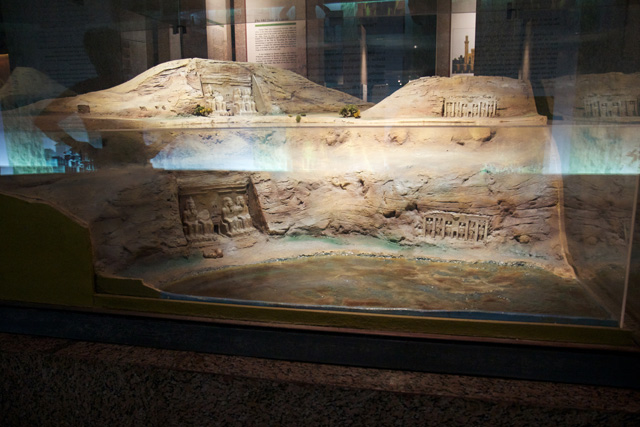 And here’s several pictures of the two temples. 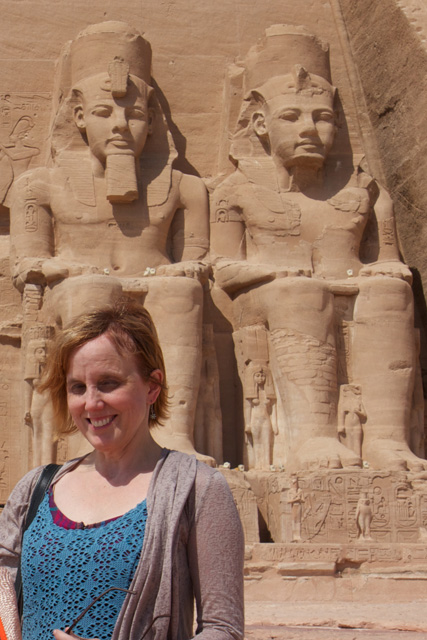 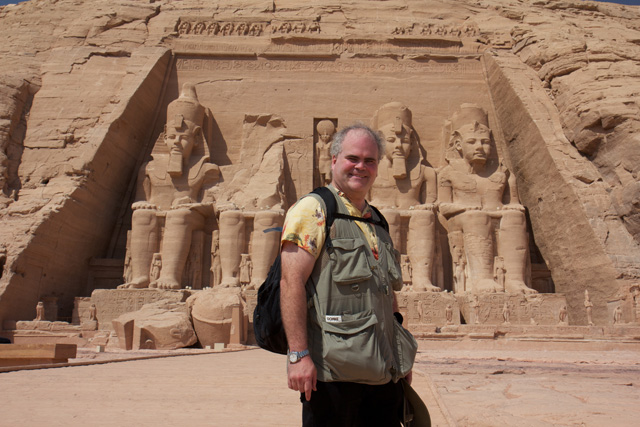 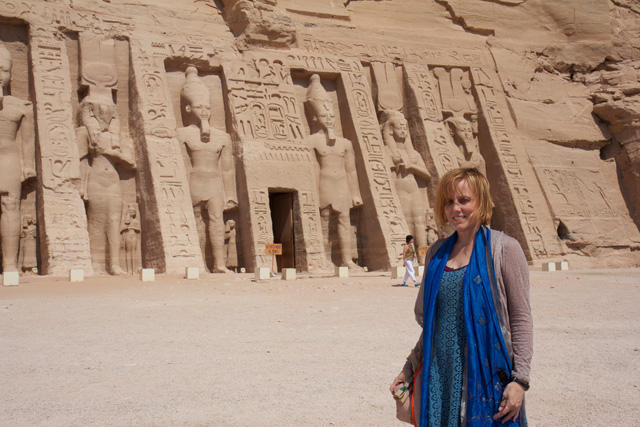 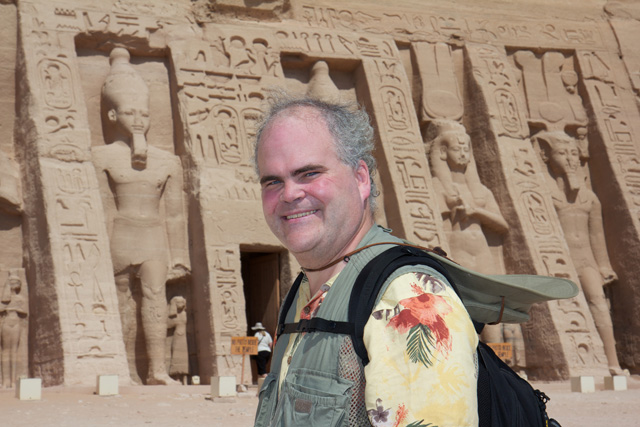 After that, we flew back to Aswan. Â In ancient times, Aswan was the southernmost city of Egypt. Â (The Egyptians occasionally conquered parts of Nubia, which is south of Aswan. Â But Aswan marked the border between Nubia and Egypt proper.) Â It was also the location of the first cataract, or the southernmost point of the Nile where the river was always navigable.

Now Aswan is the location of the High Dam, built by the Egyptians in the 1960’s to control the Nile and free them from the endless cycle of annual floods. Â And that was our next stop: 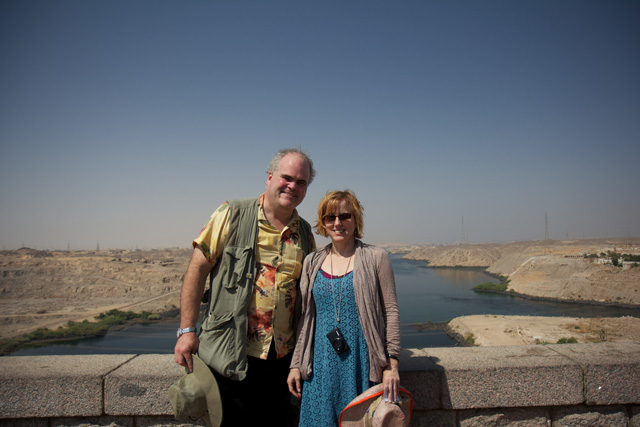 After that, we joined our boat, the Tulip. Â She was docked in Aswan, in view of Elephantine Island (where the ancients built temples and fortresses). Â The river here is beautiful, with scenic tombs overlooking the water where sail the feluccas, small boats that cater to tourists. 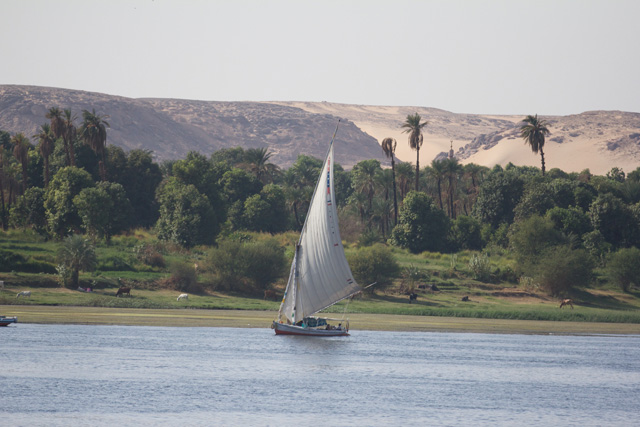 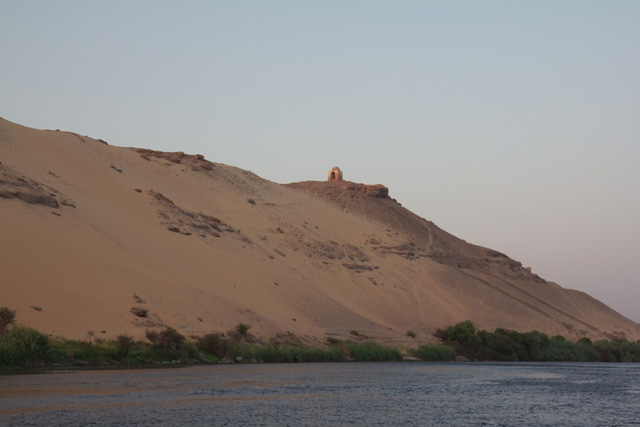 Then a little down time, which meant I walked around Aswan a bit. Â Nothing much to report about that walk: it was hot and dusty and I retreated quickly to the boat for a short massage and a lecture by Heba, a doctor of Egyptology who is accompanying our tour.

After lunch, we went on a ride on a felucca. Â Here’s one of the crew members steering the boat: 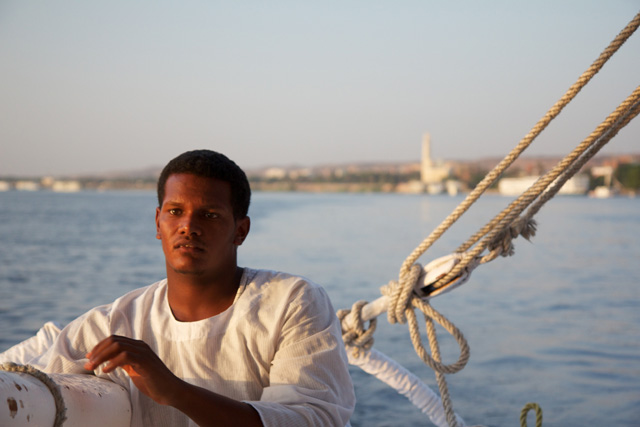 Even Julie enjoyed it, which speaks to how calm the Nile is. 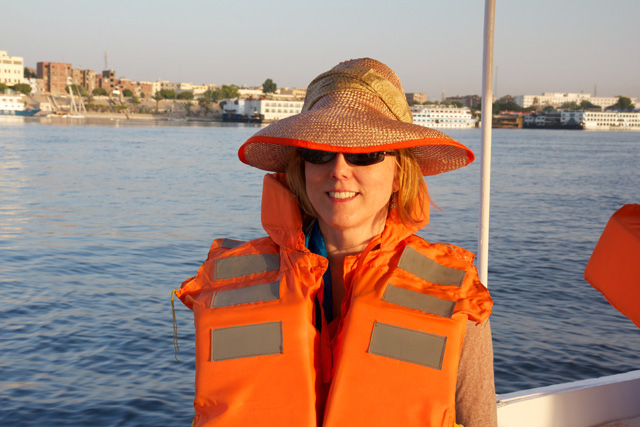 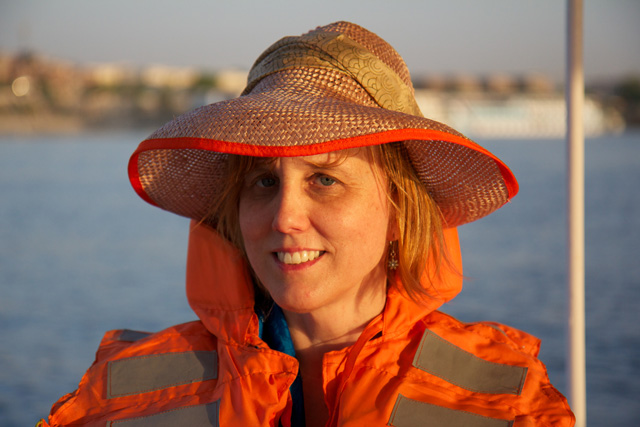 I, of course, loved it. Â (And of course I skipped wearing the life jacket.) 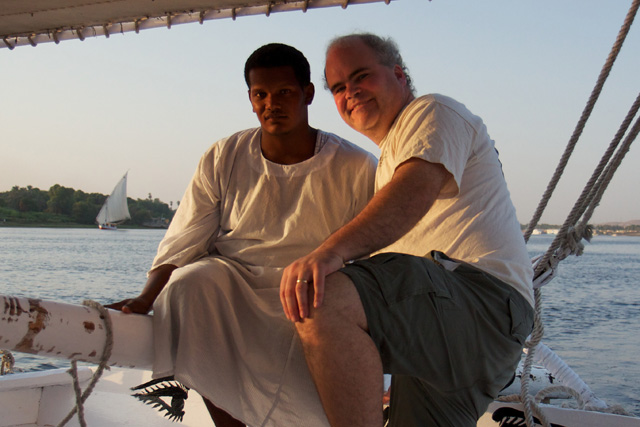 The best part for me, however, was when the captain called me over and let me steer. Â It took a lot more force than steering my Candy Cane, but oh, what fun! 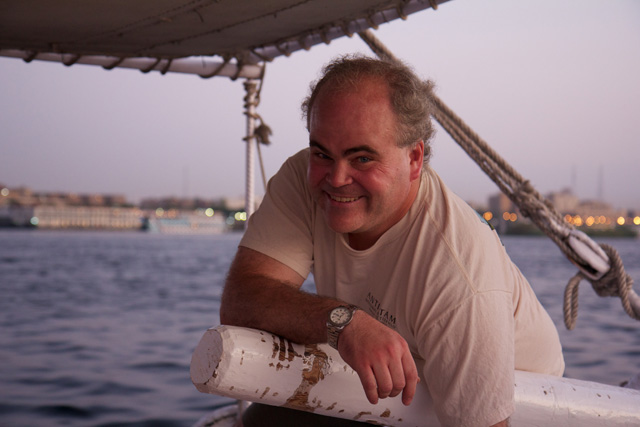 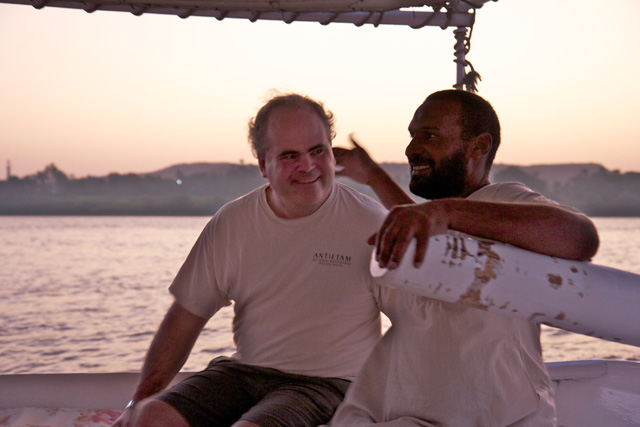 Then dinner, and then a chance to try out some of the photography tricks I’ve learned this summer. 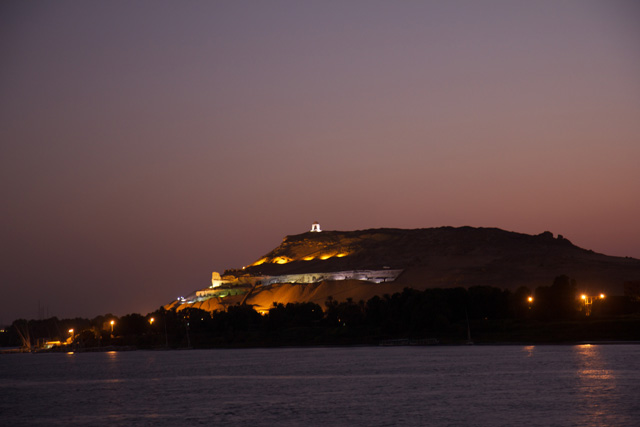 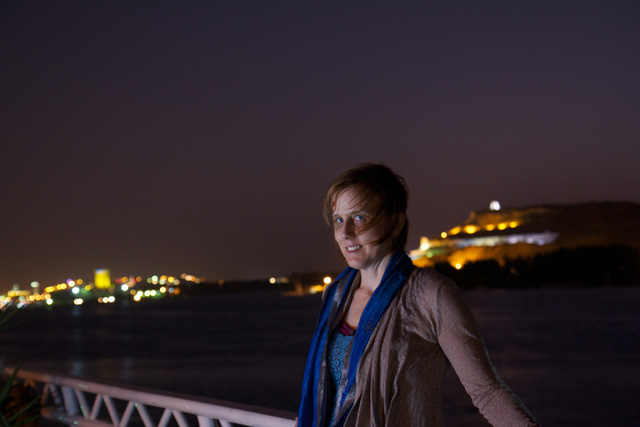 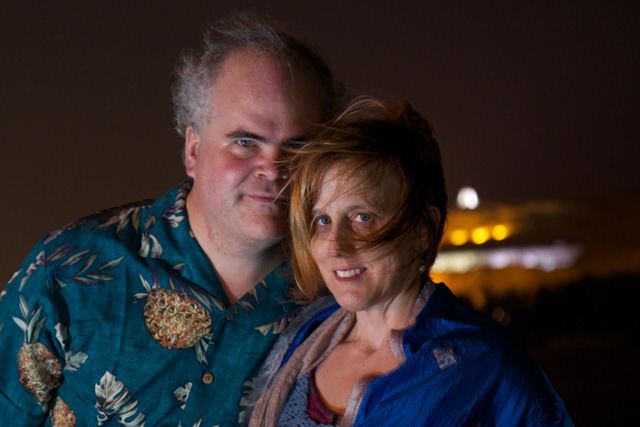 And here’s one last picture, of the show of Nubian dancers and drummers that we watched at night. 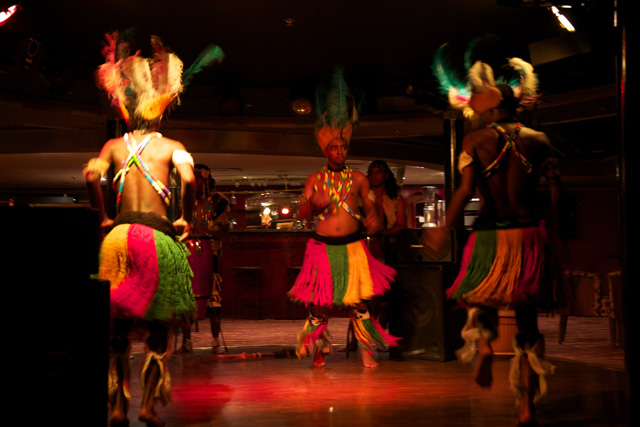 What a terrific first full day!