There it is, across the Nile from the Tulip’s dock in Luxor, the hill that contains the Valley of the Kings. 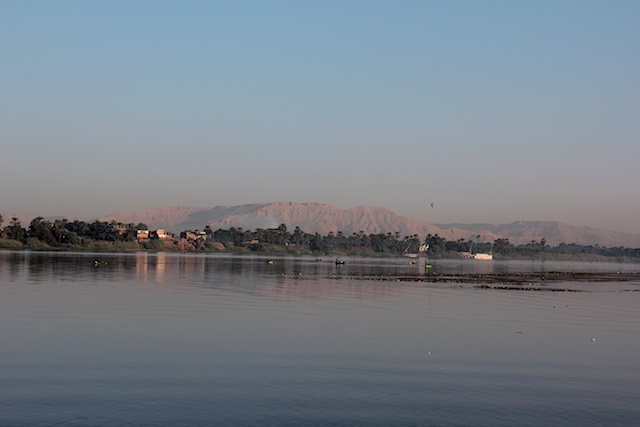 And there it is, our destination this morning. But first, a lesson in the funerary practices of ancient Egypt.

But later, the pharaohs of the New Kingdom (roughly 1500-1000 BC) decided that a pyramid was an open invitation to grave robbers and it was better to put their tombs in a hidden valley. Â With the tombs hidden away, it no longer made sense to put the temple next to the tomb. Â So the pharaohs had their tombs built a few miles away outside of the Valley of the Kings, where most of the New Kingdom pharaohs were buried. Â Most of those temples are in ruins, as they were built on the flood plain. Â But there’s still some impressive remains.

Such as the Colossi of Memnon. 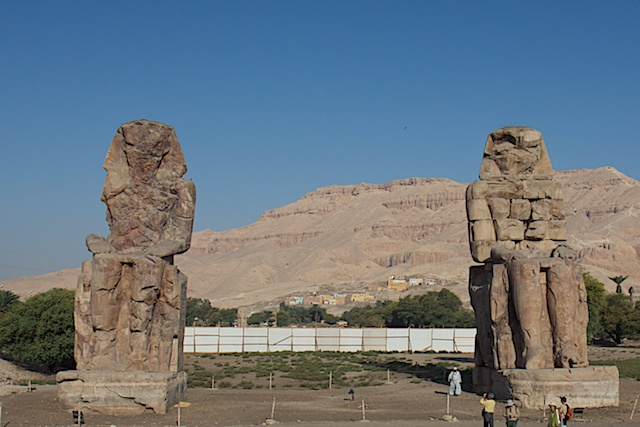 These are twin seated statues of Amenhotep III, about the only thing remaining of his funerary temple. Â (Their name is deceptive: it comes from later Greek visitors deciding that something so grand had to be associated with Agamemnon.) Â I looked on these and said, “Look on my works, ye mighty, and despair!” Â (Click hereÂ if you don’t recognize the line.) Â Though strictly speaking, this was not Shelley’s inspiration for his poem: supposedly, that was another statue about a mile from the Colossi. The statues are rather impressive. Â The Egyptians built on a monumental scale, and these monuments are 60 feet high.

And after that quick photo stop, we all went back to the bus and drove the dusty road up to the Valley of the Kings. Â The tombs looked like this:

Well, sorry. Â I can’t show them to you. Â They don’t allow cameras in the Valley.

Suffice to say, Julie and I went into five tombs including King Tut’s, which was by far the least impressive of the five. Â But his mummy was on display, so I was able to pay my respects to the late lamented boy king.

The tombs were beautiful, with walls covered with art and hieroglyphs showing the pharaoh’s trip to the afterlife. Â It’s amazing, the amount of work that went into these works of art, works that were not meant to be seen by anyone other than gods and dead kings. Â But at least it kept artists employed: think of it as an ancient Egyptian stimulus package.

We were wandering up one part of the valley, looking for the chance to see the tomb of one particularly noteworthy pharaoh, Tutmose III, known due to his military prowess as the Napoleon of Ancient Egypt. Â I knew it was closed for that day, but I wanted to get a good look at it.

One of the guards, a skinny man carrying a big rifle, offered to let us climb up to the tomb. Â (Tutmose had his tomb built high up a defile, a vain attempt to discourage tomb robbers.) Â The guard let us climb under a rope, up a narrow staircase, and down another staircase to the gated entry to the tomb. Â Quite the strain, but pretty neat. Â As we were on our way back, he smiled and held out his hand.

Needless to say, I did not stint.

(I’ve heard that many men who offer you camel rides near the pyramids pull a similar stunt in which they take you out into the deep desert before asking for baksheesh. Â Mark Twain wrote of a similar situation in which the guides who took him up the pyramids waited until they were near the treacherous, steep top before asking for payment. Â I expect Herodotus suffered similar shakedowns when he visited these parts.)

A positive outcome: Julie was starting to fade due to the heat and lack of sleep, but after climbing up that rickety staircase she had an adrenaline rush and an accompanying second wind.

Anyway, here’s a couple of pictures from outside the gate. Â You can get an idea of the conditions in the valley: hot, dusty, and very dry indeed. 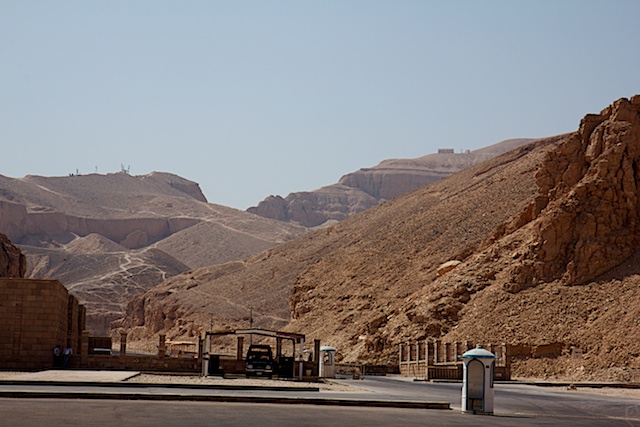 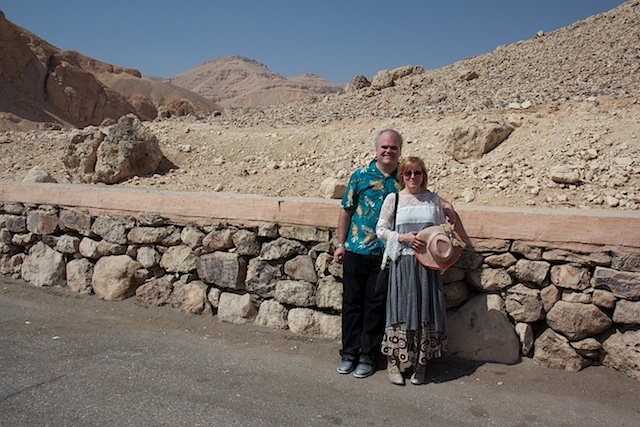 After the Valley of the Kings, we went to the funerary temple of Hatshepsut. Â Hatshepsut was an interesting figure. Â The widow of King Tutmose II, she decided that she wasn’t ready to turn over power to the teenaged Tutmose III. Â So she ruled Egypt as a female king. Â (The Egyptians did not have a concept of queen. Â The closest they came was the King’s Chief Wife, but you can’t really be a ruling Chief Wife.)

But because a female king wasn’t really kosher, Â she had monuments made showing her as a man. Â Further, she spread word around that her father was the god Amun, the chief god of Egypt. Â (This kind of retroactive godly parenthood was common among pharaohs when there was any question of their legitimacy.) Â Her funerary temple, framed by cliffs and with a pleasing symmetry, is regarded as possibly the finest piece of architecture from ancient Egypt. Â I certainly liked it. 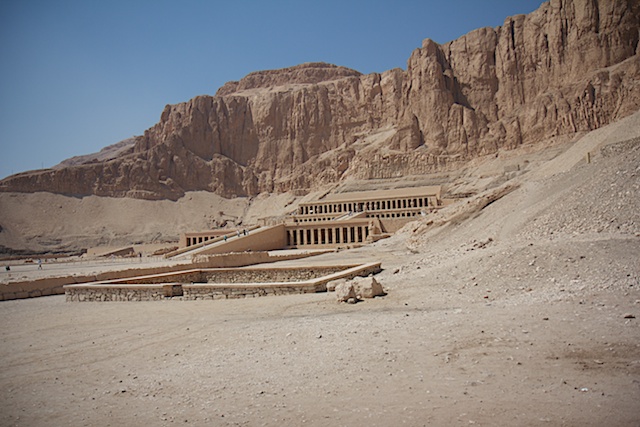 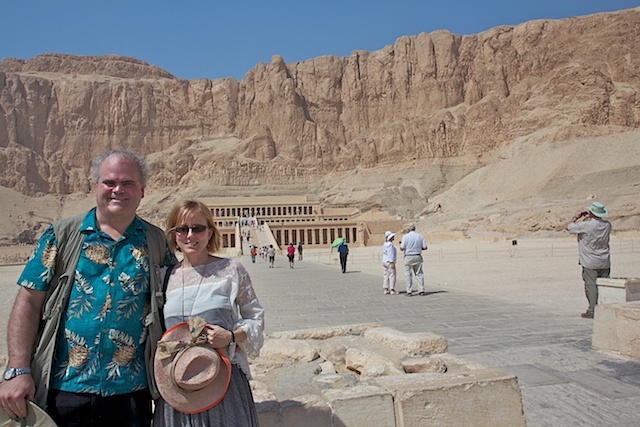 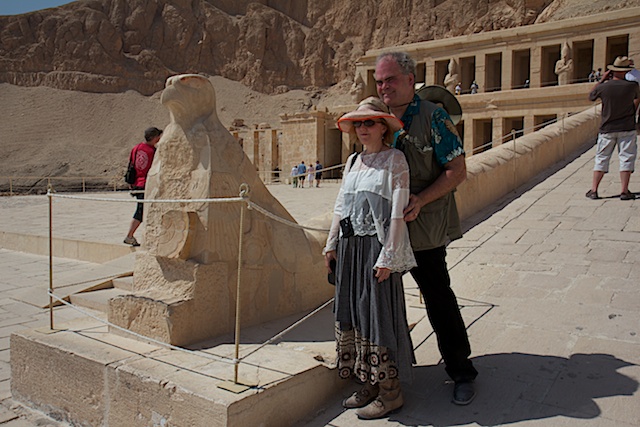 As part of her self-deification, Hatshepsut had told the story of how she was nursed by Hathor, the mother-goddess who often took the form of a cow. Â Here’s a depiction from the wall of the temple. 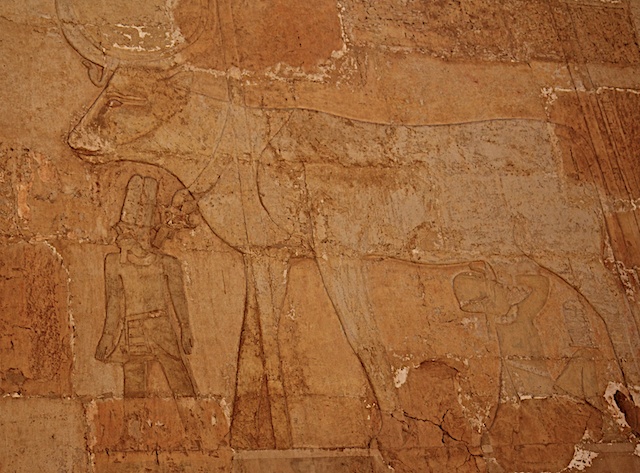 After that, a hot and dusty morning, we returned to the boat for some rest.

And another example of the dustiness of the desert: I brought two identical pairs of shoes with me. Â The shoe on the left is the one I wore to the Valley of the Kings. 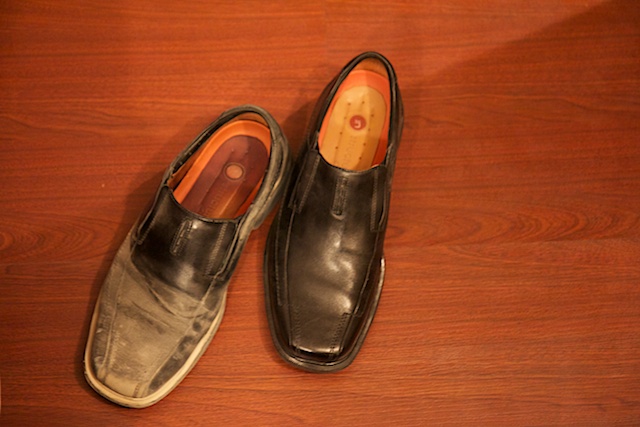 In our first hotel in Egypt, there was a model of a model found in Tutankhamun’s tomb of the boy king riding in a boat. Â The model was titled, “King Tut in a Boat.” Â The phrase stuck in my mind, and I decided that I had discovered my new epithet.

You hurt your toe. Â “King Tut in a boat,” you shout, and feel a bit better.

You are surprised. Â “King Tut in a boat,” you exclaim.

It’s a good all-purpose phrase, and I intend to use it where once I might have been tempted to use harsher language.

Monday evening we visited Luxor Temple as the sunset and the lights came on.

King Tut in a boat!

Imagine a road lined by sphinxes. Â It leads to a vast edifice with entrance flanked by an obelisk and a pair of seated statues in various states of decay. Â You pass through the entrance and find yourself surrounded by a row of columns of enormous girth and height. Â Past that is another set of columns, slightly smaller than the first but of more delicate design. Â All around is statuary, some vast, and bas reliefs, many of extraordinary beauty.

King Tut in a boat!

It was amazing. These photos don’t really do it justice. Â But they’re the best I have, so I share them with you. 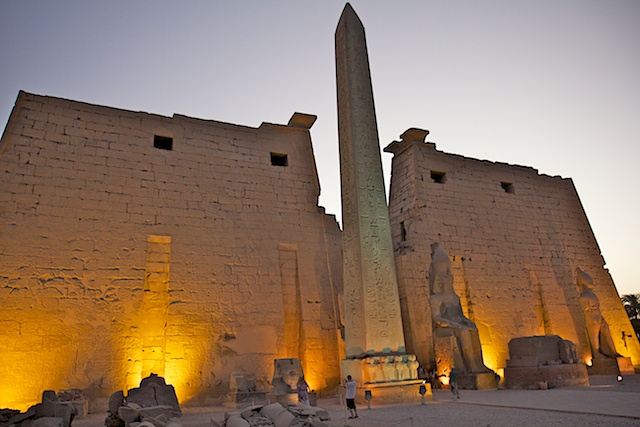 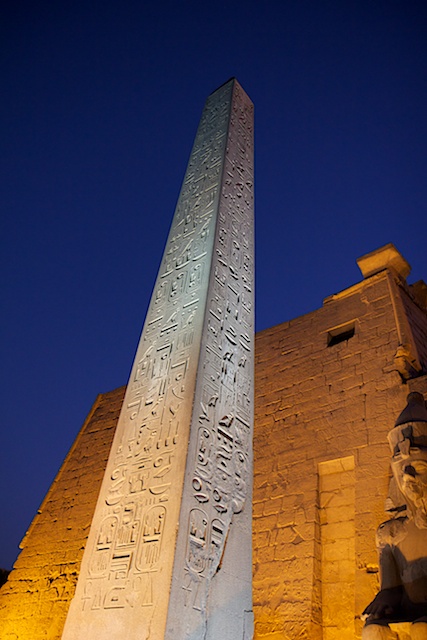 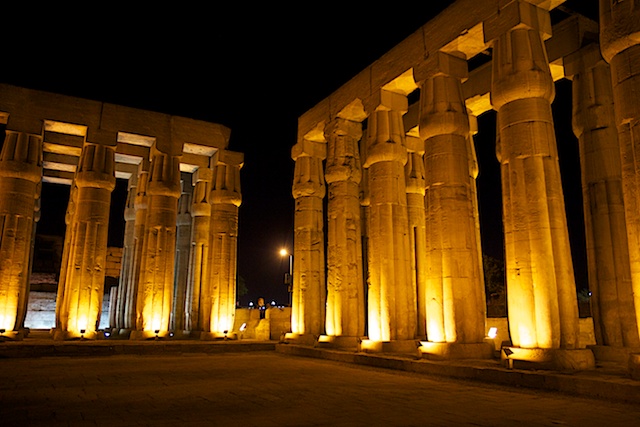 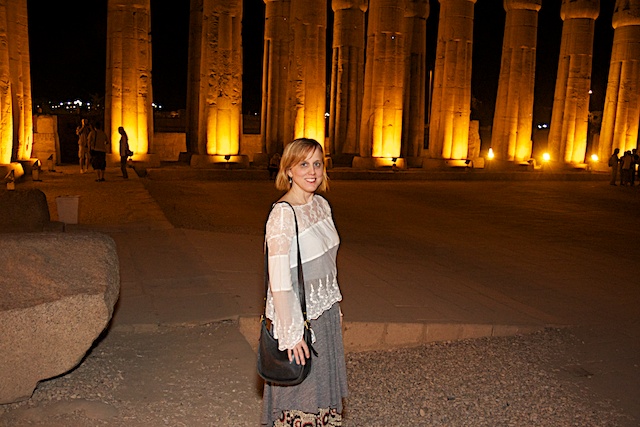 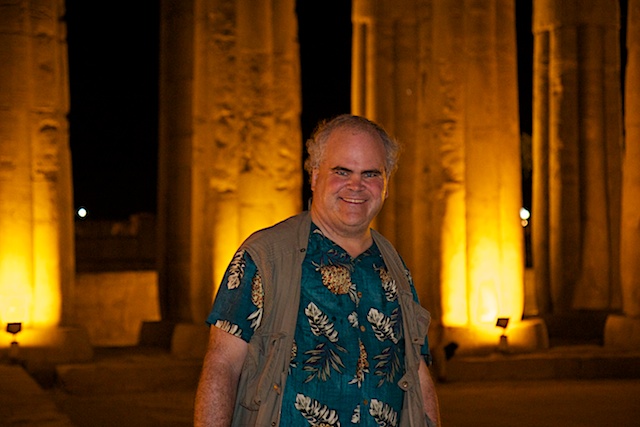 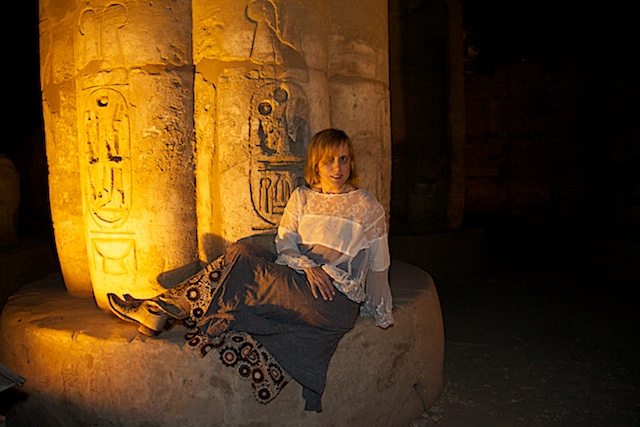 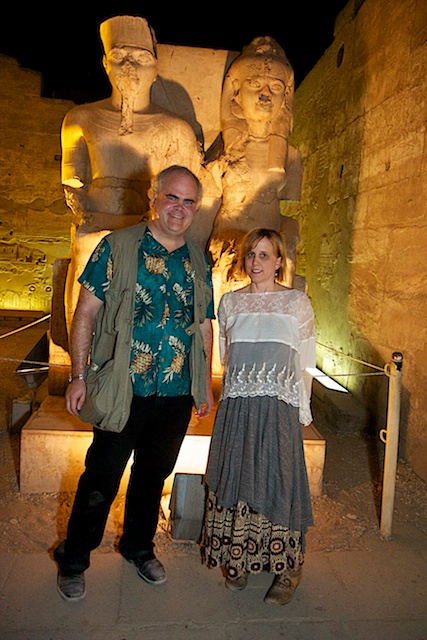 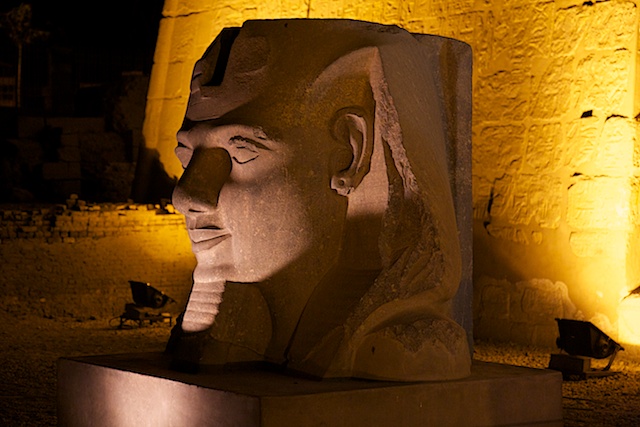 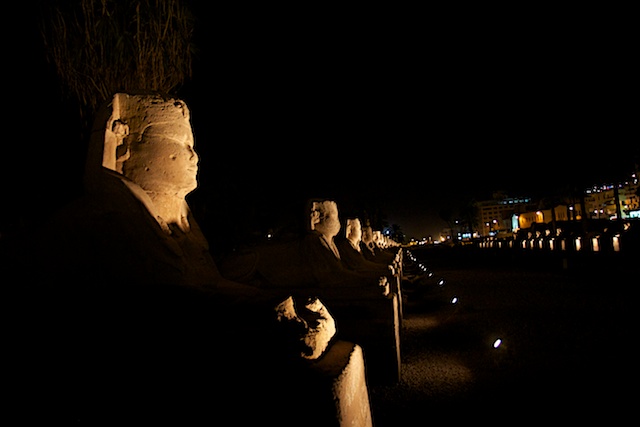 Our guide Karima said, “Luxor took only a short time to build. Â It only took about 200 years.” 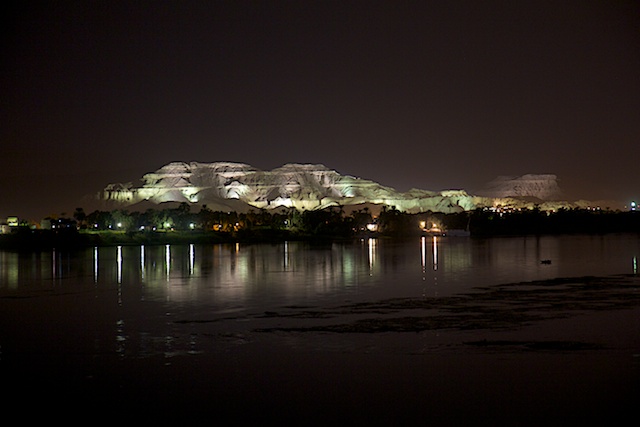