If this is Wednesday…

Then it must be the Pyramids.

Well, almost. Â First, I started the morning with a short walk near the hotel: 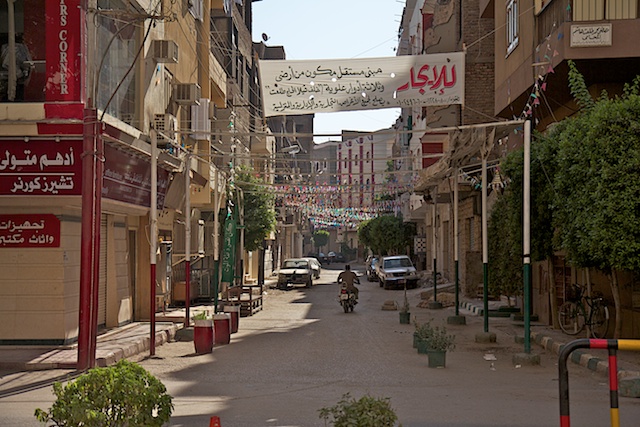 Then we went to the Luxor Museum. Â No pictures, alas, as no cameras are allowed inside. Â But the works of ancient Egyptian art were amazing.

My favorite was a room set aside for the Amarna period art done under Akhenaten. Â Akhenaten was a fascinating figure, probably my favorite pharaoh. Â He started his kingship as Amenhotep IV. Â But soon after he came to the throne, he decided to abandon worship of Amun and the other Egyptian gods. Â Instead, he worshipped a minor Egyptian deity called Aten, or the sun disc. Â He ordered traces of Amun removed from the temples, changed his name to Akhenaten, and became the first monotheist in history.

But that wasn’t all. Â He had a new capital city built. Â And he initiated an entirely new art style that looks surprisingly like the modern art of Mondrian. Â Those pieces also included a high level of realistic depiction of day-to-day life, including the first pictures of a king being romantic with his wife and playing with his children.

I find that style to be astonishingly beautiful, and found myself surprisingly moved by the art at the Luxor Museum. Â There’s one large piece put together from found fragments that shows an entire town of workers, brewing beer, planting grain, making pots, cooking bread. Â A group of bearers take this work and carry it to the king. Â He raises it to the sky as an offering to Aten, who is always represented as a sun disc with the rays as arms reaching down hands to accept the offerings. Â In the next scene, Aten gives to the king symbols of life and prosperity, which the king presumably shares with his people.

It’s an astonishing work of art for all sorts of reasons, including the fact that the king is depicted on the same scale as many of the workers. Â (Pharaohs are usually depicted as far larger than anyone other than gods.) Â Also, the king is not depicted as an ideal, as is the case with other Egyptian art, but rather as a recognizably flawed human, complete with pot belly.

If you’re interested, I recommend looking on the net for pictures of art from the Amarna period (named after Akhenaten’s capital).

Alas, Akhenaten’s religion and artistic style died with him. Â In the reign of his son, originally named Tutankhaten but, after his father’s death, renamed Tutankhamen, the Amun worshippers made a comeback, later destroying traces that the Amarna period ever occurred. Â Happily, though, some pieces survived, because they are beautiful.

But I have no pictures, alas. Â Here, however, is a picture of a girl who was begging outside of the museum. Â Interestingly, she looks a little like something with the Amarna style, which showed the king and his family with elongated faces. 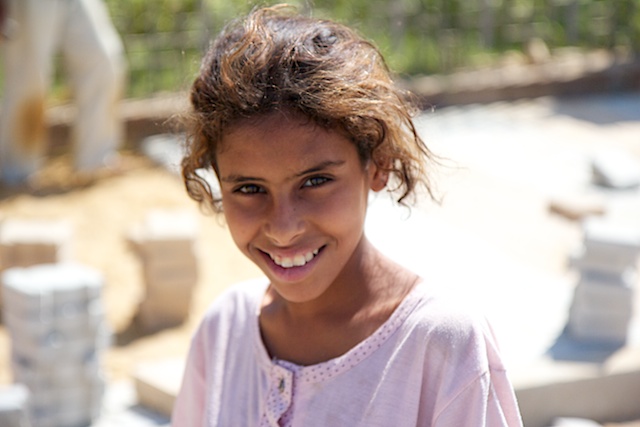 Then it was off to the airport for the flight back to Cairo.

I spent the flight with my eyes glued to the window. Â First to watch the desert flying by. Â Here’s a picture that shows just how sharp the line between red and black lands can be: 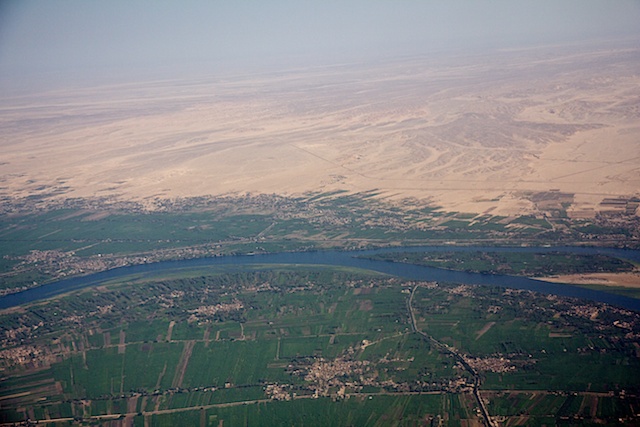 (Sorry for the photo quality. Â Airplane windows do not make good lenses.)

Then, as we neared the end of the flight, I looked down and had my first pyramid sighting: 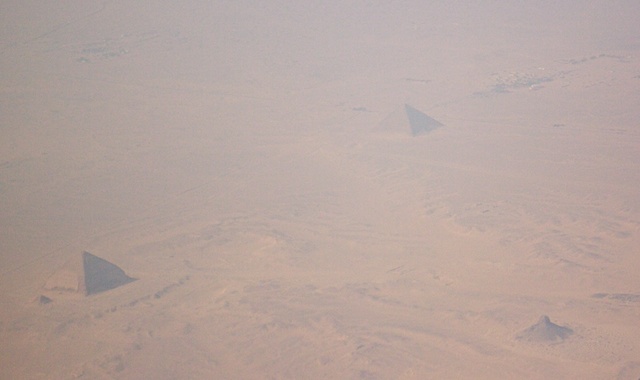 Those are actually the Bent Pyramid and the Red Pyramid. Â I’ll be talking more about these later: we’re scheduled to visit them on our last day in Egypt.

Soon, I spotted the famous three: 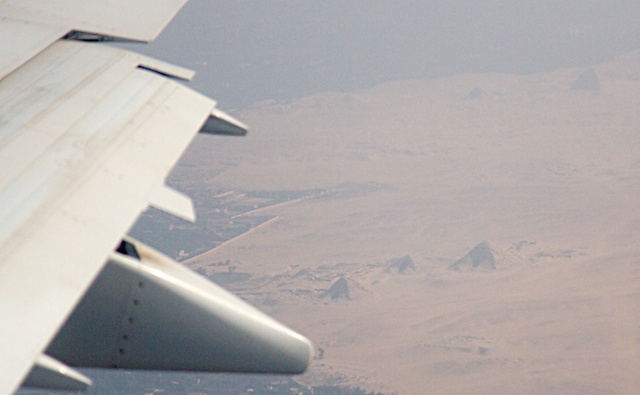 We landed, then got in the bus for our hotel. Â After about 40 minutes driving on the Cairo beltway, we started seeing the Pyramids in the distance. 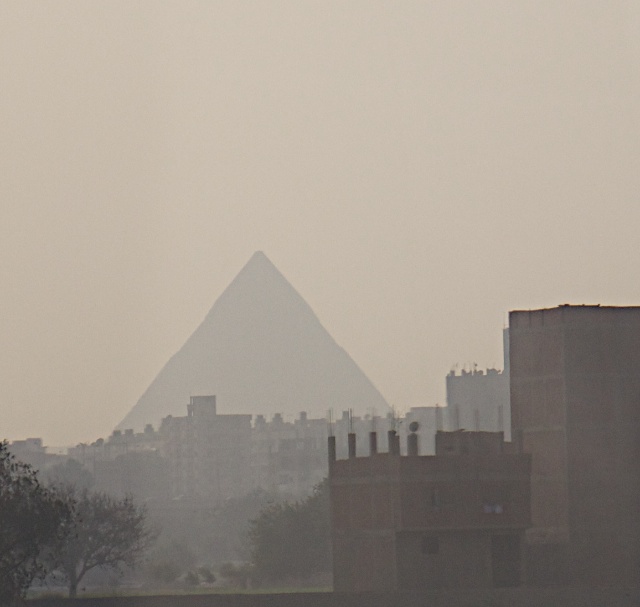 Soon they were getting closer: 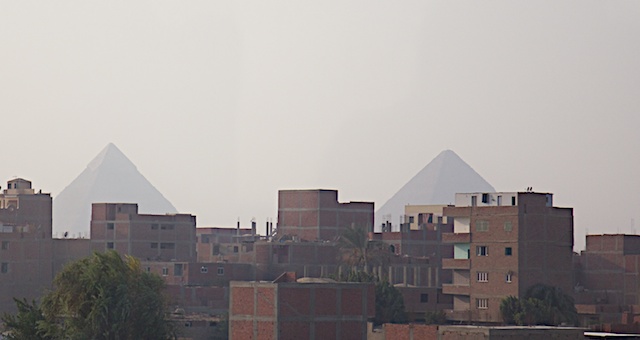 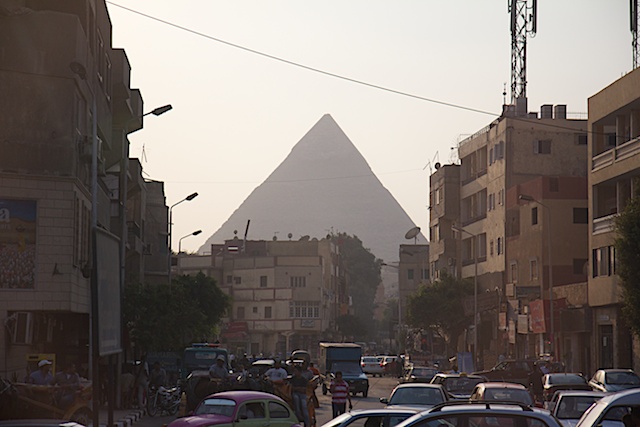 Imagine driving home from work each evening and looking back and seeing a pyramid in your rearview mirror!

We finally reach the hotel and rushed out to our balcony to see these scenes: 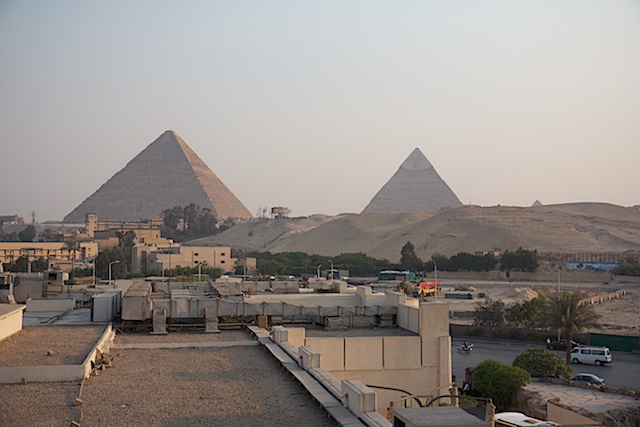 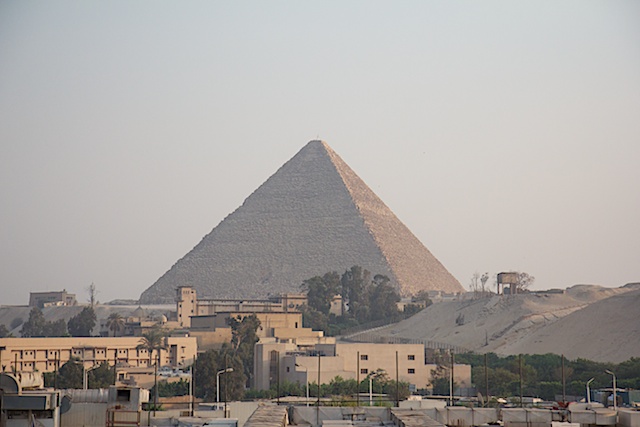 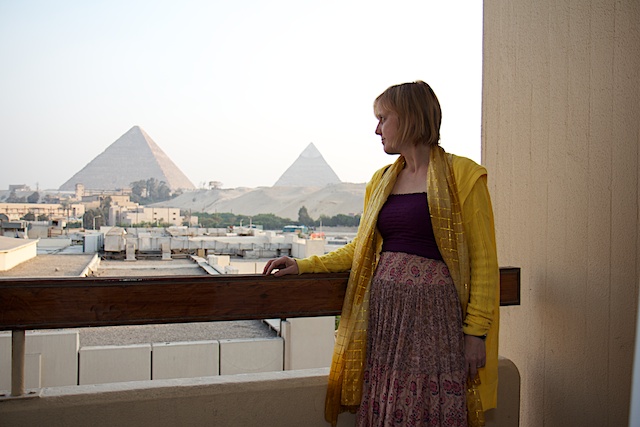 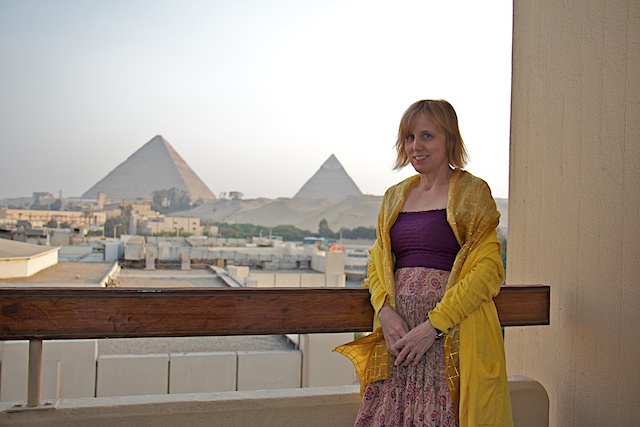 Then we went for a walk around the hotel. Â Within sight of the pool we found, you guessed it… 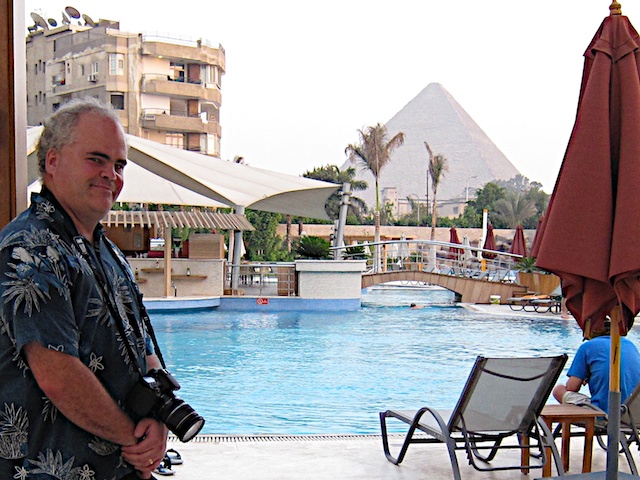 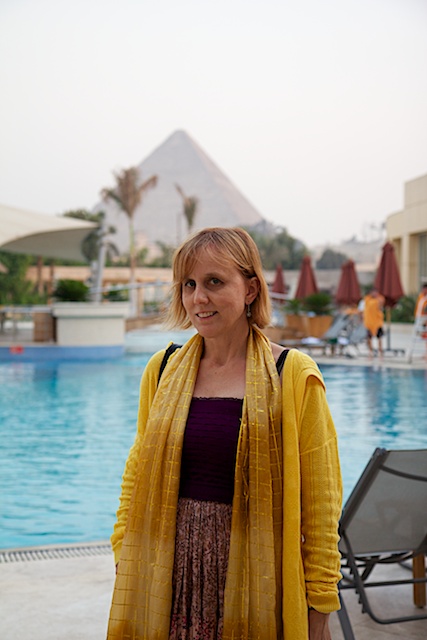 Tomorrow we get to visit. Â I can’t wait!