You know what’s great? Â This is great. 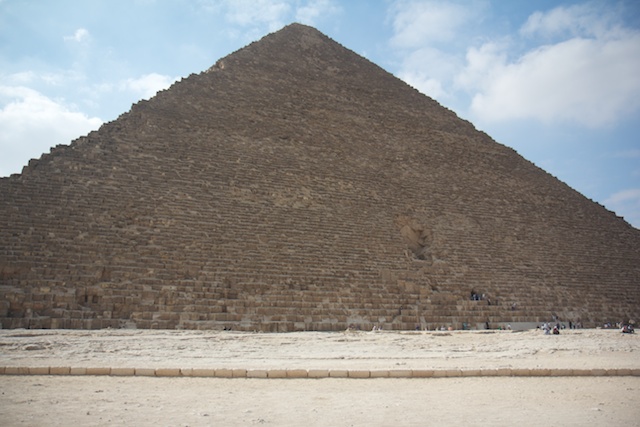 You know what’s awfully nice, but not quite great? Â This. 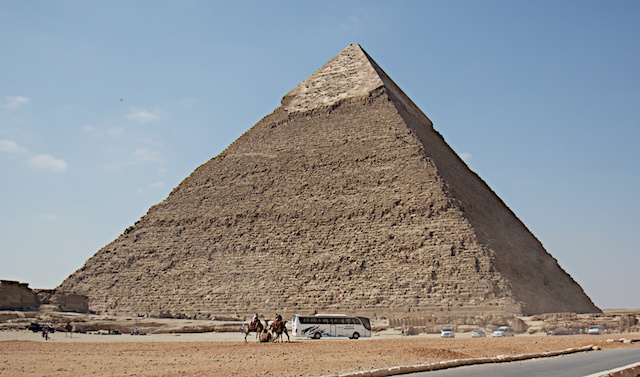 You know what Julie and I visited today? 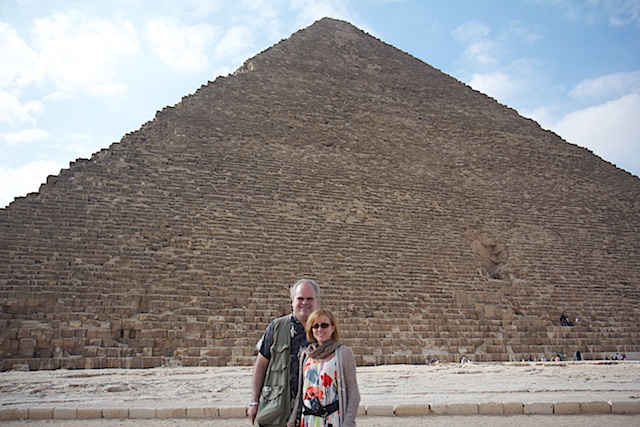 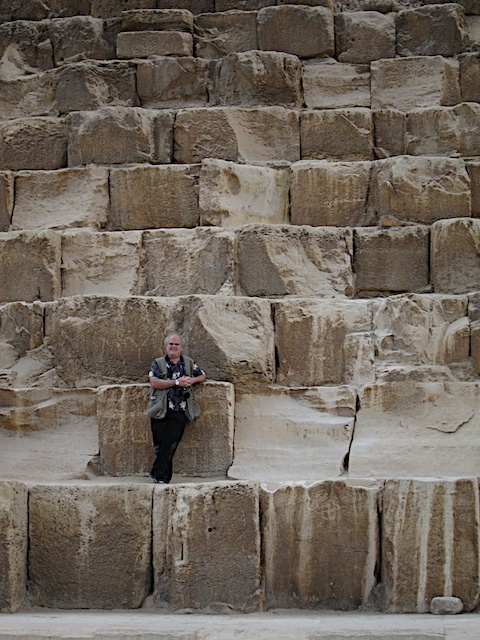 And then you’re forced to admit that the Great Pyramid is, well, great. Â I’ll even grant that Khafre’s Pyramid, the slightly-shorter one, is great too.

Here’s a few more pictures of us with pyramids: 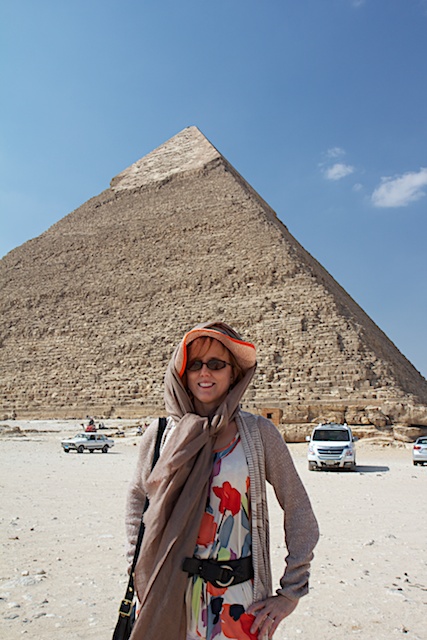 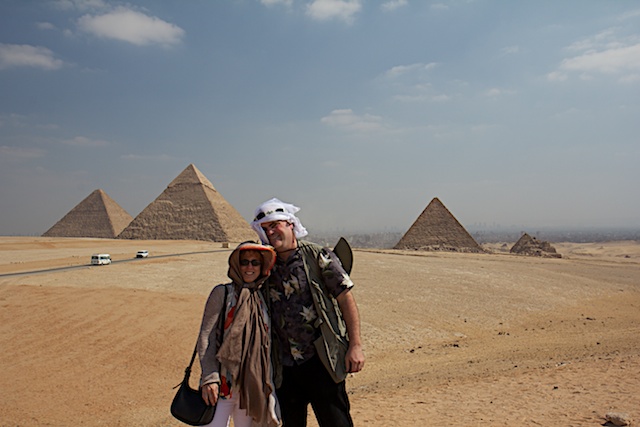 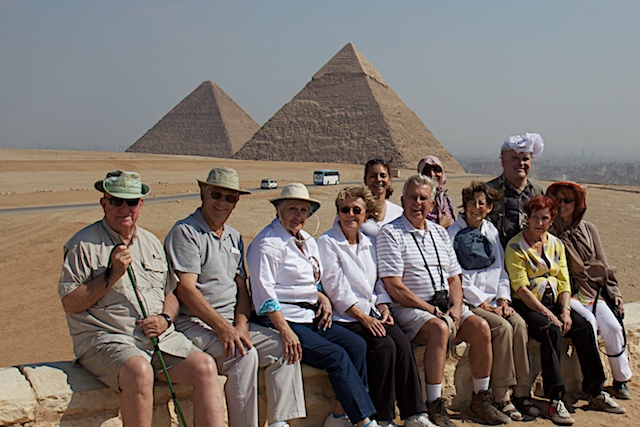 That last one is of the people in our tour group. 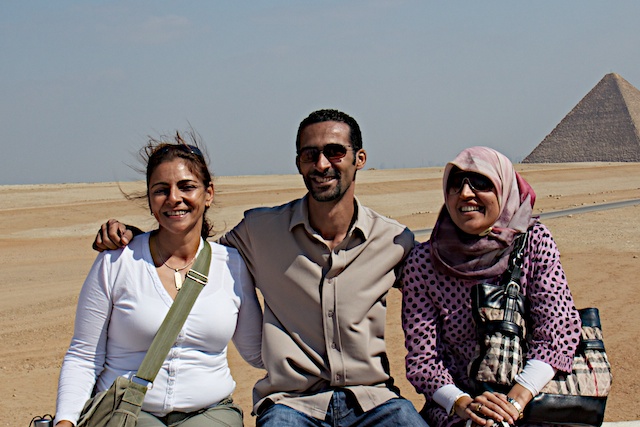 Aside from the pyramids, the Giza plateau is chock full of things that are worth seeing. Â There’s the funeral boat found in a pit near the Great Pyramid where it has been waiting for 4500 years: 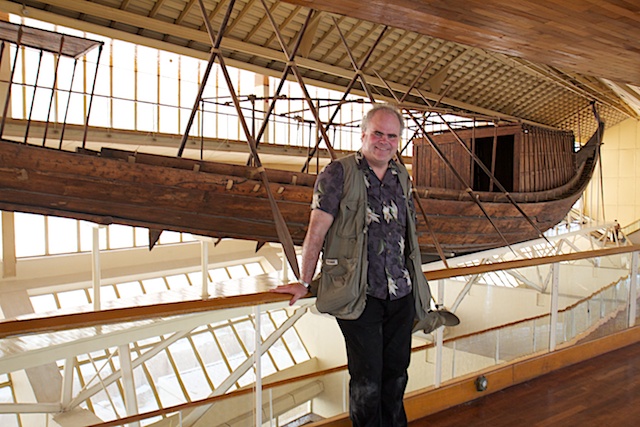 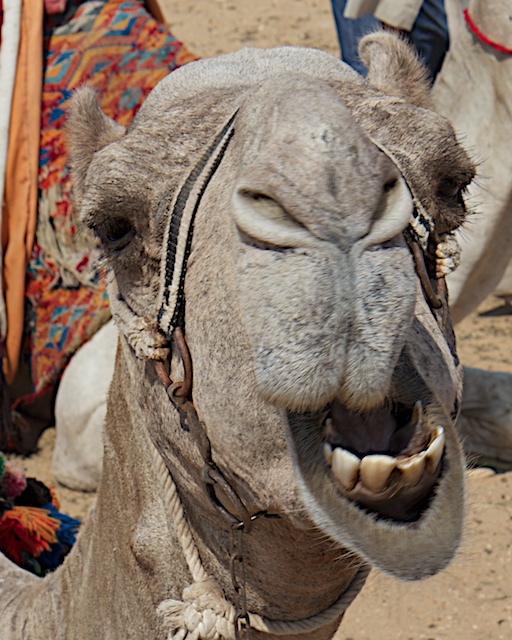 but fun to ride: 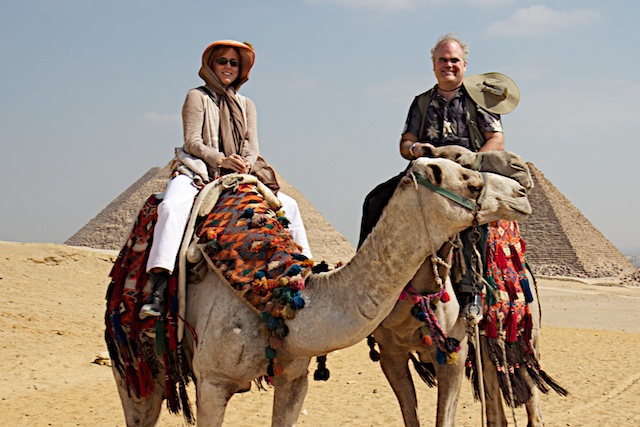 And, of course, there’s the Sphinx.

From the time we started planning this trip, I imagined taking a picture of the Sphinx looking over Julie’s shoulder. Â Alas, we were not allowed close enough for the shot that I wanted, but this will do. 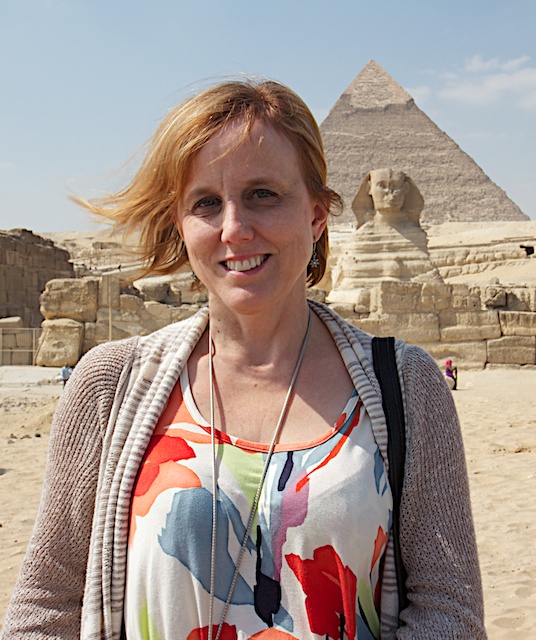 My own experience with the Sphinx was a bit more personal. Â Who knew that the Sphinx is a minx? 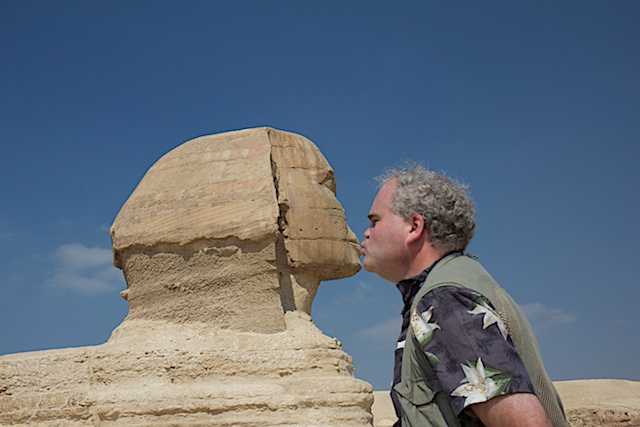 But I’ve got to say, one of my favorite things on the Giza Plateau is the people you find there. Â Like the vendors selling souvenir trinkets. My favorite encounter was with a class of kids on a field trip. Â They were swarming past our slower moving group when I asked one boy if I could take his picture. Â He said yes. 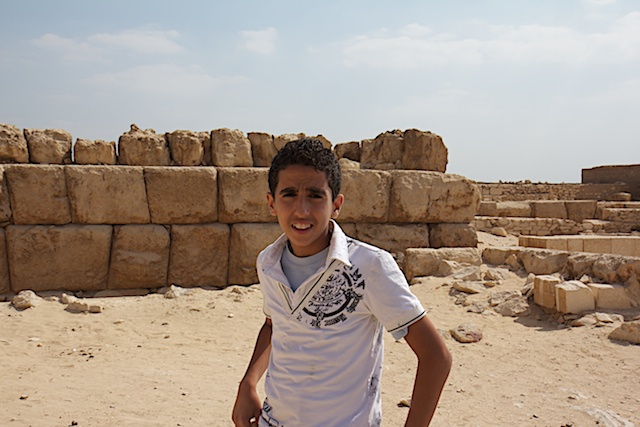 Before we were done exchanging names, his friend popped up and insisted that I take his picture too. 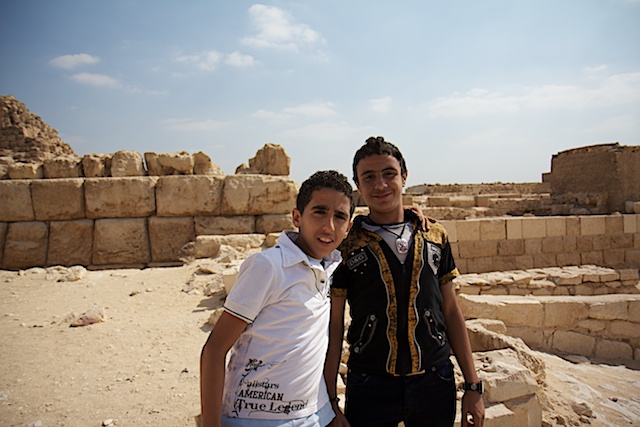 The next thing I knew, I was surrounded by the entire class, introducing themselves and insisting on having their picture taken with me: 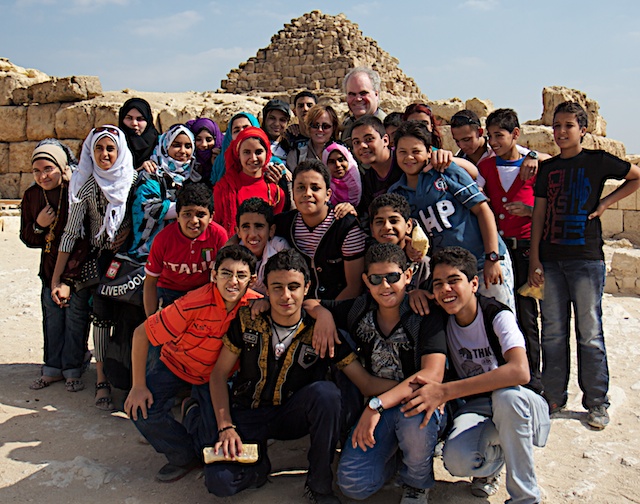 What a terrific group!

After lunch, we visited the necropolis of Saqqara. Â But first, a little history of pyramids.

The first kings of Egypt were buried in mastaba tombs. Â A mastaba tomb is a stone building that encloses a burial shaft. Â We visited one belonging to a nobleman which contained marvelous reliefs on the walls. Â These were scenes of day-to-day life, including one showing boating on the Nile, including a hippo biting a crocodile’s head, and a line of dancers doing what looked like an acrobatic can-can. Â (No pictures allowed in the tombs, alas.)

But a mastaba tomb is not much to look at from the outside. Â So when it came time to build a tomb for King Djoser in around 2700 BC, his architect decided to try something new.

Imhotep, it should be noted, was quite a guy. Â In addition to being an expert architect and engineer, he was also a pioneer of medicine. Â All these talents were enough that the Egyptians later worshipped him as a god. Â Speaking as an engineer, I have only positive views of deifying engineers.

Imhotep got the idea of building a structure consisting of layers of what look like mastaba tombs. Â Taken together, it resembles a large stone wedding cake with five layers. Â This is the Step Pyramid, and in addition to being the great granddaddy of all the pyramids, it’s also the first monumental building made of stone. Â Anywhere. Â It’s in Saqqara, and we visited it. 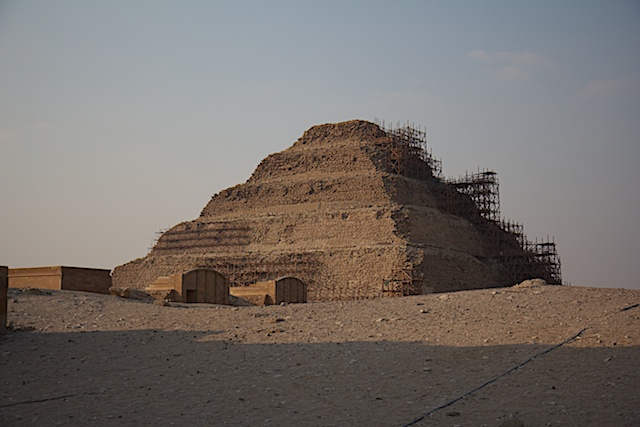 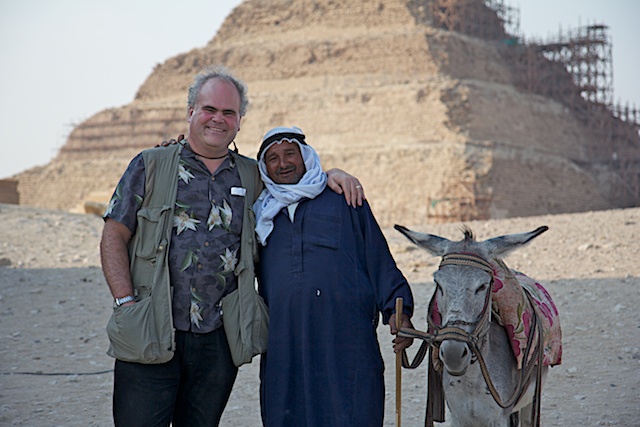 Take a look at this column, found in the funerary complex of the Step Pyramid. 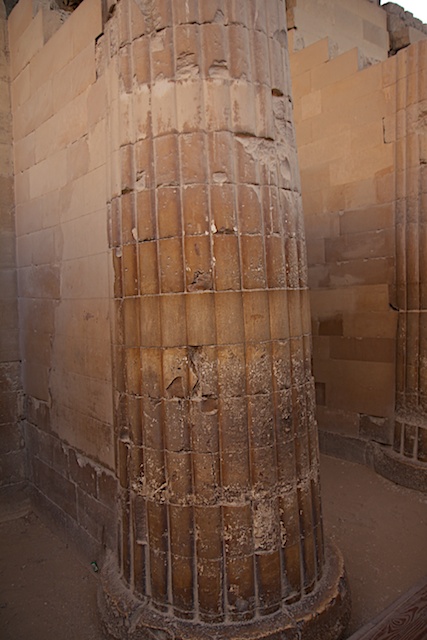 That’s another one of Imhotep’s inventions. Â No wonder they deified the guy.

After the Step Pyramid, the architects of King Snefru invented the first true pyramids. Â We’re visiting those on Sunday, so more on them anon. Â Then came the Great Pyramid and the others on the Giza plateau.

After Giza, the Egyptians started getting a bit lazy. Â They decided that, given that they were facing the pyramids with limestone, there wasn’t much point building it out of stone. Â So they switched to using cheaper mud bricks for the body of the pyramid.

But there’s a problem with this. Â Over the years, the limestone facing falls away, or people strip it to use the stone in other projects. Â This isn’t a problem when you have a stone building beneath the facing. Â But if you have built the substructure out of mud brick, you have problems. Â It may only rain three inches a year in Cairo, but that can really add up over 4000 years. Â So those mud brick pyramids have largely decayed into piles of dirt. Â Here’s one: 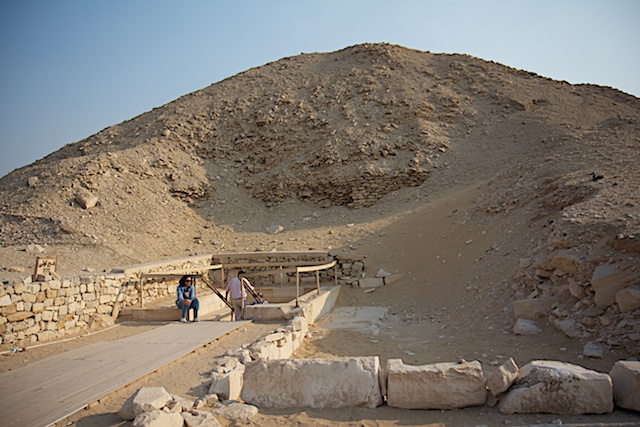 That’s the pyramid of Teti. Â We went into it, a low crawl to see a stone chamber decorated with hieroglyphs.

After that, it was back to the hotel. Â There was nothing scheduled for the evening, so Julie and I went off on a dinner cruise on the Nile.

There was also a show. Â The belly dancer was good, but the whirling dervish was amazing. 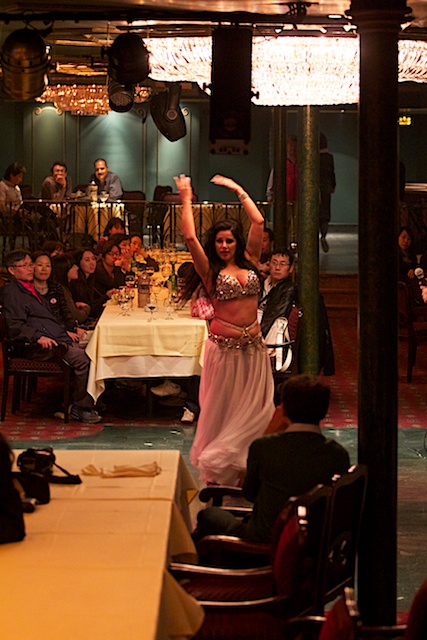 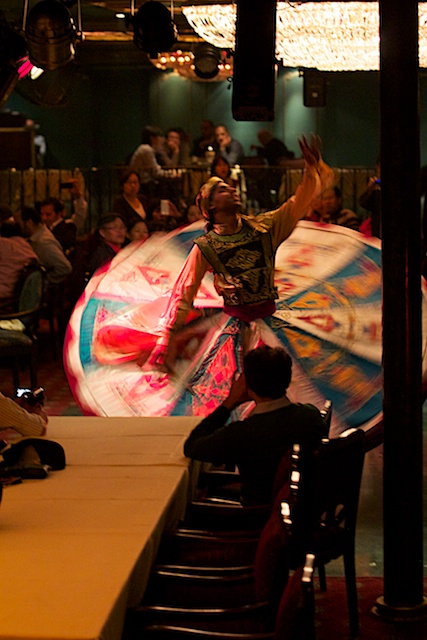 The dervish, wearing a long skirt, spins around with a beatific expression, and the skirt raises and makes him look like a top. Â Then the lights go out, his skirt lights up, and he starts to resemble an amusement park ride at night. Â Good stuff.

And so ended what has been my favorite day in Egypt.