The Egyptian Museum. Â Home to the greatest collection of Egyptian antiquities in the world. Â Akhenaten’s statues. Â The Narmer Palate. Â A dozen royal mummies. Â All of that amazing King Tut stuff. Â No photos allowed.

Today we went there. Â But, well, you read the last line. Â It was a truly amazing collection, and I have no pictures to share. Â Sorry.

But I do have one anecdote. Â  Back around 1880, a cache of mummies was found in the Valley of the Kings, a cache believed hidden by priests who feared that tomb robbers would find their late charges. Â Upon examination, it turned out that the mummies included a number of pharaohs from the New Kingdom, including many of the ones that have featured prominently in this blog. Â Tutmose III, the Napoleon of Egypt. Â Hatshepsut, the female king. Â Rameses the Great, who ruled Egypt for 63 years and left statues of himself up and down the Nile valley. Â All dead for over 3000 years. Â Today I looked them all in the eye.

Well, I looked them in the face: while the heads included many teeth, some in surprisingly good shape given that the Nile was not fluoridated, there really weren’t any eyes to speak of.

Rameses the Great is particularly worth noting. Â Some believe that he was the Pharaoh of Exodus. Â If that’s the case, Rameses is the only figure mentioned in the Bible who you can look at face to face, at least this side of judgment day.

Operating on the assumption that this was the case, I positioned my face above the glass case enclosing Rameses. Â Giving him my best glare, I said, “Let my people go!” Â And what do you know, my people are no longer in slavery in Egypt. Â Me and Moses, huh?

After that, we had two of the more interesting events of our trip. Â At lunch we met two of the men who led the Egyptian Arab Spring Revolution of last January. Â At dinner we met another two, these young women.

I’m going to have a lot more to say about these meetings and about the effect of the Revolution on this country in a future blog post. Â It deserves an entry of its own. Â The Egyptian people, their idealism and energy, are inspiring. Â But deciding what to say is going to take some thought.

Anyway, it seems just wrong to finish a post without any pictures, so I leave you with this, a scene from Julie’s lunch. 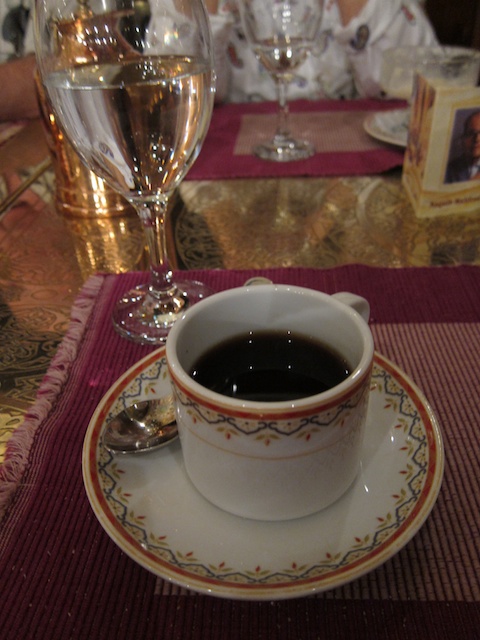