When I first arranged this tour, there was one thing missing from the itinerary that I really wanted to do. Â I wanted to go into the Great Pyramid. Â I knew that it was possible, but the tour company told me that the only way I could do it was to skip Khufu’s boat, and I didn’t want to miss that.

As it happens, there was another way I could arrange it: by staying an extra day. Â So I persuaded Julie to extend our trip one day past the scheduled tour end, something that the tour company was happy to arrange, found a couple other things worth doing to fill out the day, and was happy to know that I would get to visit Khufu’s burial chamber.

Today was that last day. Â Everyone else on the tour departed for the airport early this morning, and Julie and I had at our sole disposal the most excellent Karima, a car, and a driver.

Our last morning before departure started with me taking pictures from our balcony. Â Here’s one of my favorites: 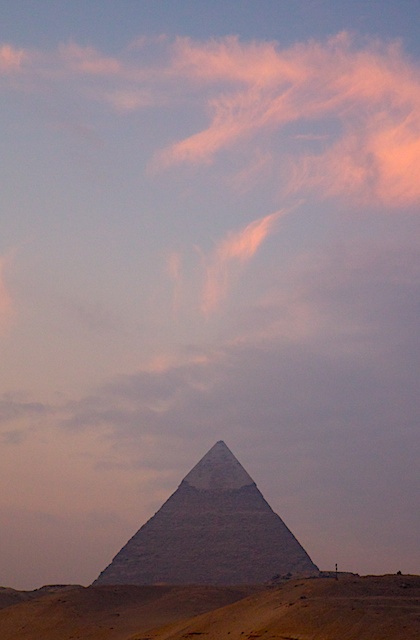 Then we were off. Â We passed through lovely fields of date palms ready for harvest. 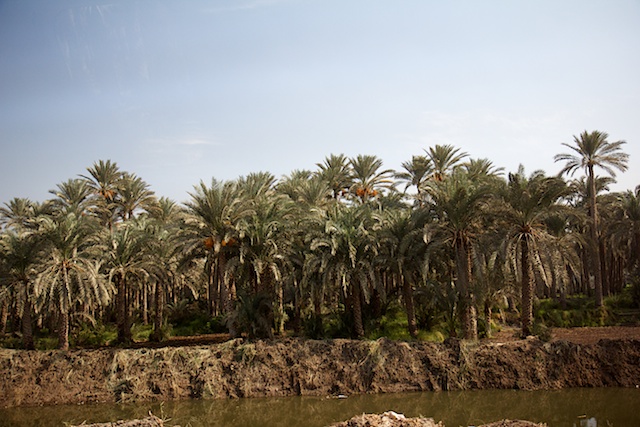 Then we reached Dahshur. Â Which means it’s time for another history lesson.

A century or so after Imhotep invented the Step Pyramid, King Snefru came to the throne. Â He too wanted something different for a tomb, so his architects came up with the idea of taking the Step Pyramid model, smoothing out the sides, and facing the whole thing with high quality limestone. Â The result was the first true pyramid, which stands now at Dahshur, about a half-hour drive from Giza. 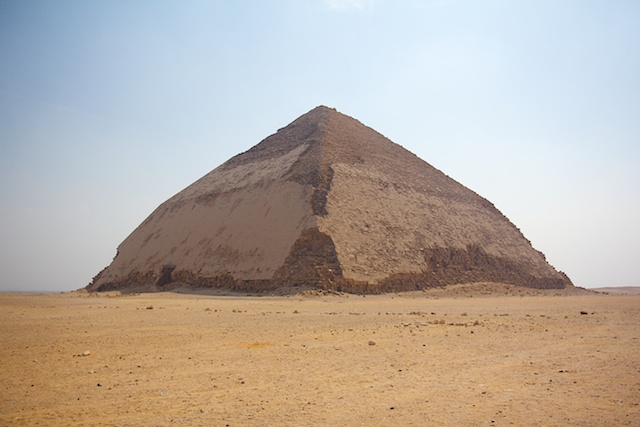 Except, you may note, there’s something wrong with that picture. Â It doesn’t have the constant slope that one expects of a pyramid. Â In fact, that pyramid looks rather bent. Â Which is why it’s now called the Bent Pyramid.

Snefru’s engineers were clearly not up to Imhotep’s standard. Â It’s believed that they started working on the pyramid and then discovered that they couldn’t continue at the same slope, so they had to change the angle. Â Leaving Snefru with a substandard tomb. Â  Chalk it up as one of the perils of being an early adopter.

Imagine having to be the guy who comes to the king to tell him of the mistake that was made. Â It’s a good thing that Snefru was, according to legend, an awfully pleasant king, because telling something like that to Rameses would probably have involved some serious head bashing.

But even a nice king has limits. Â So Snefru ordered up another pyramid built, call it Pyramid 2.0, the Red Pyramid, so-called because it’s made of a reddish granite. Â It’s not far from the Bent Pyramid. 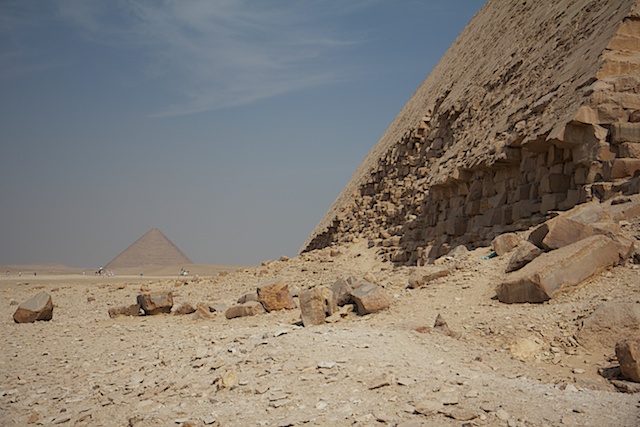 This is actually the second-tallest pyramid in Egypt, after the Great Pyramid. Â Finally, the builders had produced an ideal pyramid. Â It only remained for Snefru’s son, Khufu, to perfect the design with the Great Pyramid, or what I think of as version 3.0.

Our visit to Dahshur was marvelous. Â Unlike Giza, there’s precious few tourists, and no vendors at all. Â Which made our walk around the Bent Pyramid rather like it must have been back in the day: a walk in the desert, all alone, with only pyramids for company.

It was interesting to see the differences between these pyramids and the Great Pyramid. Â The most obvious difference is the angle. Â But the Bent Pyramid also retains more of its smooth limestone facing than any other pyramid. Â Which means that most of it has a smooth surface. 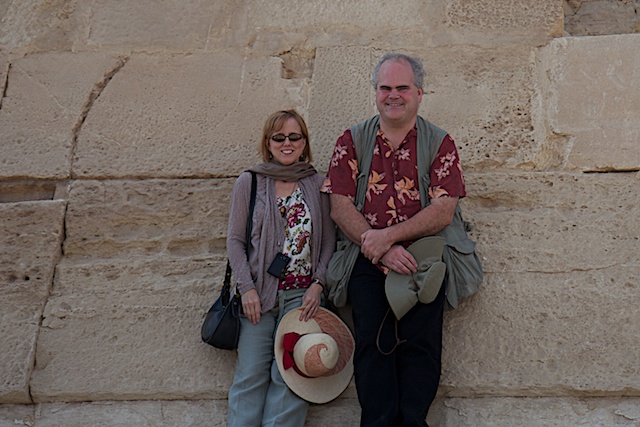 Further, the Bent Pyramid was made out of smaller stones, something that’s obvious in the areas that have lost their facing. 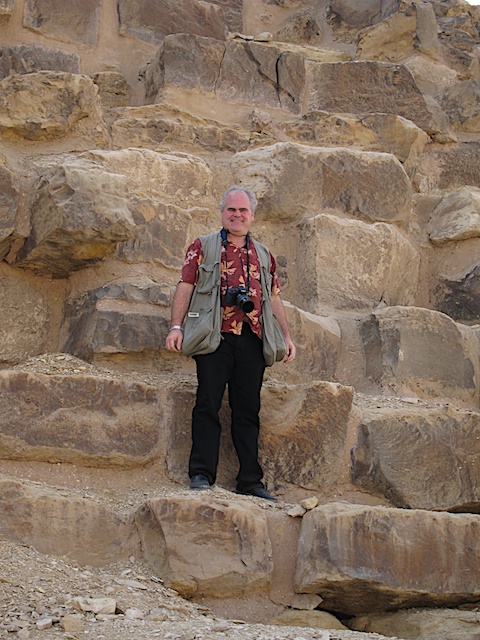 It was a rather windy day, though, as Julie discovered when her hat blew away. 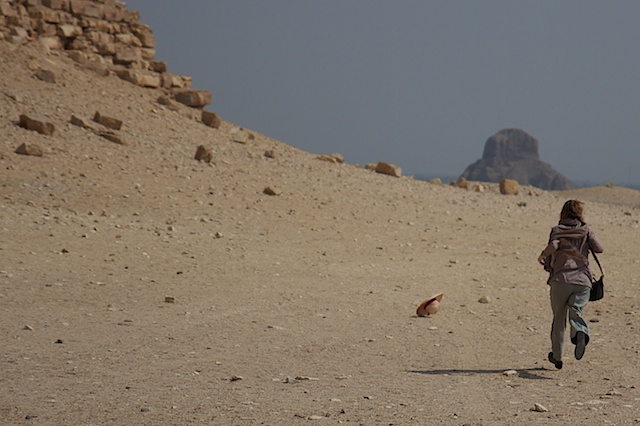 (That strange looking structure in the distance is another of the decayed mud-brick pyramids built by later generations.)

I’m happy to report that Julie caught her hat in time to have a pleasant conversation with Karima. 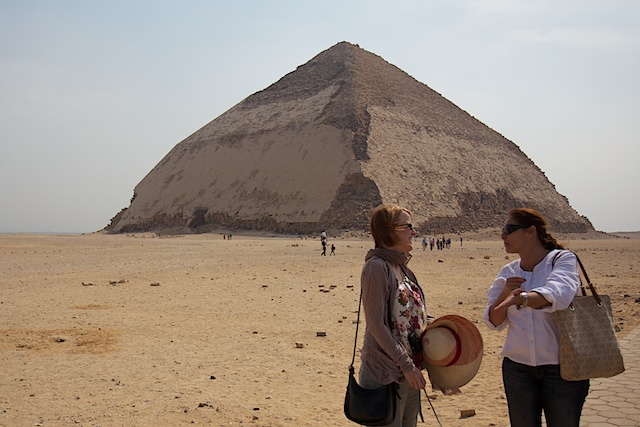 After that, we drove to the Red Pyramid where we had an opportunity to enter the burial chamber. Â This required going down a 200-foot-long steeply angled corridor that was around four foot high, something that I found a bit challenging. 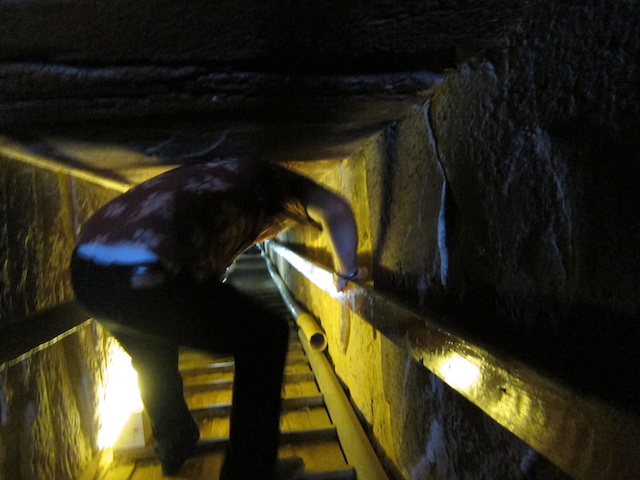 (Great, now there’s a picture of my underwear on the Internet. Â Oh well, I suppose that hardly makes me unique.)

Down at the bottom, there’s a series of rooms joined by short corridors. Â And by short, I refer to both height and distance. 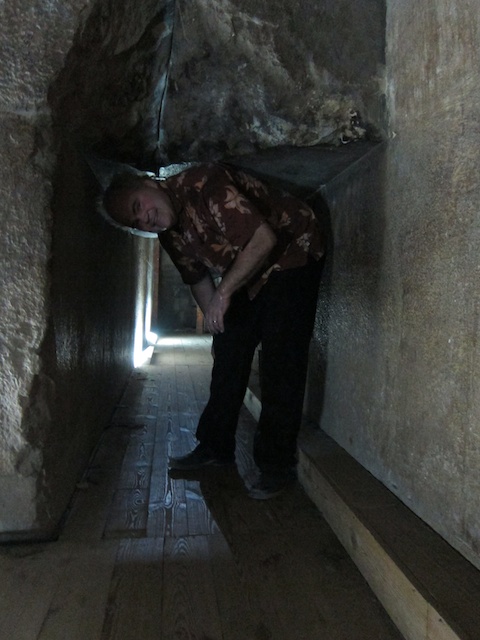 Then you get to the burial chamber, which I’m happy to report has a much higher ceiling. 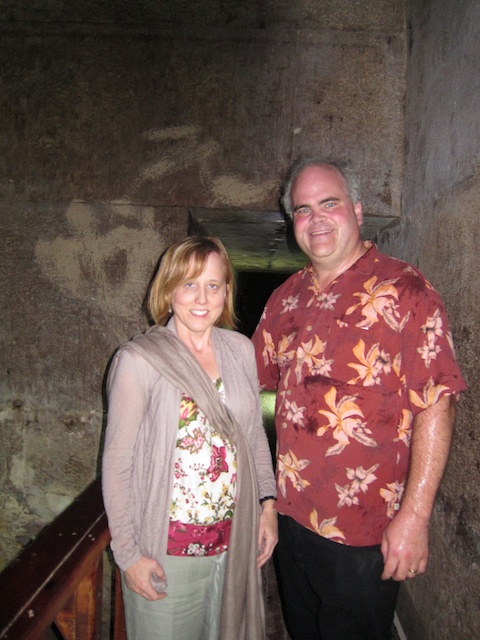 So I got to go into a pyramid after all!

After Dahshour, we visited a papyrus factory to see how papyrus is made and make a few purchases. Â Then it was an excellent lunch, and then we went back to the Egyptian Museum and saw many of the things we missed yesterday, a visit improved by the small afternoon crowds.

Here’s a picture of the outside of the museum that shows where ancient and modern history almost collided in a disastrous way: 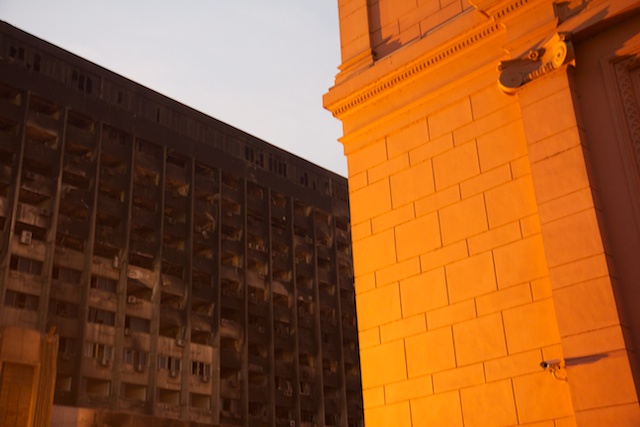 The building in the foreground is the Egyptian Museum. Â The burnt-out building in the backgrounds is the former headquarters of the National Democratic Party, or NDP, Mubarak’s political party. Â During the revolution, police snipers were firing on the crowd from the upper stories of the NDP building. Â So the revolutionaries lit it on fire. Â Happily, the fire did not spread to the Egyptian Museum, which stands next door.

After that, we headed back to the Giza Pyramids for a light show. Â The Pyramids look good under the light, even though the lasers can have a distinctly cheesy effect. 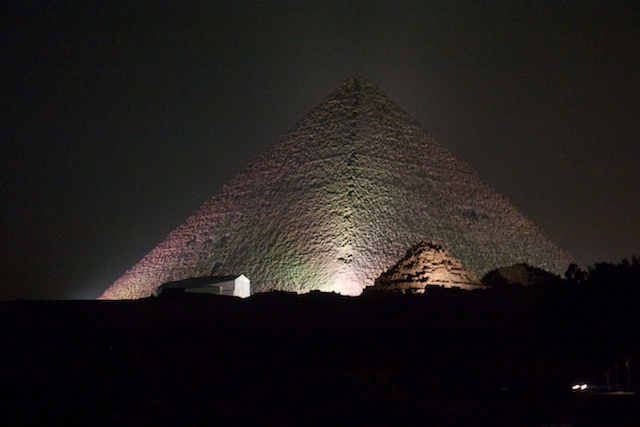 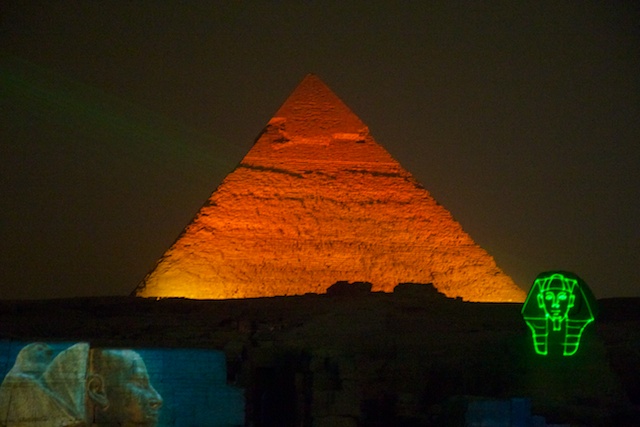 The green pharaoh’s face is projected onto the Sphinx, by the way.

And so ended our last day in Egypt. Â This has been an amazing trip. Â Look here in a few days for a series of wrap-up posts, posts that shall be written back in cooler, wetter Virginia.

One Response to Egypt: our last day