Shockingly, it’s been three years since Julie and I went on our last big trip, our voyage to Egypt. Further, a year and a half ago, Andy went to Italy. A year ago, Kate and Diana went to Italy. It’s getting so that Julie and I are left out of the family conversation. All of which is to say, going to Italy has become a necessity.

SoÂ here we are now. After a day of many transit delays, we are here. Â (Yes, many transit delays. Â Late planes, missed connections, screaming babies on red-eyes. Â All the joys of modern travel, with the only consolation being that a hundred years ago it would have taken a week-long ocean voyage to get to Europe,Â not an annoying day of airport roulette.)

In any event, we had a nice afternoon wandering around Rome near our hotel. Though all in all, some of the things we saw were a bit disappointing. For example: 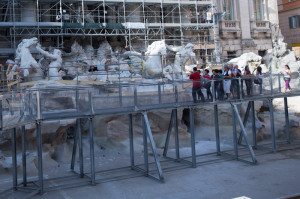 The Trevi Fountain is a lot less impressive when there’s no water in it. 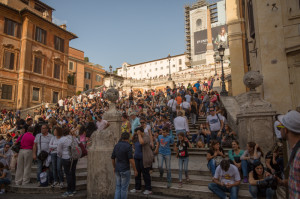 The Spanish Steps lose some of their romance when there’s several hundred people sitting on them. 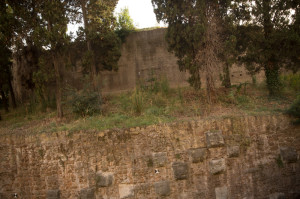 Augustus’s Tomb is a pile of dirt with some trees growing around it.

But Rome does have its consolations, chief of which is that everywhere you look, there’s:

– An amazing statue in front of a old church: 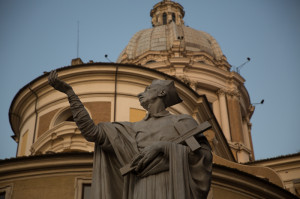 – A relic of the Roman days (in this case, Marcus Aurelius’s column):

– A cool fountain, many of them with actual water: 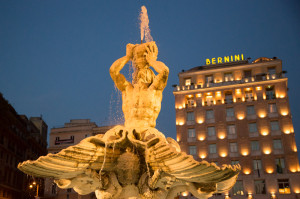 – A beautifulÂ woman standing in front of a bunch of latin inscriptions: 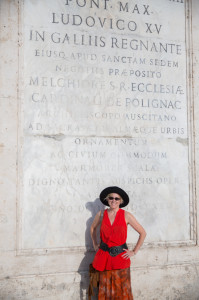 Though I have to admit, the thing that I find most entertaining in Rome (other than the beautifulÂ woman, anyway) is the way they incorporate their ancient history into their day-to-day existence. Â For example, this is what a drain cover looks like in Rome: 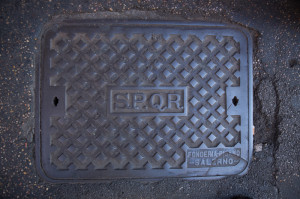 And this is the city’s Logo on the side of police cars: 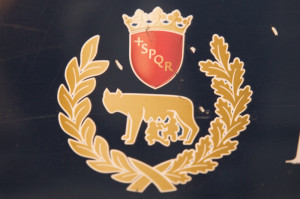 (For those not up on their Roman history, that’s the she-wolf suckling Romulus and Remus, a key detail in Â Rome’s founding myth.)

And of course, there’s gelato. Â Lots and lots of gelato, sold on every corner.

So all in all, it’s a good place to visit. Â And we’re just getting started.