Imagine that you wake up one fine morning and head downtown for a couple of meetings. Â After a full morning, you’re just finishing lunch when you look past city hall and notice something strange. Is that mountain really supposed to be exploding? 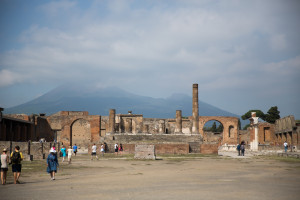 That’s what happened at 1:00 PM on August 24, 79 AD, in the little city of Pompeii. I’m happy to report that it didn’t happen today:Â the smoke over Vesuvius in the background is only a low-hanging cloud. Phew.

A fascinating day, full of fascinating ruins, lovely preserved art, and a constantÂ weird feeling of what it must have been like on that August day so long ago. 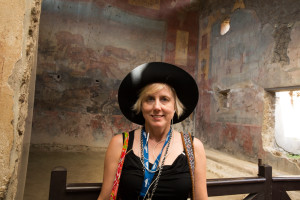 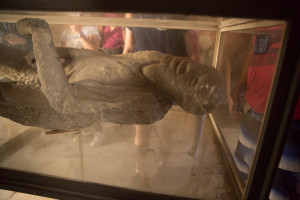 We not only visited Pompeii, we climbed Mt Vesuvius itself. Here’s the crater, which is bound to erupt again one of these days. 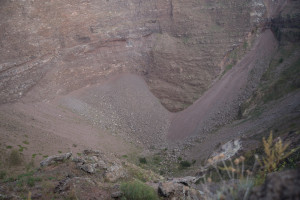 And lest you doubt that it’s still live, here’s some steam rising from partÂ of the crater: 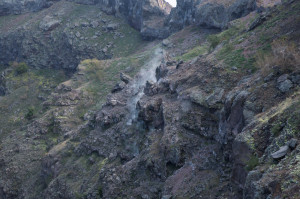 Note that there are several hundred thousand people living in the red zone. Â When – and that’s when, not if – Vesuvius goes up again, it’s going to kill a lot more people than it did back in 79.

Any trip with Julie is going to involve the occasional Art Attack. Â This time, she’s got a strange little book that gives her little assignments. Â One was to stomp some dirt onto a page. Â She of course chose volcanic dirt. 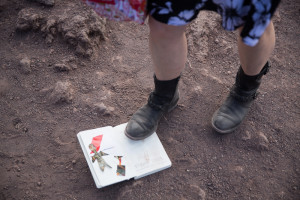 But that wasn’t the only art up on the mountain. Â On the road to the drop-off point, before the last steep hike up to the crater, there’s several oddÂ and lovely things Â made of volcanic rock. 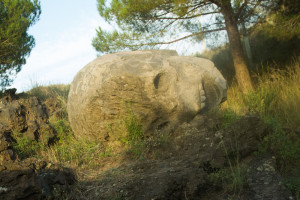 And special bonus for the day, with a special call-out to my WWII-history-geek friends: on the way to Pompeii from Rome, the bus made a bio-stop in sight of a little monastery named Monte Cassino. Yes, that Monte Cassino. (Clearly, they have rebuilt it since 1944.) 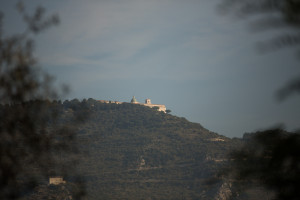 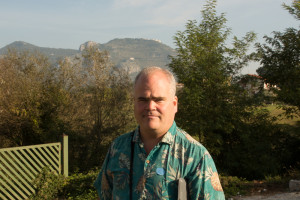