Today we visited the ancient part of the city. Â I loved it. 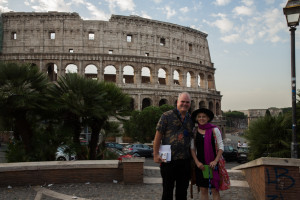 But I can’t denyÂ the thrill I felt when I stepped onto the ground floor of the stadium and looked up at all the people milling about in the seats above me. 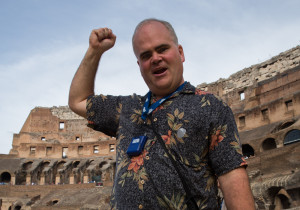 While I liked the Colosseum, I found the Imperial Roman city much more evocative.Â  After much study of the history of Rome, I found it thrilling to be walking where Augustus walked, talking where Marc Antony gave Caesar’s funeral oration, standing in Domitian’s bedroom, walking down the Sacred Way where all those triumphs passed. Â There was magic to it.

One of the things that helped us imagine the scene was a lovely little book that Julie bought. Â It’s called “Rome: Past and Present,” and it shows views of Roman sites as they appear now and as they appeared then. Â Here Julie holds up a view of what the Roman forum looked like then against how it looks now. Â I strongly recommend this book if you ever find yourself visiting any of the sites of ancient Rome. 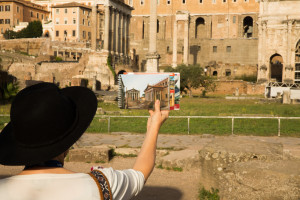 Here she is, again looking at the book while standing next to the site of the Circus Maximus, the stadium where the chariot races took place (and note: chariot racing was more popular in Rome than the gladiatorial games): 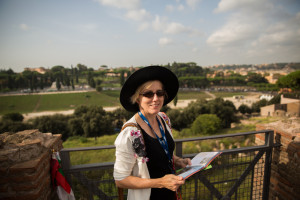 And one last note, before we move on from the Imperial City: throughout Rome, there are open running water flows set up to allow for easy filling of water bottles. Â Here’s one with a wolf’s head that’s across the street from the Colosseum: 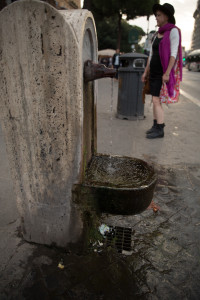 I’ve seen similar things in other places, but generally not run by the city. Â And not with constantly flowing water – something that would be a no-no in a water-poor city. Â But this does hearken back to an older Rome, back when all those lovely fountains served the purpose of providing water for the people of the city.

Later in the day, we took a tour that promised to be nicely gruesome. Â A visit to the Capuchin Monastery that is decorated with various tableaux made of the skeletons of past monks. Â It was about as gruesome as one would wish, though also contemplative (the monks apparently did this with the idea of giving a graphic demonstration of the fragility and impermanence of life). Â Alas, no photos were allowed, so I will have to leave you imagining what a chandelier made of human bones looks like.

No photos were allowed in the Catacombs either, another stop on the tour. Â There were no actual human remains on display either, though many more philosophical musings on mortality.

And finally, we visited San Clemente Â Basilica. Â A lovely church that contains areas built in the 14th, 4th, and 1st centuries, the last one being a pre-Christian temple to Mithras. Â No photos allowed here either, which means that the last half of the day was a complete shutout where photography was concerned.