We’re on our last full day in Rome. Â Our stay has been marvelous. Â There’s been three themes:

Today included all of these.

First, the art. Â We spent the morning in the Galleria Borghese where one can see the palace and art collection of a 17th century cardinal. Â Cardinal Borghese used money, power, threats, and extortion to put together an astonishing art collection. Â While it’s not the largest art museum out there, piece for piece it’s one of the best collections I’ve seen, right up there with the Louvre. Â Among many other things, it has major paintings by Caravaggio and sculpture by Bernini, two guys who are quickly climbing to the top of my list of favorite artists. Â Here’s a couple of poorly photographed examples: 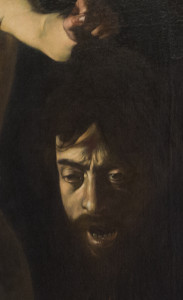 This is a detail of a Caravaggio painting of David holding the head of the slainÂ Goliath. Â The key thing to note is that Goliath is a self-portrait of Caravaggio, painted as an expression of guilt over a man he had killed in a duel. Â Caravaggio hoped to get a pardon as a result and be able to return to his home in Rome. Â He got the pardon, but alas died before he got back.

Here’s a Bernini sculpture of Apollo and Daphne. Â Apollo is on the verge of capturing Daphne when Daphne’s father, a river god, turns her into a tree to protect her fromÂ Apollo. 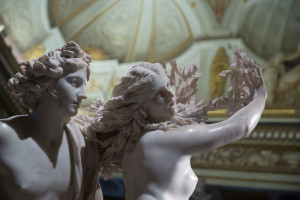 This sculpture has to be seen to be believed. Â Daphne is transforming into the tree even as Apollo is grabbing her. Â Her toes are taking root, her skin is turning to bark, and her fingers are sprouting leaves. Â It’s hard to believe that this can be done in marble.

Cardinal Borghese was patron to both Bernini and Caravaggio. Â The man clearly had taste.

After a quick lunch: 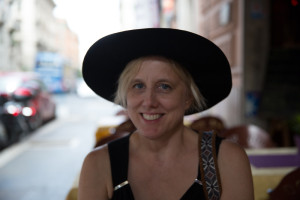 we headed off to the Capitoline Museum, a collection that combines art and history. Â Here, for example, is an ancient statue of the emperor Commodus: 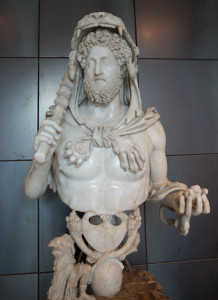 Doesn’t look at all like Joaquin Phoenix, does he?

And here’s some guy standing next to the remnant of a giant statue. Â That must have been some statue! 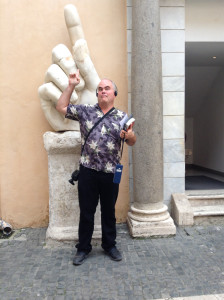 After that, we returned to the ruins of ancient Rome. Â Once again, I found being there incredibly evocative. Â Walking down the street that Cleopatra took into the city. Â Seeing the stone where Julius Caesar was cremated. Â Walking through the room where the Emperor Domitian was assassinated. Â I can’t think of a place on earth that has so much history that had such an impact on our modern world. Â Even our language comes from the names of places where I stood today (Capitoline Hill, which led to the word “capitol”; Palatine Hill, which led to “palace”). Â Rome is not where western civilization was born, but Â it is where it grew to adulthood. 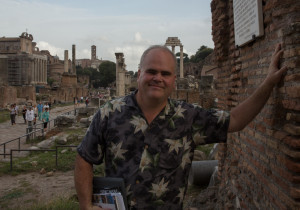 And while we’re talking about amazing things, here’s Julie, holding a piece of mosaic tile that she found on Palatine Hill. Â Roman emperors probably stepped on that little piece of stone in her hand. 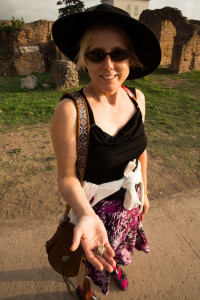 (She tossed it back. Â Taking relics from Rome is not a good thing.)