Today was a travel day. Â We moved our base of operations from Rome to Florence. Â Which limited our time in both. Â So in Rome, all we did was:

– Three churches, one of which had another three Caravaggios. Â That brings me up to, gee, I’ve lost count. Â Eight? Â Nine? Â Something like that many Caravaggios. Â Rome is full of the most beautiful churches that are incredibly well decorated and contain art by the masters. Â You can walk down the street, stop into a random church (no entrance fee!), and expect to see at least one masterpiece inside.

– One dead rat. Â I’ll spare you the photo I took.

One other observation about Rome, before I move on:

The original Romans wereÂ some of the best looters in history. Â One of the places they looted was Egypt, taking away many obelisks that they used to decorate their various public spaces. Â At some point over the years, Rome’s later masters moved those obelisks all around the city. Â So in addition to running into random beautiful churches on any corner, you’re likely to find a random obelisk pop up where you least expect it.

But there’s one weird thing about all those obelisks. Â Here’s the base of one:

Note the guy on the bottom left, the one with a hawk head. Â That’s Horus, an Egyptian god. Â In fact, the carvings on the obelisk are all Egyptian religious writing.

But at the top of the obelisk, you find this: 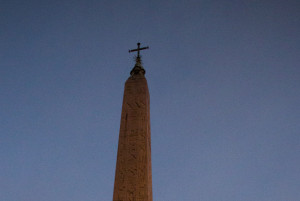 Those crazy Christian Romans didn’t even bother removing the pagan religious symbols. They just slapped a cross on top and figured it was now a Christian monument.

You can see this on a lot of the old Roman and Egyptian monuments throughout the city, though the symbols on top are not always crosses. Â Sometimes they are statues of saints. Â It’s an interesting approach to recycling.

After an education in the Italian train system, an education that only cost us an hour’s delay and a bit of stress, we find ourselves in Florence. Â We enjoyed a rooftop snack in view of the Duomo. 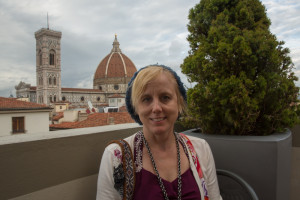 Then after a quick meal, we took an evening tour that told stories of various bloody doings in Florence.

My impression so far: Florence is an amazing place, where you see designer shops set in medieval towers. 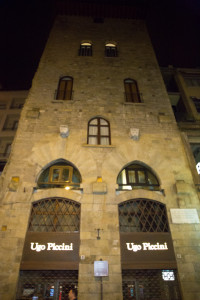 The Duomo is so beautiful and unusual that sometimes while looking at it I find it hard to believe it’s not just a model. 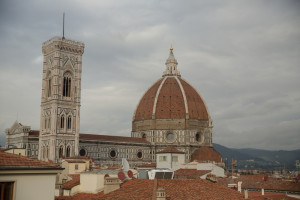 And there’s all sorts of lovely views at night. 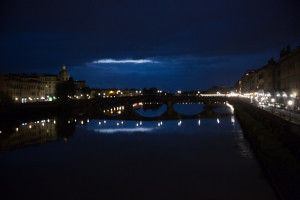 But I am discovering to my chagrin that I did not do enough homework for this trip. Â While I read a survey on Italian history, I did not study the history of Florence in detail the way I did Rome. Â I did not memorize the Medicis in the way I memorized the Roman emperors. Â (Yeah, I actually did that. Â I’m a geek, I admit it.)

The result is that I’m failing horribly at serving as Julie’s guide. Â Further, the place doesn’t have the same buzz for me as Rome, given that I am not steeped in its history. Â I shall have to find a way to spend time over the next few days poring through Wikipedia. Â What’s worse is that we’re headed to Venice in a few days and I didn’t study up on it either. Â Sigh – better get cracking, Joe!