First it was a tour of the Doge’s palace. Lots more art, some pretty impressive rooms, and an arsenal full of various deadly toys, including this pretty little cannon. 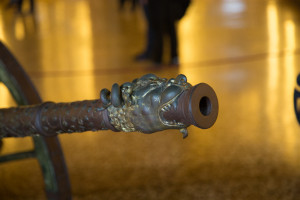 Here I am in one of the many huge meeting rooms in the palace, which served both as the home of the Doge and the meeting place for the various legislative bodies. (Venice was a republic, complete with a Senate, with the Doge being an elected official who functionedÂ more as aÂ president-for-life with limited powers than as a king.) 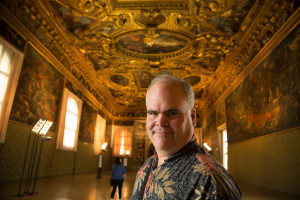 And here was a bit from the map room. Note that “Terre Incognite d’anthropofagi” means “Unknown land of the cannibals.” Isn’t Latin fun? 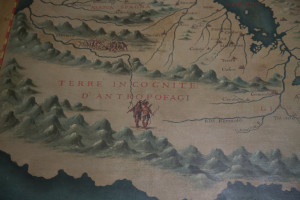 After that, we wandered around the city, including a visit to the Galleria d’Accademia, the museum of Venetian art. Here’s a saint who had a particularly bad end, though having a hatchet in his head doesn’t seem to have slowed him down any. 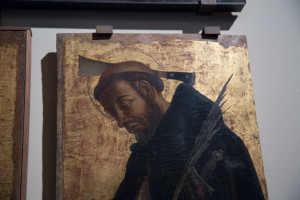 Then a stop on the Rialto Bridge. 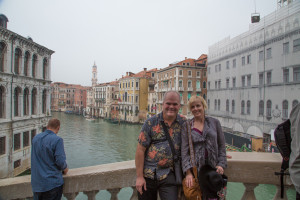 And that evening, a nighttime tour of Venice, complete with Gondola ride. 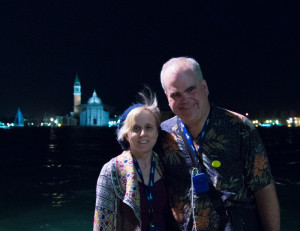 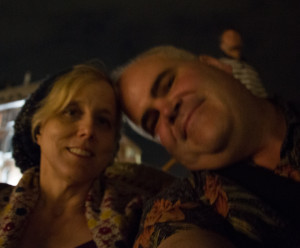 Finally, on the way back to our hotel, we stopped by one of the three open-air restaurants withÂ live music on San Marco Square and we had a couple drinks. 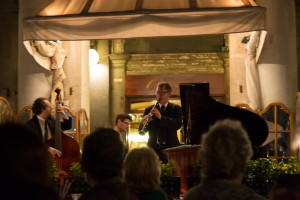 They tell us that Venice has a population of 60,000, and any given day it has 200,000 tourists. Â In some ways, they say, it’s turning into a giant theme park. Â There’s something sad about that. Â But on the other hand, every now and then it’s nice to visit a theme park, and we certainly enjoyed our day in Venice-land.