For various reasons, work slowed down drastically in the fall. Â I took the opportunity of going on several short trips.

The first of these was a road trip to Civil War sites in Tennessee. Â I’ve wanted to try a road trip sometime, and this seemed an opportune moment. Â So I hopped in the car, crossed the border, and visited the state that had the second-most number of Civil War battles (first, of course, being Virginia).

(As it happened, I had business at the beach right before the trip. Â So I drove all across Virginia at its widest point, from coast to mountains, to get to Â Tennessee. Â Coming home, I came from the southern border of Virginia to Northern Virginia. Â So I literally crisscrossed Virginia on this trip.)

My first stop was pre-Civil War: I saw a sign from the highway for the Hermitage, Andrew Jackson’s home, so I stopped and visited. Â Fairly standard early-19th century estate, nothing much to distinguish it. Â But I did find myself getting really angry at Jackson, who was a pretty lousy human being and, as president, was a key figure in some of America’s most shameful actions (launching the Trail of Tears, for example).

Second stop: Fort Donelson, the site of Grant’s first big victory, in the northwest corner of Tennessee. Â A beautiful place, where the Confederates set up a fort overlooking the Â Cumberland River. Â Here’s a battery of cannon overlooking the river: 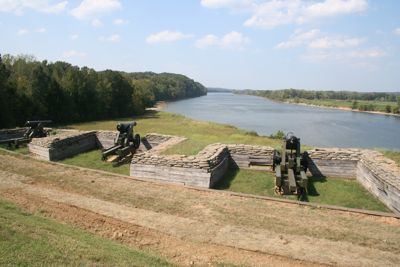 Imagine gunboats coming up the river and these cannon firing on them. Â Which is pretty much what happened on one cold day in February, 1862.

After the fort, it was back to the road, where I saw this lovely billboard: 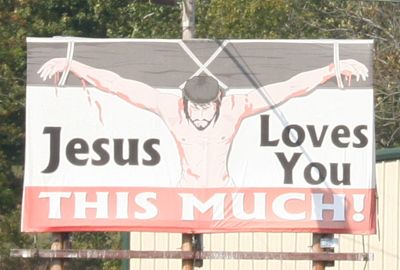 Then it was back to Nashville, (in north-central Tennessee) where I spent an evening watching the Grand Ole Opry. Â I’ve often seen the Lil Ole Opry down in Mathews, and I thought this would make an interesting comparison. Â The music was a lot better in Nashville, but the audience was almost exactly the same: all older white people. Â It’s not often these days that I find myself in a crowd that makes me feel young, but this one managed it. Â And in an audience of around a thousand people, I saw one African-American. Â (And yes, I did look.) 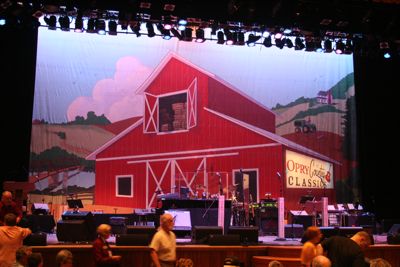 Next, off to Shiloh in south-west Tennessee, the first truly bloody Civil War battle. Â A nice battlefield where I learned many things that I did not know about the battle – walking the field adds so much to reading the stories. Â Plus a special bonus: it turns out that the Shiloh battlefield was, back around 1400 or so, the site of one of the biggest cities of the Mound Builder Indians, a civilization that thrived along the Mississippi valley but which was wiped out by European diseases well before actual Europeans got anywhere close. Â Here’s one of the large mounds built by those people: 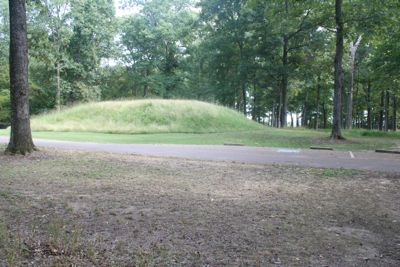 And another lovely view of a river, this time the Tennessee (the Civil War in the west was all about the rivers): 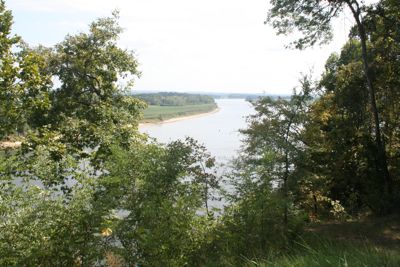 Then I drove the Chattanooga in southeast Tennessee, site of another two Civil War battlefields. Â Chickamauga was interesting, but far better was the view of the siege of Chattanooga, where the Confederates besieged Union forces until Grant showed up and drove them off.

By far the best part of the battlefields was the view from Lookout Mountain, a 2300 foot mountain overlooking the city of Chattanooga. Â On the top of the mountain, there’s a tourist trap called the Battlefields of Chattanooga which has a model of the city showing the various military actions involved in lifting the siege. Â Then you step outside to a national park and voila, you can see the entire area where all that fighting took place. Â Here’s the view: 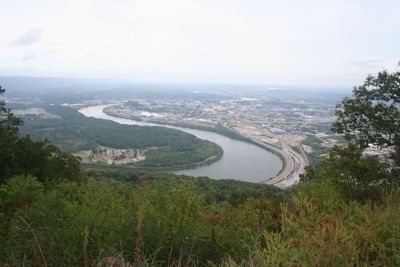 I hit another tourist trap or two (Underground waterfall! Â World’s steepest railroad!), then after a stop in Raleigh where I had some great sushi with Kate, it was back home again. Â Zigzagging across Tennessee, then cris-crossing Virginia, and my roadtrip was done.