Where right is never right

In America, we know that right is right and ever shall be.

Sadly, other countries haven’t achieved the same realization. Â Even some of our best friends in the world, places like England, haven’t discovered this simple truth. Â They persist in following a wrong course, even though they have our sterling example set before them. Â They will only accept that right is right if there is no other option. Â At all other times, they refuse to recognize that right is right.

I refer, of course, to the proper side of the road for driving.

But every now and then a man has an itch to put aside the right and drive on the left side of the road. Â They tend to frown on that sort of thing when you’re driving the Beltway, so today I took the opportunity to take a turn to the left. Â And so we rented a car and drove to Windsor Castle, a place where I’ve wanted to visit since Julie and I came to England in 2003.

Windsor didn’t disappoint. Â It’s a magnificent castle – absolutely huge, with plenty of medieval defenses and a lovely chapel – practically a cathedral – that featured the graves of a number of people that excited me. Â I got a chance to stomp on the burials of Charles I and Henry VIII, two kings that I particularly despise. Â (I take my history seriously!) Â And I got to pay my respects to several of whom I think better, including George V and VI and Henry VI. Â Here I am with guidebook in hand and the Round Tower in the background.

The living quarters at Windsor are also quite nice. Â When Julie and I visited England last, we visited a number of palaces and occupied castles. Â With the exception of Brighton Pavilion, which is a delightful place, they tended to feel awfully stodgy. Â But we rather liked Windsor, even if there are an awful lot of portraits of Charles I hanging there. Â (Then again, Julie rather likes Charles. Â One of my complaints about the man is that he was a profligate spender, leaving England bankrupt. Â But one of the ways he spent all that money was by patronizing artists, something of which Julie approves. Â And something that tends to leave you with lots of portraits of yourself.)

Meanwhile, Kate got a chance to join the guard. Â Here she is, learning how to march. 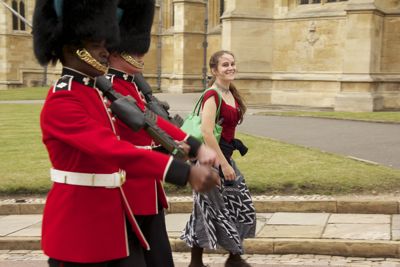 Wipe that smile off your face, Private Kate! Â You’ll never make it that way!

In the evening, Julie, Kate, Diana, and I went to see “The 39 Steps.” Â This is a comic version of the classic Hitchcock movie, performed by a manic cast of four. Â Diana did a project on it in a stage management class and wanted to see it. Â It was a fun show, but not amazing.

Meanwhile, Andy decided he wanted a day by himself in London. Â I’m not sure what he did all day, but I suppose I’ll find out tomorrow.

And a last note about the weather. Â It’s been terrible.Â Â Every day it’s rained at least some. Â In fact, we never know when we go into a building whether it will be raining or clear when we get out. Â We’ve taken to carrying umbrellas everywhere, and picking up new umbrellas to replace damaged ones. Â Here’s a typical view from our touring. 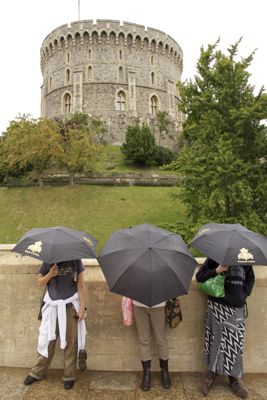