We finally got out of Texas. Â We’re now homeward bound. Â But because just heading home isn’t enough fun, we’ve got more stops to go.

When I first planned this trip and mapped out how to drive to San Antonio, my various mapping programs offered two main routes. Â The first was go west from Virginia, then south to Texas. Â The second was go south from Virginia, then west to Texas. Â We decided to take both routes in succession, doing the loop counter-clockwise.

That southern loop happens to pass through New Orleans. Â So we stopped on Tuesday at New Orleans and spent the day there Wednesday.

So what did we do?

– Went for a walk on Bourbon Street upon arrival Tuesday evening. Â Tons of bars, tons of strip joints, tons of live music, tons of tourists enjoying all of the above. Â Not really our scene, but fun to see nevertheless.

– Spent Wednesday morning at the New Orleans Museum of Art. Â A surprisingly nice collection – we enjoyed it quite a bit.

– Took a bus tour of New Orleans. Â Enjoyable, though it included harrowing descriptions of Katrina, a bit too recent to be fun. Â I did enjoy seeing a bunch of places from the show Treme, of which I am a fan.

On the tour, we stopped at one of the New Orleans cemeteries, where they use above-the-ground tombs like this. 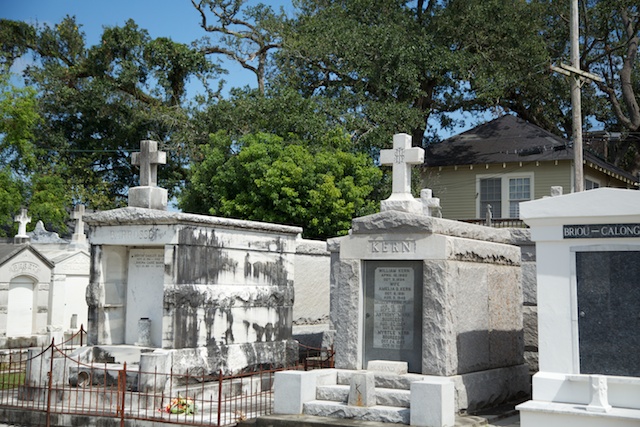 Seeing one that was unoccupied, I decided to try it on for size. 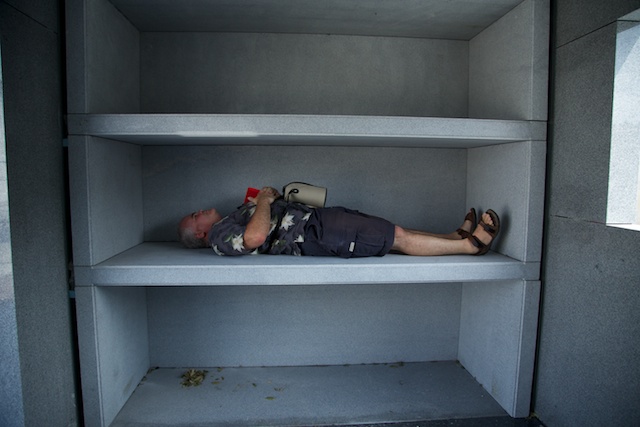 – Did a little shopping on Royal Street. Â Bought hats.

– Took a mule-drawn tour through New Orleans. Â Our guide was superb – he’d tell some outlandish story about a culinary concoction invented at some restaurant that we were passing and turn back to us and shout: “Are you hungry yet?” Â Then he’d pull up by some shop or bar and the proprietor would come out, tell us what a great guy the guide is, and make some snide and very funny comment about him. Â Here he is with Julie. 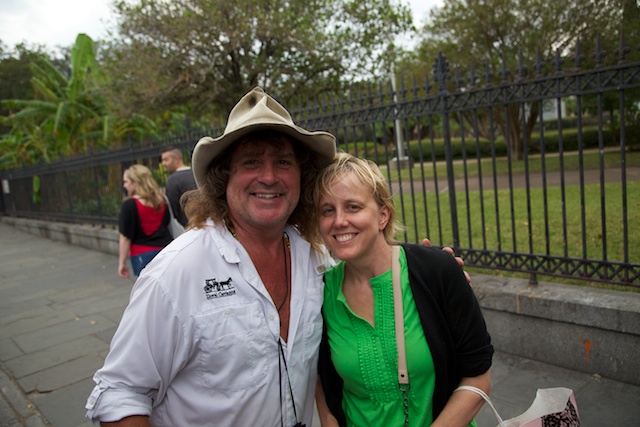 – Had an absolutely superb meal at Nola. Â Highly recommended. Â Would be the best meal by far of this trip if the dinner at Bohanan’s in San Antonio hadn’t also been so amazing. Â The two were the best meals I’ve had in some time, though.

– Wandered Bourbon Street again. Â Stopped by a jazz bar and listened to a set that included a bunch of my father’s old dixieland favorites.

All in all, a terrific day in the Big Easy. Â Julie and I agree that New Orleans would be worth another trip sometime, well worth spending more than just one day.

One Response to New Orleans