A painting to inspire passion

It is always interesting to see how different artists depict the same story. Â And artists love telling the same mythic stories. Â This week, I’ve seen at least a dozen versions of the Rape of the Sabine Women, several Davids in various stages of fighting Goliath, and any number of versions of any number of events in the life of Jesus.

One story that I’ve frequently seen is the tale of Judith and Holofernes.

In the Biblical story (well, Biblical if you are Catholic: not all protestants count the Book of Judith as part of the Bible), Holofernes is the general of an enemy of the Israelites. Â Judith, a heroine of Israel, manages to seduce him, get him drunk, and cut off his head.

There’s many artistic depictions of this. Â Here’s one that we saw today at the Uffizi: 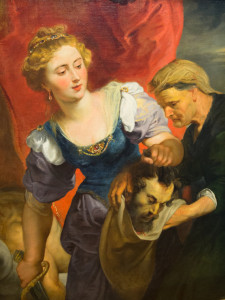 We were walking through the gallery and came across this very different version: 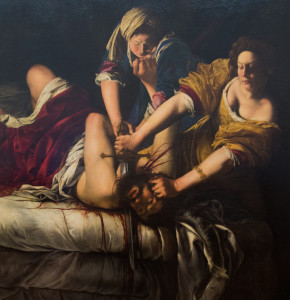 You can practically hear the bone crunching as Judith saws through Holofernes’s neck in this one.

Julie mentioned that this was her favorite painting of the story, when two women who were walking by joined in on the conversation. Â From all of these eager fans of this painting, I learned the following:

– This was painted by a 17th century woman artist.

– She had previously been raped.

– It’s thought that she painted Holofernes to resemble her rapist.

There is something rather satisfying about seeing an artist take some measure of revenge in this way, even if it is not all the justice she deserved. Â And it’s also nice to see works by a woman artist of that period, something that was rare.

And as Julie says, this is far from the sanitized view of the Judith story that most male artists present. Â This Judith is powerful and not at all squeamish about the work she must do, and the work itself is an act of butchery, not at all delicate.

But it was also interesting to see these three women, Julie and the other two, so enthusiastic about the history of this painting. 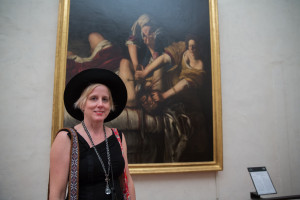 And a special bonus travel note: several of the great art museums of the world, museums that gather huge crowds, will stay open late one or more nights a week. Â If you go there on those evenings, the crowds are much smaller. Â You can see the famous paintings without having to elbow your way to the front. Â We used this trick at the Louvre a few years back to see the Mona Lisa without being mobbed. Â It worked just as well today at the Uffizi: we did an earlier tour, but then stayed until closing. Â There were huge mobs around the most famousÂ paintings earlier in the day, but at night we practically had Venus and the othersÂ all to ourselves.