Ever since I’ve heard of them, I’ve found the native American cliff-dwellings fascinating. Â So while Julie did her class today, I visited one – the Puye Cliff Dwellings. Â They did not disappoint.

They are less than an hour from Santa Fe. Â But the drive, which goes through several Indian reservations, is remote and beautiful. Â The last six miles go across empty scrublands. Â At the end, you find the cliffs.

To do the tour, you climb up steep staircases, ladders, and even steeper rock stairs. 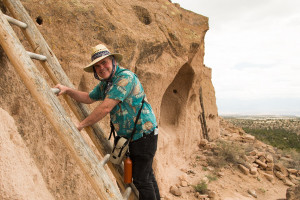 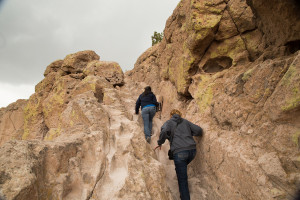 The view from the cliffs is spectacular. 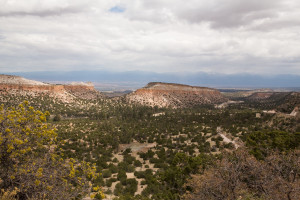 The dwellingsÂ a long line of caves that once had structures built out of them. 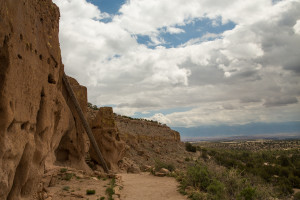 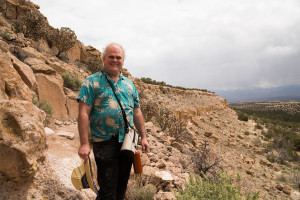 At the top of the mesa, we were met with a rain and hail squall that did nothing to dampen my spirits.

There were several adobe buildings. 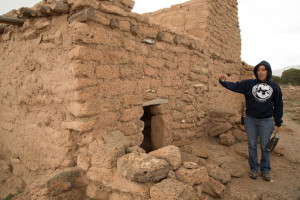 There was aÂ kiva, an Indian holy place. Â It’s a chamber dug into the ground with a roof that you enter through a ladder. Â The Pueblo Indians used an underground chamber because they believed people emerged from the earth. Â So when you emerge from under the earth to the surface, it is like being reborn.

We entered the kiva, but were not allowed to take pictures. Â Here’s a photo of the outside. 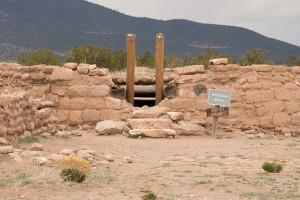 This was a marvelous trip.

I followed it up by visiting nearby Los Alamos. Â All in all, it was a bit disappointing. Â There really isn’t much there to see – one small history museum, another museum describing the science work done there for the Manhattan Project and now. Â The one thing that gave me pause was full-scale models of the Little Boy and Fat Man atom bombs used to bomb Hiroshima and Nagasaki. Â These included detailed descriptions of the design aspects of the bombs. Â Rather chilling. 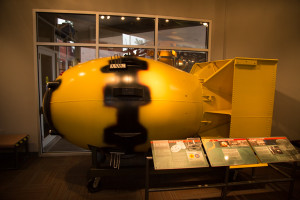 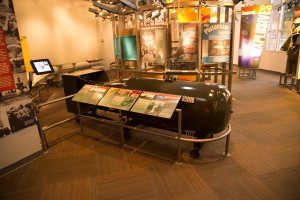 Then I picked up Julie and we took a Ghosts of Santa Fe tour. Â Much fun, though I was the skeptic of the bunch. Â But while I don’t believe in ghosts, I certainly believe in ghost stories. Â And the tour had many wonderful ones. 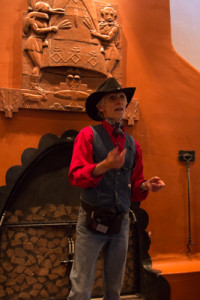