Adventure at the end of the day

The last few of times I went to the Caribbean, I made a point of going out one night with my trusty underwater flashlight and a snorkel.

The first time I did this, at the Turks and Caicos, there was a party going on at one of the resorts not far from the reef where I snorkeled.Â  As I swam along through the dark waters, the visible sea consisting only of what was illuminated by the shaft of light from my flashlight, my underwater ears could only hear the bass tones from the music playing at the party. Those base tones sounded something like this: “Da dum. Da dum. Da dum da dum da dum da dum…” Yes, I was all alone in the water at night with the theme from Jaws playing for me. It was terrifying and exhillerating, and I’ve made a point of repeating the experience at all possible opportunities.

On this trip, tonight was the night.

The down side: the visibility was terrible. (Yes, Bill – I know it was night. I mean visibility with my flashlight.) There was so much debris in the water that in places I could barely see three feet. This produced even more anxiety than you would expect, as the most prevalent life form off the resort’s beach appears to be spiny sea urchins. And I did not want to stumble into one of these ugly little bombs, so feeling my way through the murk was right out. 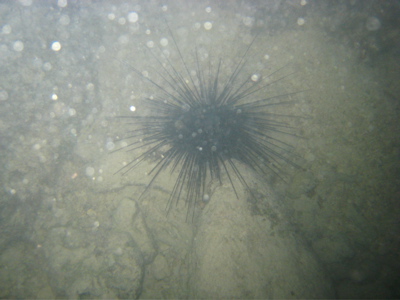 But there is a big upside to diving at night, other than the adrenaline rush. That’s the creatures that only come out after dark. Of these, my favorite is the octopus. One accommodated me tonight. 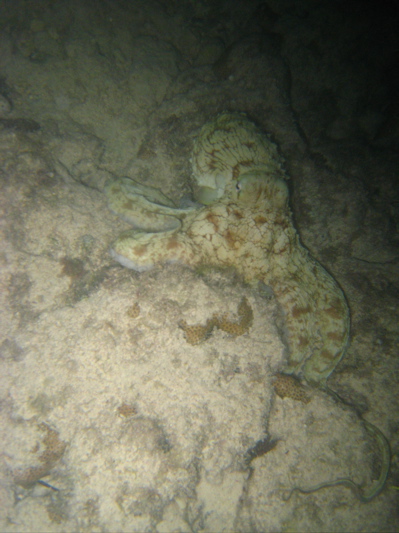 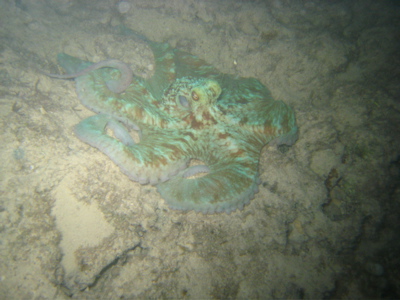 Thank you, Mister Octopus. (Or maybe Mrs Octopus, though I suppose that would only really matter to another octopus. It certainly did not matter to me!)

This entry was posted in family, travel. Bookmark the permalink.