After touring, I did a little shopping. Â (The family have all got their favorite India items, after being the beneficiary of many of my previous trips, but some are in need of replacing.) Â Let me describe what it’s like to shop on Commercial Street, one of the major centers of shopping in Bangalore.

FIrst off, you should note that Commercial Street is the place where, when Julie visited here, she threw her hands over her eyes and said, “Too much visual stimulus! Â Make it go away!” Â Sure enough, there’s vast amounts to see in all directions, all sorts of color, plenty of small shops, and a wide range of humanity.

A typical street in this area is a narrow one-lane road with small shops lining each side. Â People walk in the streets, dodging the occasional car, motorbike, or autorickshaw (these are three wheel vehicles that in stability and size resemble a golf cart. Â I love them, but Julie, that wise woman, wouldn’t get in one when she was here). Â The crowds are big, the shops are small, and the road is crowded.

But if that’s too open, if you’re feeling a sense of agoraphobia, you can always turn down one of the alleys. Â Now you’re in a much tighter space, surrounded by yet smaller shops and stalls, and with even more difficulty dodging the cars.

Still, though, things seem rather open. Â Now it’s time to go down the alley-off-the-alley. Â This is about five feet across, there’s no more cars or autorickshaws, and the motorbikes tend to be being pushed. Â But there’s still plenty of small stalls and even a few shops.

Finally, you come out and see the following mixed among the traffic: 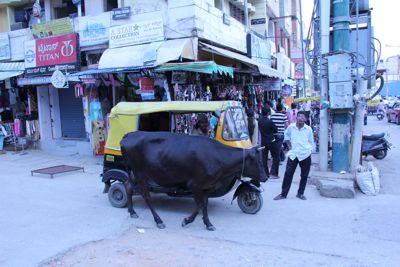 Shopping in a shop can be fun too. Â They believe in lots of service here. Â Visiting one of my favorite shops, Mysore Saree, to pick up some silk (yes, Diana, I got your silk) involved sitting down on a stool at a small table, having the sales staff bring me a drink, and having other salesclerks running this way and that finding bolts of cloth that match my descriptions of what I need. Â And match their ideas of what else I might be persuaded to buy. Â Finally, when I’ve picked out all of my cloth, they say, “Would you like some pashminas?” Â What do you know, those are on my shopping list too, so I say yes. Â And they bring forth the nicest ones I’ve seen all day (and I’ve been looking), and I pick out several in different colors for my womenfolk to divide however they so choose. Â (Yes, Julie, Kate, and Diana – I’ve got your pashminas.)

(Don’t worry, Andy, I found your wooden snake. Â Though I think you would have best enjoyed the Bangalore shopping experience, with your taste for bizarre bazaars. Â You probably would even have bought food from the street vendors, a little too daring for me!) 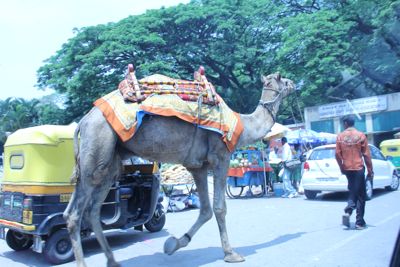 This was the first time I’ve seen a camel in Bangalore. Â I’ve seen them in other parts of India – even rode one once. Â But never before here.