When I first read the itinerary of this tour, there were a few key items. Â The Pyramids! Â Karnak! Â Valley of the Kings! Â All that neat King Tut stuff!

Then there were the lesser items. Â All those temples from the Greek era. Â Edfu. Â Philae. Â How boring. Â I mean, those things aren’t even 3000 years old – how interesting can they be? Â (Yeah, I know. Â At home, a 200-year-old house gets a big fancy plaque. Â Here I’m not impressed by ten times that long. Â But you know, this is a really old place.)

But it turns out that a two thousand year old temple can be pretty neat. Â And two of them in one day is double the fun!

First stop, the Philiae Temple. Â This is a temple to Isis that is in an island near Aswan. Â An island, of course, means a boat ride. Â And so on the river we go, on a boat much like this: 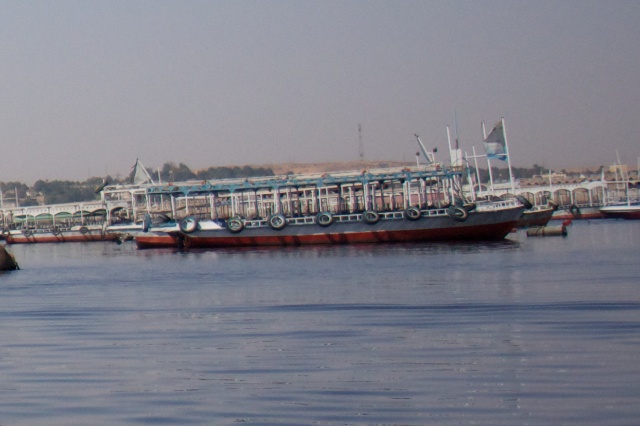 The temple is marvelous. Â There’s a colonnade leading to a large edifice carved with gods. Â Then comes an inner courtyard where worshippers could bring offerings, and finally an inner sanctum where only the priests would go. Â Everywhere you look there are carvings of the king making gifts to the gods, surrounded by hieroglyphs saying stuff that I would describe had I actually learned to read them this past year. 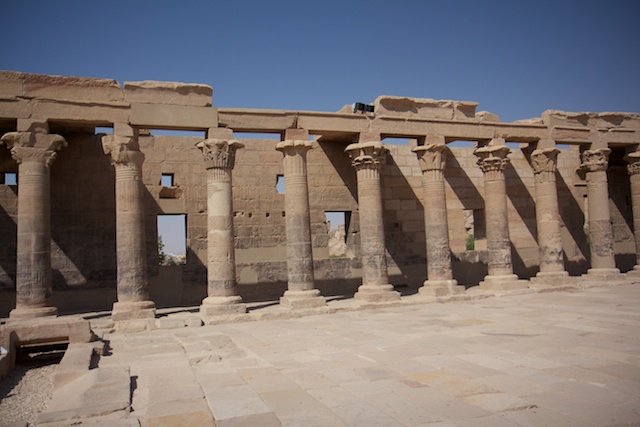 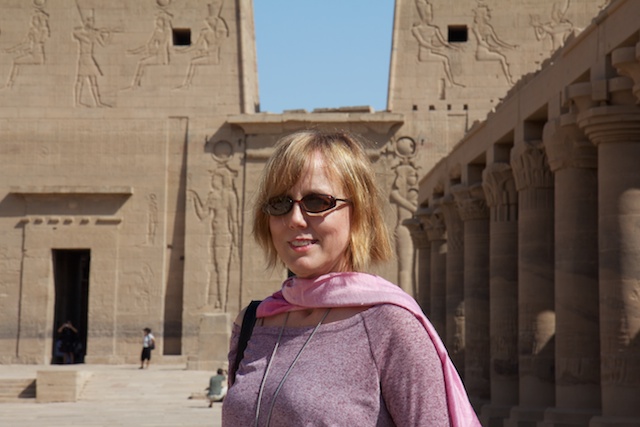 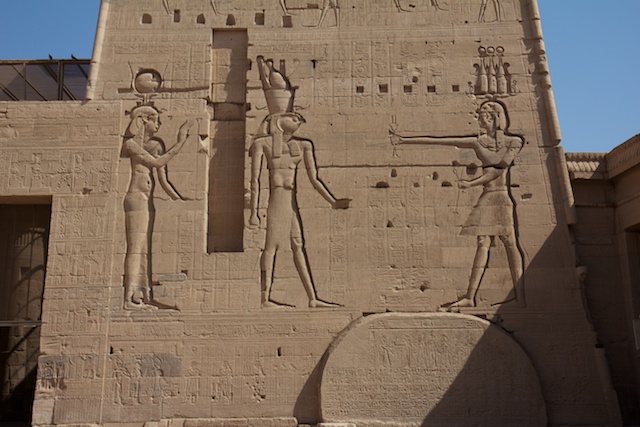 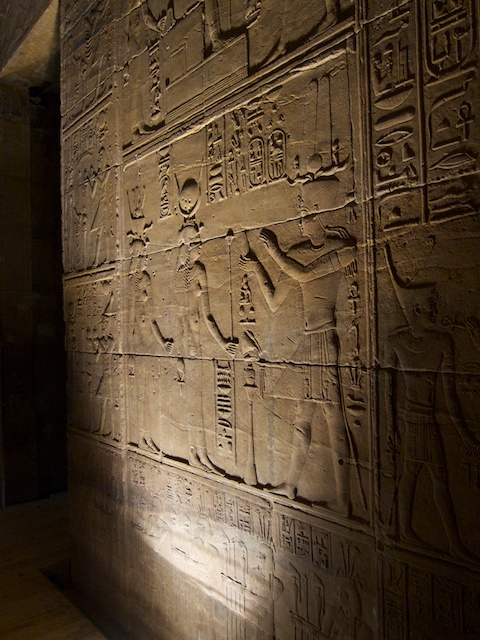 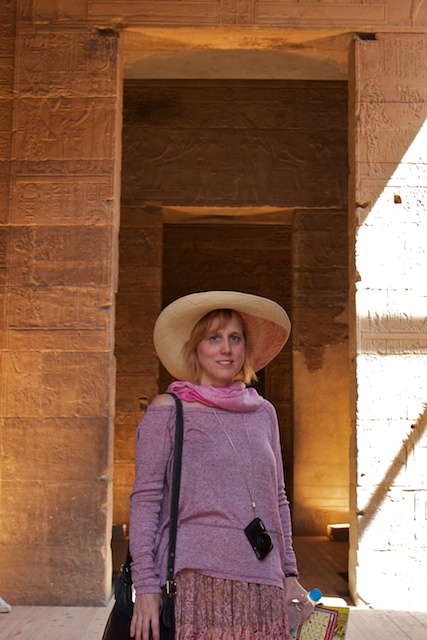 In the deepest sanctum, there was a relief of the baby god Horus standing next to Isis, his mother. Â Much of the iconography of these two are similar to later Christian art showing Mary and the baby Jesus. 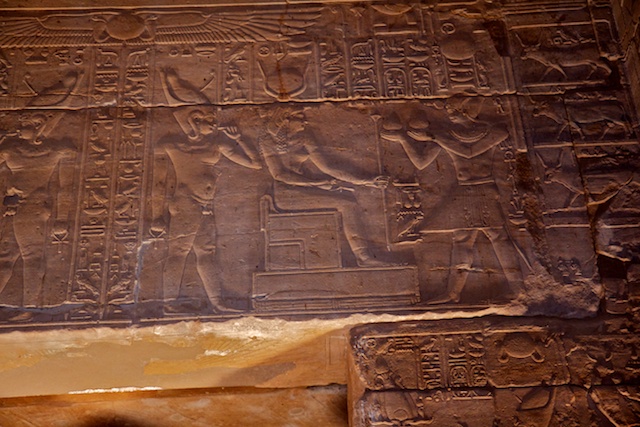 One of the interesting things about this temple is the way that later people marked it up. Â First, the Christians who lived in Egypt defaced a number of the pictures of gods. Â In several cases, the carved the Coptic Cross in critical areas. Â Here’s an example. 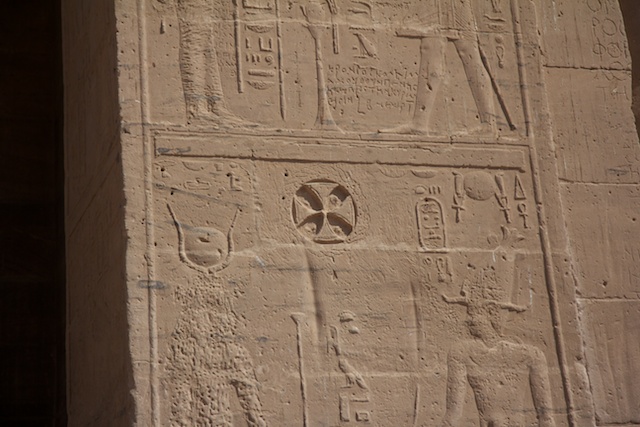 But there were many later examples as well. Â Here’s a piece of graffiti that got me excited. Â This was written by one of Napoleon’s soldiers who came to Egypt when the French invaded in 1796. Â At that time, France still used the calendar put in place during the Revolution. Â Which is why the text reads that it is 13 Messidor on the sixth year of the Republic. 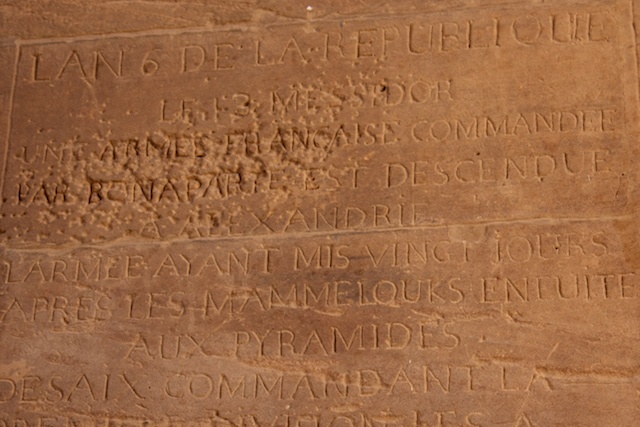 We also managed two entertaining interactions with Egyptians. Â First, a rather grizzled fellow insisted on having his picture taken with us (for baksheesh, of course). Â As he stood close to us, he leered and said, “Two husbands, one wife.” Â Julie did not seem amused. 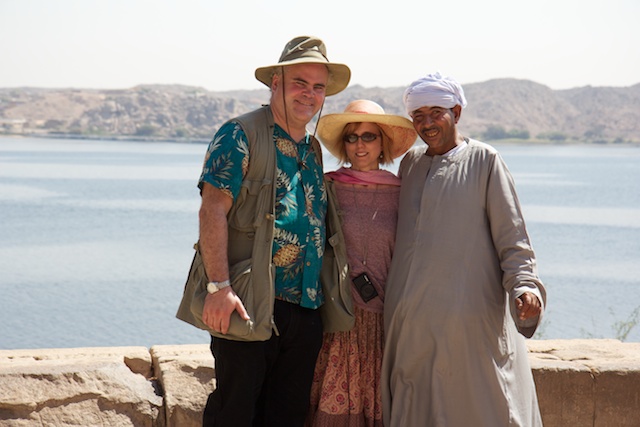 Second, as we were leaving, I was thirsty. Â So when I heard one of the local shopkeepers shouting “Water! Â Water!”, I shouted right back. Â I bought a bottle of water, we had a laugh together, and he gave me a free pack of gum and a picture. 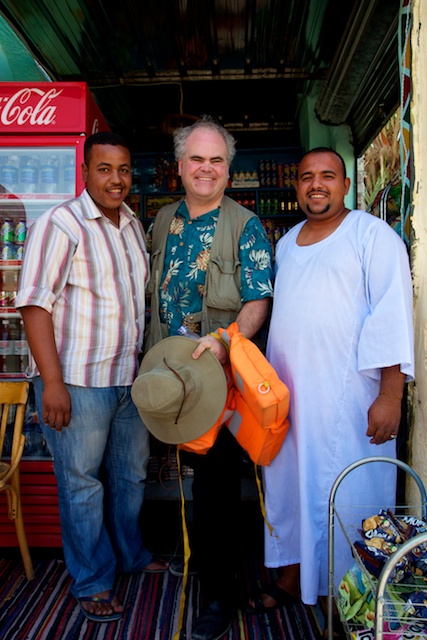 After that, we went to the Nubian museum, a lovely museum that includes artifacts from Nubia, many of which were found in the mad rush of archaeology that preceded the flooding by Aswan Dam. Â We saw several lovely pieces. Â And who knew that Nubians were so handsome? 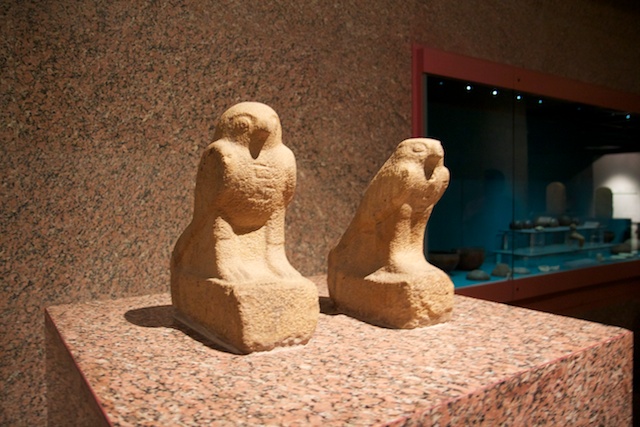 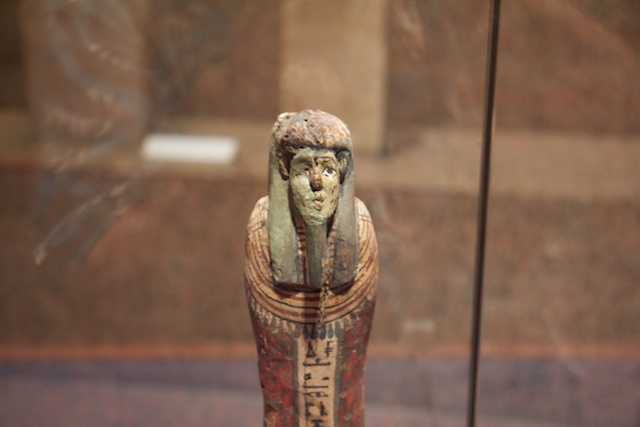 We then got back to the boat where we discovered that they like making towel animals. Â I’m a big fan of that particular artistic medium. 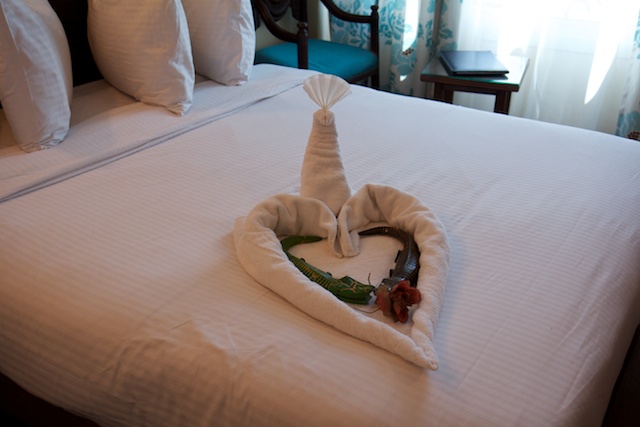 Then we were off, floating down the river to reach the temple of Kom Ombo near evening. Â This was another temple from the Greek period. Â In this case, it was to Hathor and to Sobek. Â Sobek is a crocodile-headed god: as our guide, the superb Karima told us, the Egyptians had gods that represented their greatest wishes and their greatest fears. Â One of their fears is crocodiles. Â Thus, a crocodile-headed god who specializes in keeping away the crocs. Â Apparently it worked, though it took a while: ever since the building of the Aswan Dam, there are no more crocodiles in the lower Nile.

One thing that I enjoyed was the cartouches. Â These are oval-shaped badges in which the names of the king were written. Â There were marvelous examples at Kom Ombo that still held much of the original pigment. Â (The Egyptians originally painted their temples. Â Whenever you see a picture of an Egyptian temple, imagine it not of bare stone, but painted in garish colors as they originally were.) 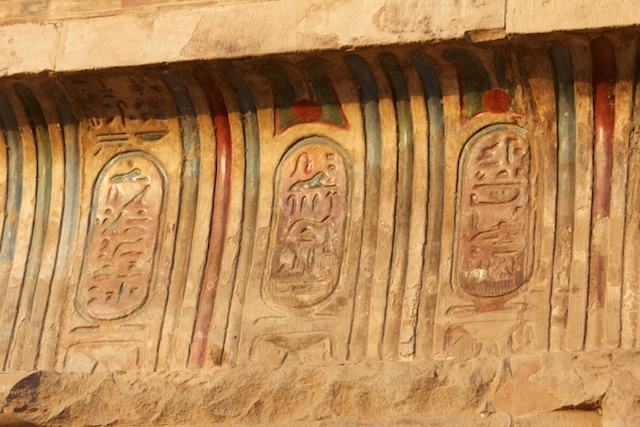 I learned enough hieroglyphs that I’m able to recognize a few cartouches. Â Ptolemy is one of the, which is good because there were about 20 Ptolemies and they all use the same basic cartouche. Â But this set seemed strange to me – there were three different cartouches, which is strange as any king typically used only two different ones. Â (The Egyptian kings had as many as five names, but only two that they put in cartouches.) Â I pointed this out to Heba and Karima, and they cleared up the mystery: two of the cartouches belonged to Ptolemy, the third to his wife, Cleopatra. Â (Not necessarily the Cleopatra: they had seven different ones.) 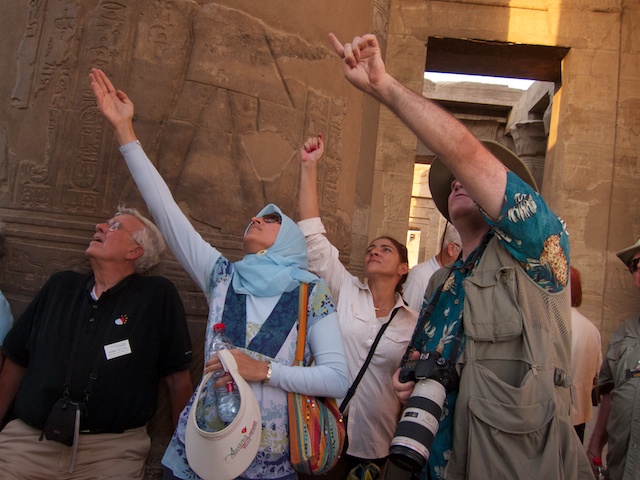 Here’s a few more pictures from Kom Ombo. Â Note that the sun set while we were there, thus the lovely light. 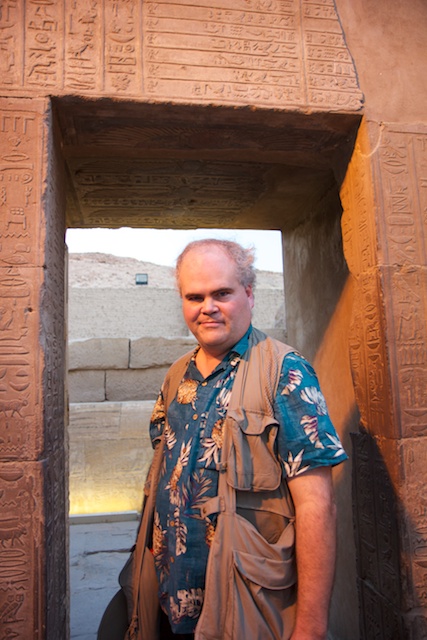 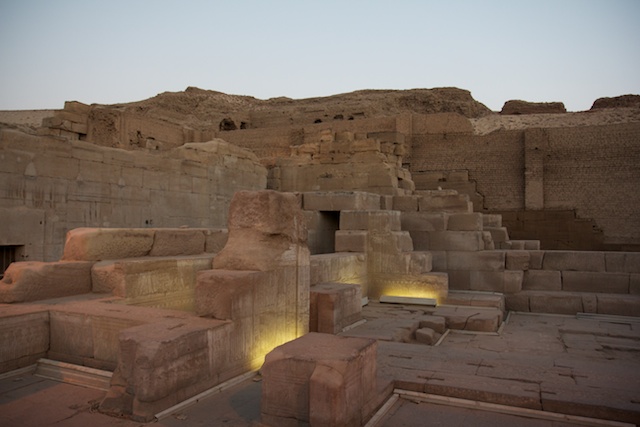 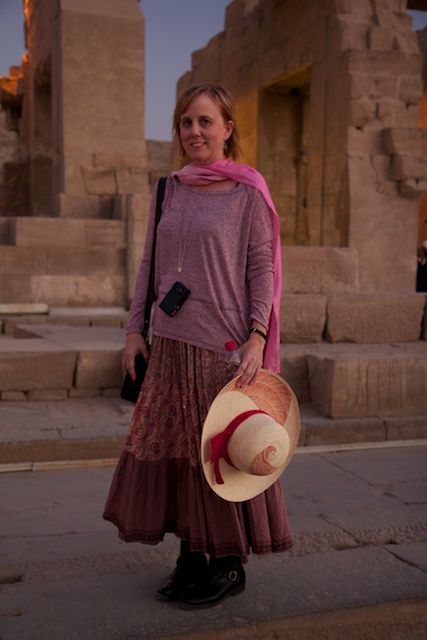 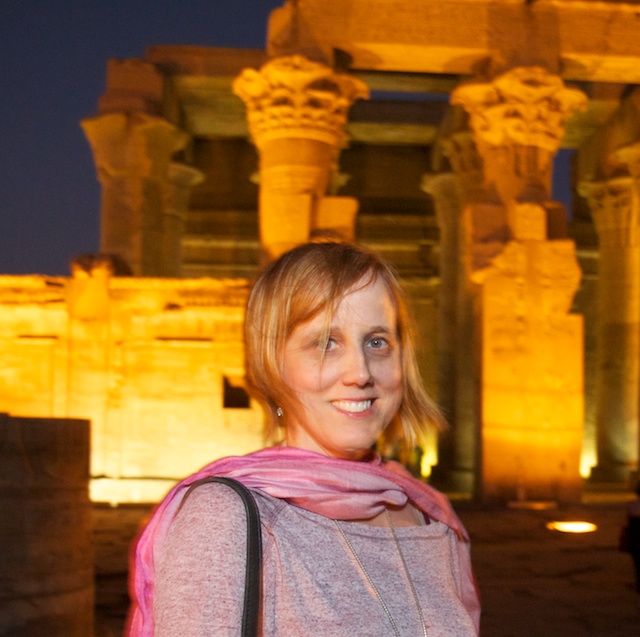