One of the results of the shift in our schedule is that our tour itinerary is way out of whack. Â The original itinerary started us at the Egyptian Museum in Cairo, the greatest museum of Egyptian antiquities in the world. Â A strong start, followed by a few more days in Cairo. Â Then we would fly to Luxor, see some more spectacular sites. Â Then, when we had been going strong for several days, it would be the Nile cruise, a chance to relax in the middle of the vacation. Â Finally, we fly back to Cairo and see the Pyramids, a grand finale for our trip.

But with our new itinerary, here it is just the third day of the trip and we’re already in the slow day. Â We had a grand total of one planned site seeing trip today, and that was first thing in the morning. Â After that, the day is all about relaxing. Â Which is nice, but I’m sure would have been much more welcome after six days of touring instead of after two.

Our first stop was the Edfu Temple. Â This is another temple built during the era when the Greeks ruled Egypt. Â It’s also the best preserved temple in Egypt.

We took horse buggies to the temple. Â They looked like this: 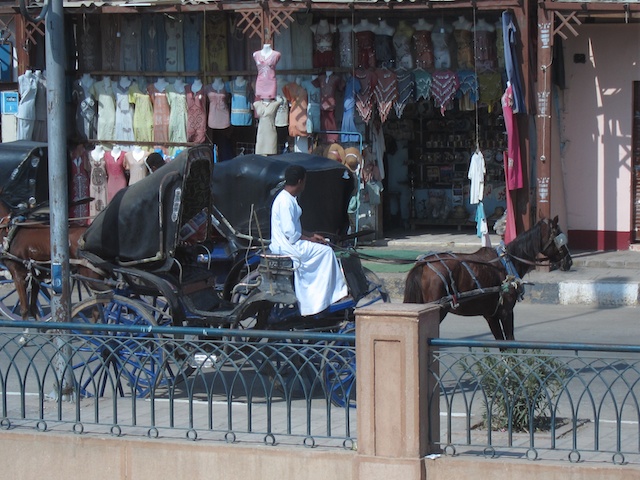 The drivers all call them “Feraris.” Â “Would you like a ride in my Ferari?” they shout, causing me some confusion at first.

Before leaving, one of the local shopkeepers came up to me and wrote “Joe” in Arabic on my hand. Â At least, my tour guides said it says “Joe.” Â So as long as they are not in on the joke, he didn’t write “Idiot.” Â (And if you happen to read Arabic and know otherwise, please don’t disillusion me.) 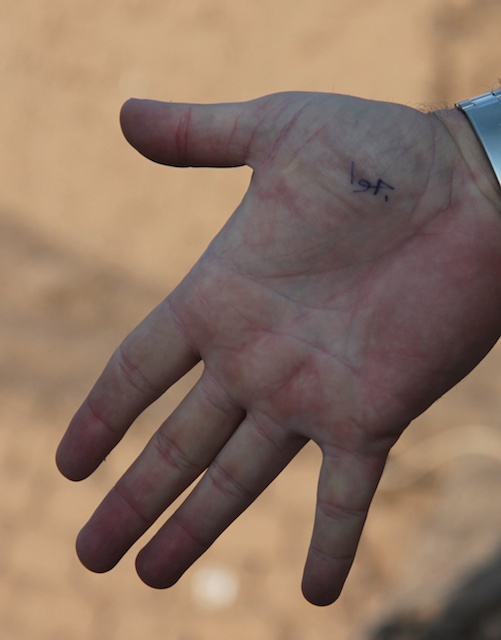 Then it was the temple. Â A marvelous design. Â Two things stood out for me at this temple.

First, there was the mix of Greek and Egyptian styles. Â The figures are still in Egyptian stances, but the bodies are bit more anatomically correct, reflecting the Greek interest in the beauty of the human figure. 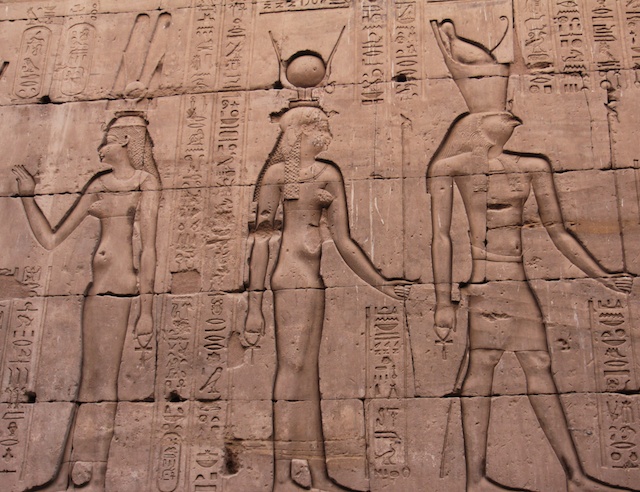 Another more amusing example: the Greeks insisted on adding these rain spouts to the temple, because that’s what they do back in Greece. Â In spite of the fact that if there’s one thing you don’t need in Egypt, it’s a rain spout. 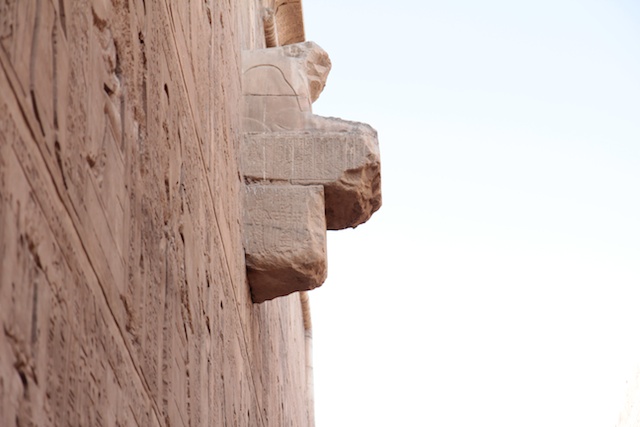 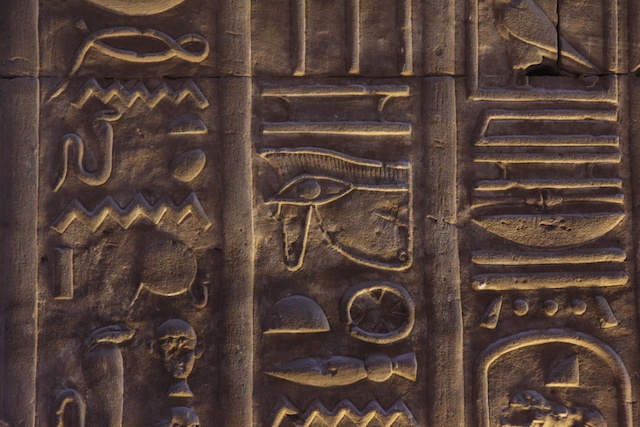 Note in the above example the beauty of the letters. Â Note also that the letters stand out of the stone, which means that the carver had to carve away the stone to leave only the letters. Â This is clearly more difficult than carving the letters directly in the stone (which is done in many cases).

Here’s a couple of random pictures from Edfu. 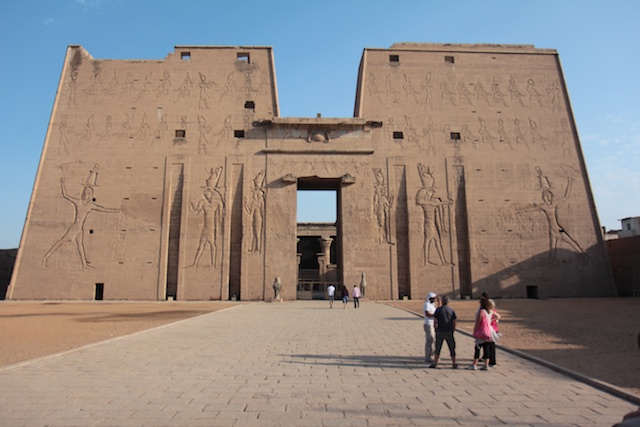 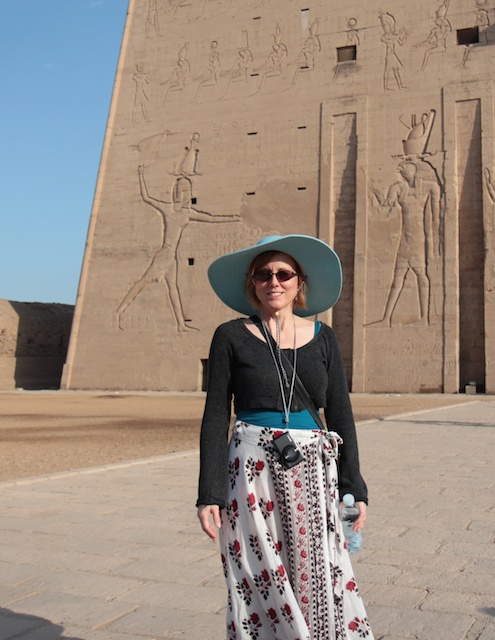 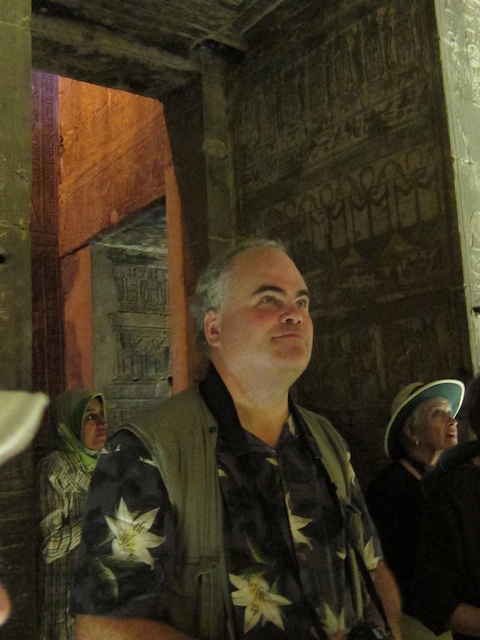 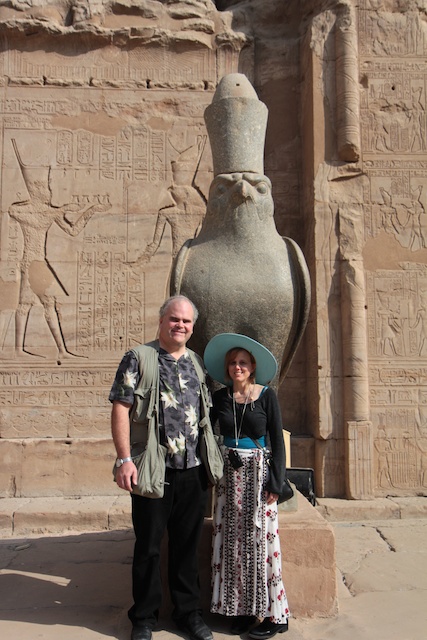 After that, it was back to the boat. Â We were back by 10, and, other than another lecture by Heba, we were pretty much done for the day.

But we did get to cruise the Nile. Â Which was marvelous, and which left me many opportunities to photograph scenes from the river. 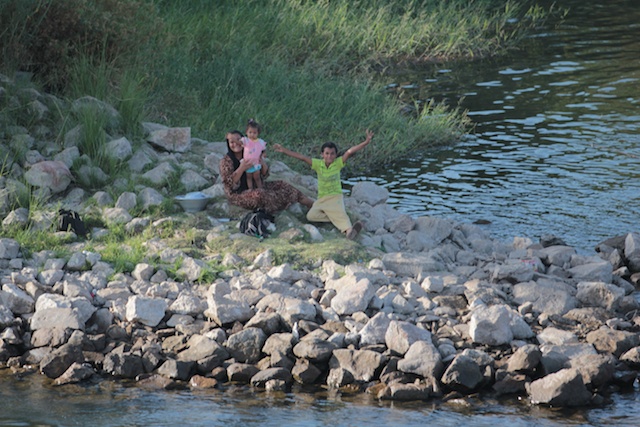 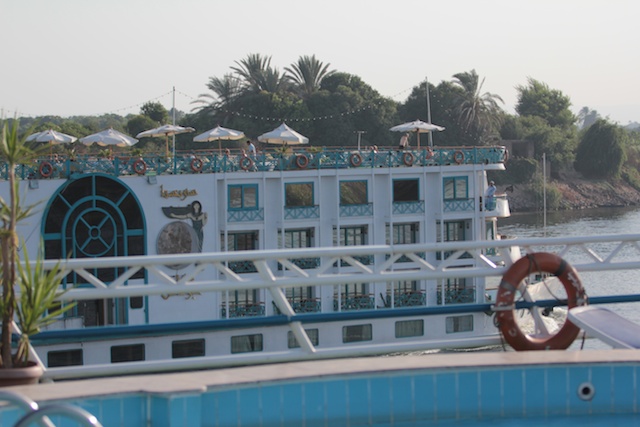 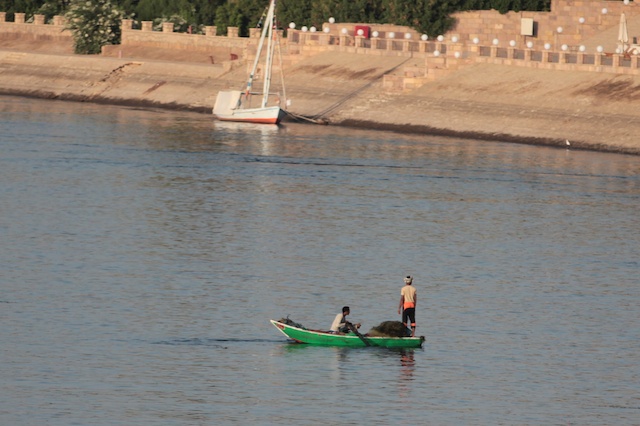 Remember that the Nile was historically the highway of Egypt. Â Boats of all sorts have traveled the river for over five thousand years. Â You still see a wide variety of boats engaged in various pursuits, cruising, fishing (which they do by spreading out a net, then repeatedly hitting the water with an oar, then pulling in the net), carrying cargo, or just ferrying people across the river.

One amusing stop was the locks at Esna. Â These are huge canal-style locks that we passed through. Â While we were delayed there, vendors in small boats came next to our vessel to sell various items to the tourists. Â They would throw the items in plastic bags up onto the boat three decks high and start negotiations. Â If a price was agreed to, the tourist would toss down the money in a bag. Â If not, you toss back down the item, and the boatman hopes that you have a good arm, or his wares are now floating in the river (which happened often). 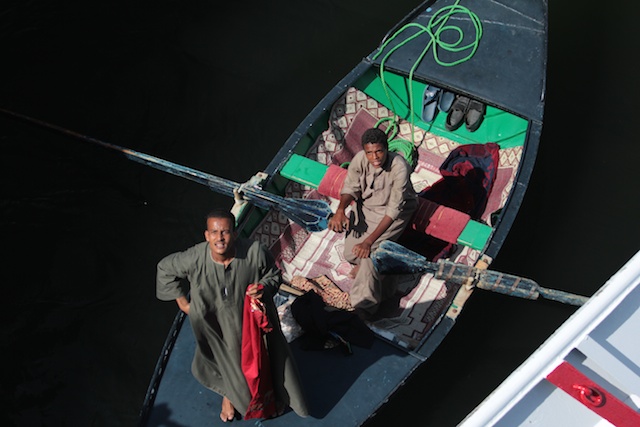 I proudly bought two woolen shawls for 120 Egyptian pounds (roughly $24), only to be chagrinned when, near the end of our time, the vendors were desperately selling the same items for 40 pounds each. Â Oh well, that’s 80 pounds for the shawls, 40 for a unique commercial experience.

Here’s one of my favorite things that I saw on the river. Â A man was washing his goat in the Nile. Â After I got my shot, I noticed that he actually had a small herd of goats, and he was bringing them one by one to the river to wash them. 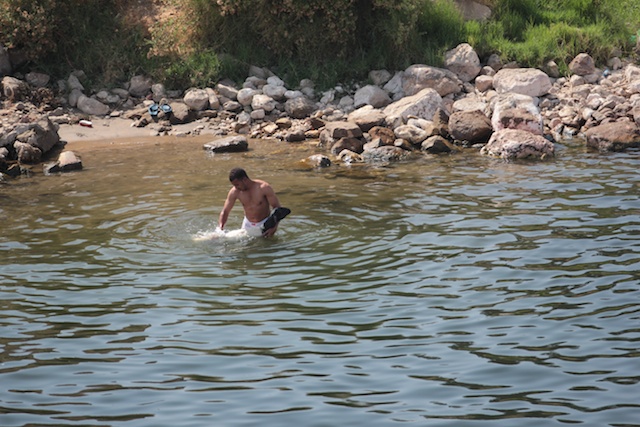 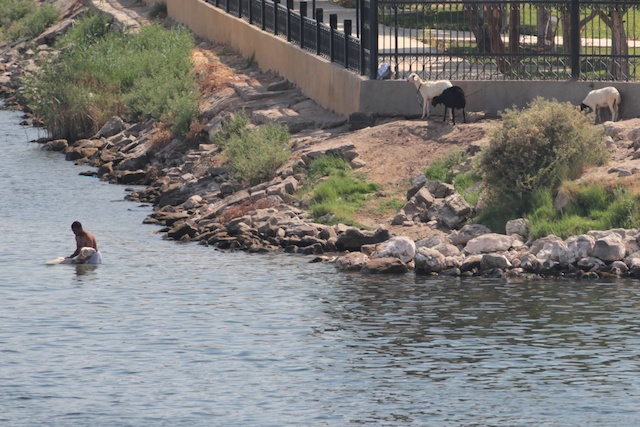 Our guide Karima told us later that there’s a Muslim tradition where the well-to-do will buy a goat to give to the poor during a certain religious festival, and that this is a good time for goat herders. Â My guess is that this man was cleaning his flock in preparation for market.

Here’s another picture that captures an important aspect of Egypt: 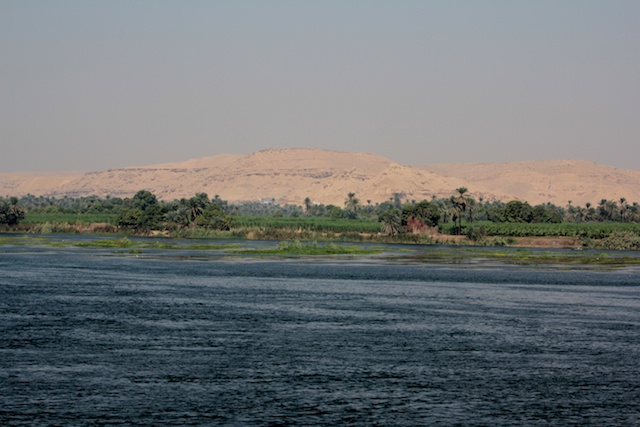 The ancients called Egypt the Red Land and the Black Land. Â The Red Land is the desert that is most of the country. Â The Black Land is the narrow strip of fertile land that surrounds the Nile. Â Watered by the Nile and, before the building of the Aswan Dam, fertilized by the river debris during the annual floods, the extreme fertility of this part of Egypt is why a great and wealthy civilization formed here. Â Where the red and the black lands meet there is a sharp divide: you can cross from farmland to desert in a step.

The boat docked at Luxor near the end of the day. Â I went for a small walk and found a village nearby. Â A man gave me a small tour, where I found myself and my camera the object of delight for a cute group of children. 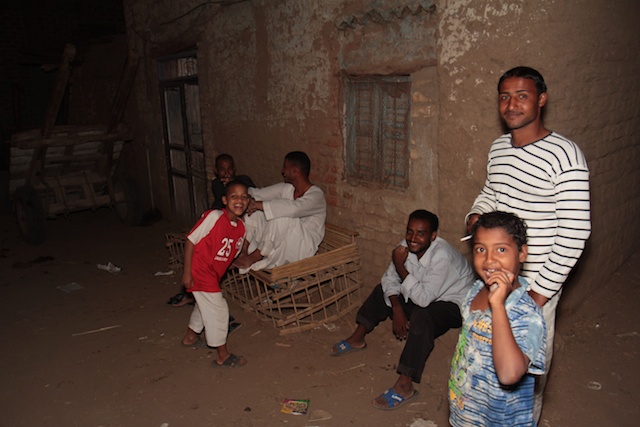 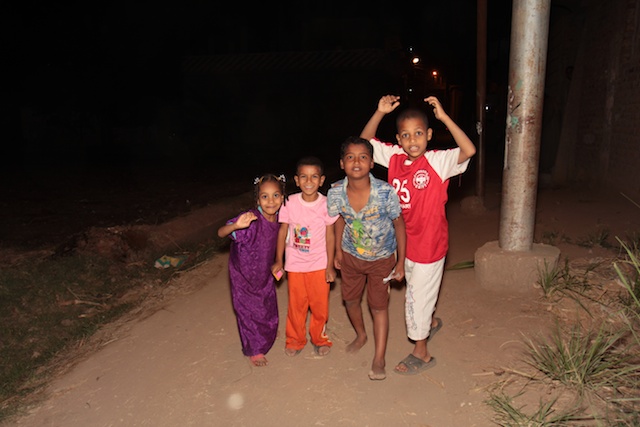 Then it was dinner and a costume party. 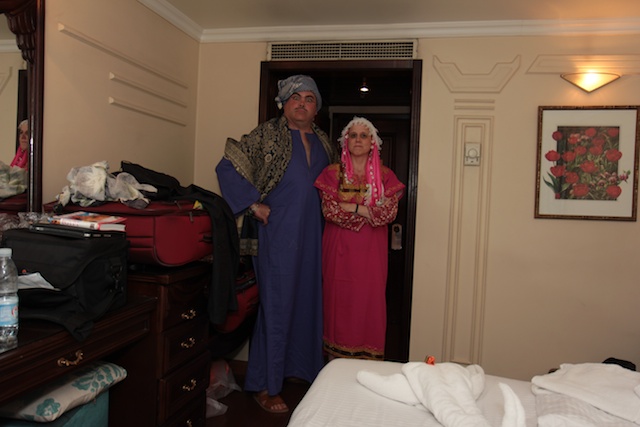 Then I wrote this entry (though I’m only posting it two days later), and to bed. Â Monday was going to be a big day, and it was only six hours away.