It’s been a few days since I updated, due to problems with network. Â That’s now corrected, so it’s time for an update.

After Dallas, Julie and I drove to San Antonio. Â San Antonio held the reason for the road trip – a convention of encaustic artists. Â That’s Julie’s medium of choice, so she wanted to go. Â They also had an art show related to the conference, and Julie got a painting in, so we had to attend the opening.

At San Antonio, we were joined by our next road trip special guest star. 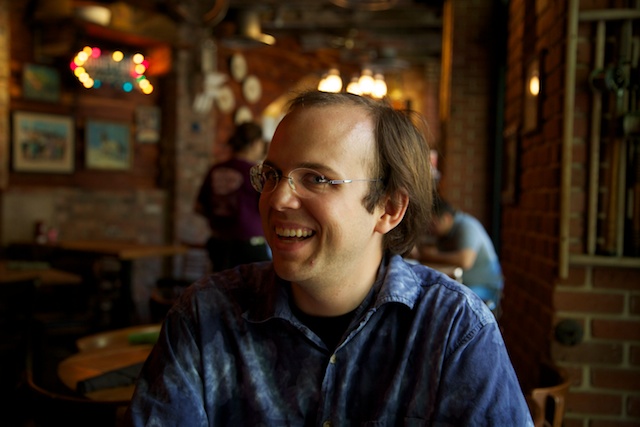 Andy decided to fly on down and join us to get a little flavor of Texas. Â So we picked him up at the San Antonio airport and then, while Julie went to her encaustic convention, Andy and I saw the city.

So what did we see?

Well, there’s this old mission in San Antonio. Â They had this big fight there, and a lot of people were killed. Â It played an important role in Texas history. Â But what was the name… hmmm… I can’t seem to… 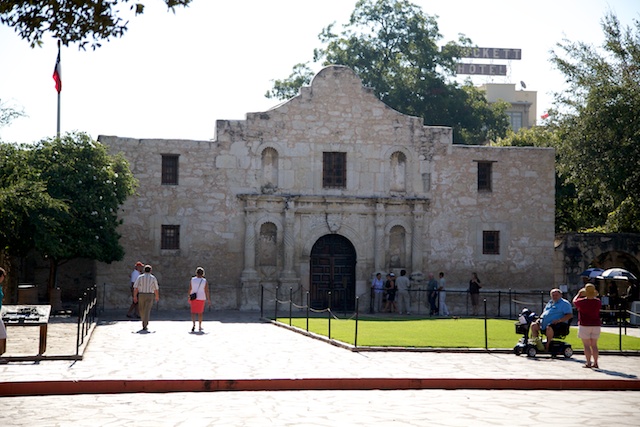 Naw, I guess I forgot.

We also spent a fair amount of time at the San Antonio Riverwalk. Â San Antonio has a small river that runs through it, and they have a set of sidewalks, about ten feet below street level, that run beside the river. Â At places there’s shops and restaurants, and it’s like a magic little water city that lives just below the streets above, streets that are far less magical than the river walk and, in some places, a bit rundown. Â It’s a marvelous place to wander and to have a drink or a meal.

We also visited a giant tower overlooking the city (only so-so – San Antonio doesn’t have much of a skyline to justify the scenic overlook). 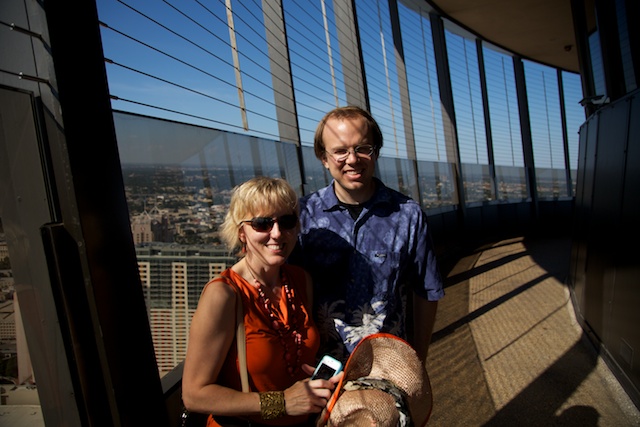 Then on Friday, Julie was in her conference and Andy and I drove out to the Natural Bridge caverns. Â Which turned out to be a rather excellent cave: 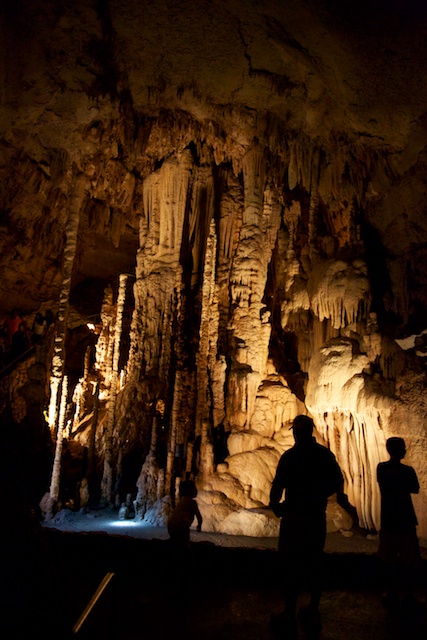 But there’s also a great ropes course and zipline that we did – that’s Andy getting ready to walk a tightrope about fifty feet off the ground: 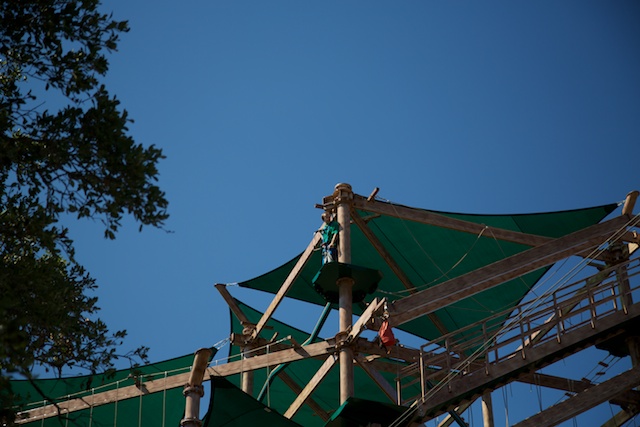 There was also a nearby jungle safari, where you drive through a large open area full of animals. Â Which, given that one of the major reasons for this roadtrip was the fact that I just bought myself a convertible, we did with the top down. 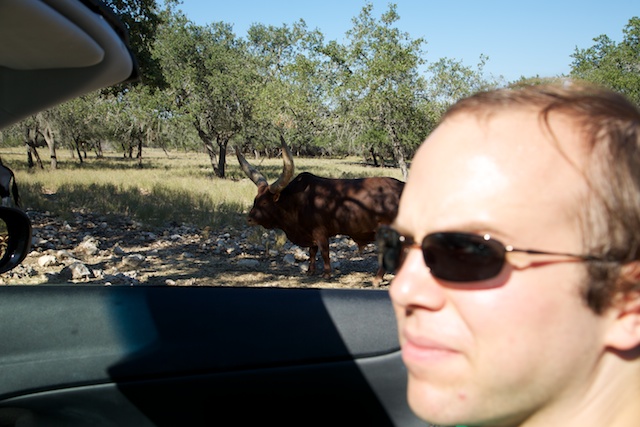 It was a truly Texas day, in a place where the buffalo roam, the deer and the antelope play, and the sky was not cloudy all day. Â Yes, I did sing to the animals – why do you ask?

I took lots of pictures, and often had the curious experience of looking through the camera snapping shots, then lowering the camera to find that the subject had gotten a whole lot closer than I realized. Â Like, a foot away. 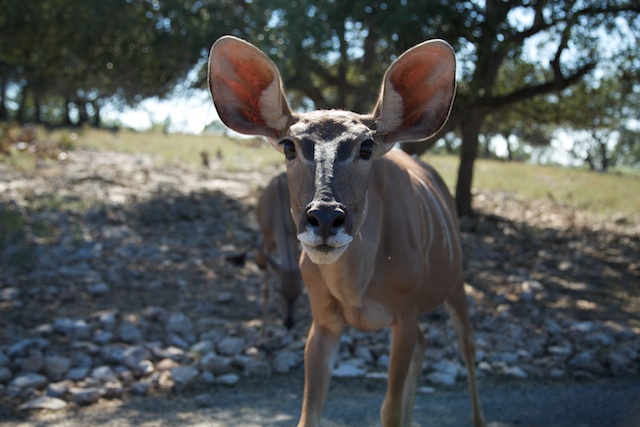 A bit disconcerting, that.

That evening, we joined Julie at the opening of her art show. Â Where we were once again joined by our niece Lucy, who drove down from Dallas to attend the opening, lend support, and join us for dinner by the Riverwalk where we were serenaded by wandering mariachi bands. Â Here’s a bunch of shots from that evening. 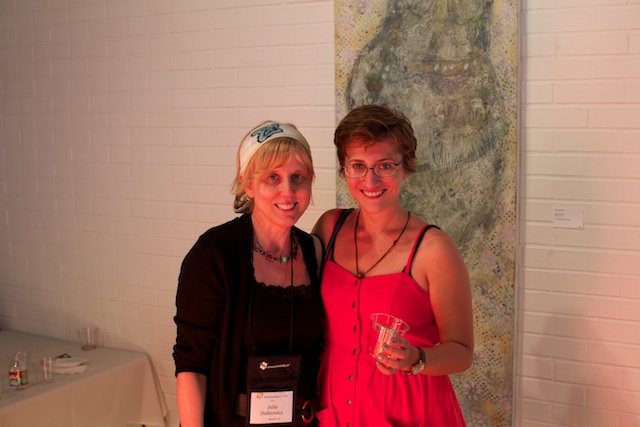 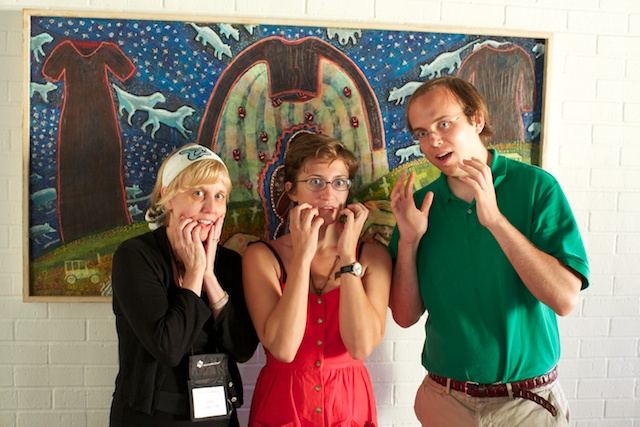 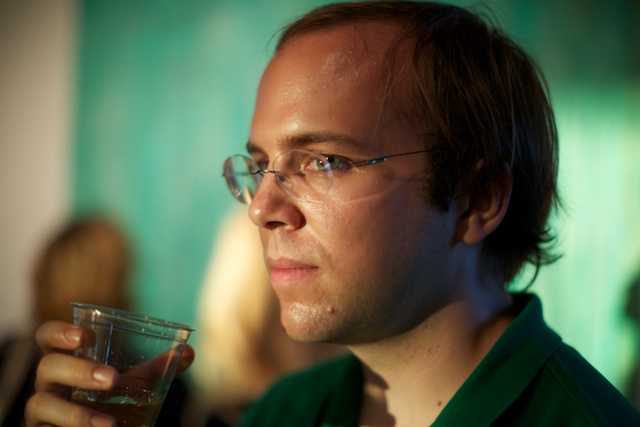 Is Andy contemplating the meaning of life, or just bored with all that art talk? 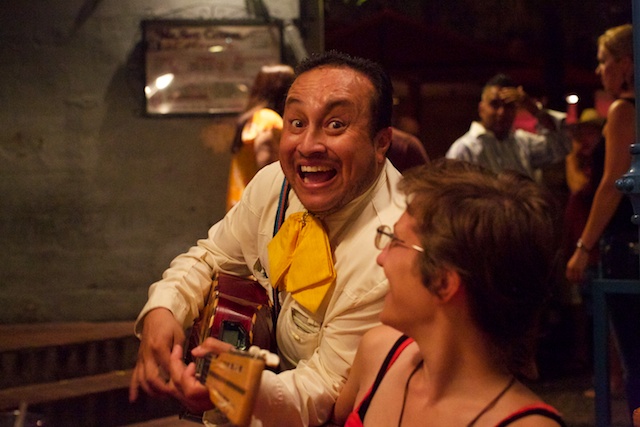 The next day, Julie was in her conference, and Andy was taking a day to wander San Antonio by himself. Â So I visited some of the missions that were built three centuries ago, missions that formed the heart of San Antonio. Â I found myself surprisingly moved. Â While I’m not religious, this was a place where simple men went to do their best to bring God and civilization to a strange people in a land far from their homes. Â I’m sure the men were not all perfect – the last few years have brought harsh evidence of just how bad a priest can be – but I believe that their efforts sanctified the places where they worked. 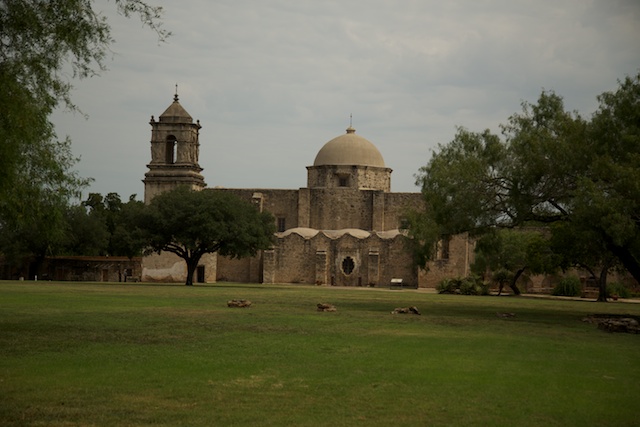 Here’s a modern day Franciscan monk: I bought Julie a necklace from him. 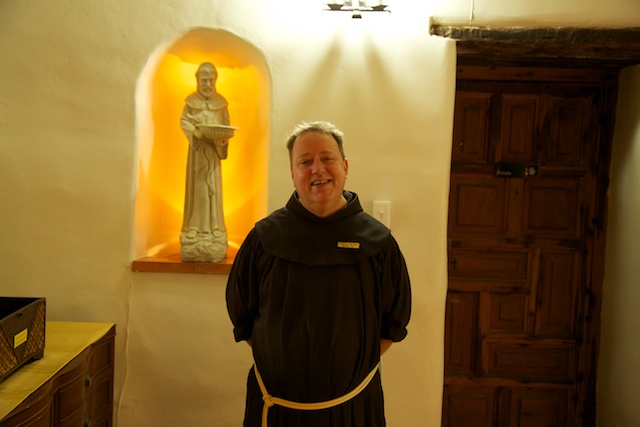 (I suspect that the placement of the light above his head is not accidental, and that he knows just where to stand when a tourist asks to take his picture.)

Then it was one last San Antonio dinner, and off to Austin and another blog post.

(And oh, if you ever find yourself in San Antonio, do yourself a favor and have dinner at Bohanan’s. Â A truly amazing steakhouse – Julie and Andy agreed that it was the best steak they ever tasted, and I’m not inclined to argue the point.)