Another day in Florence

And so ends another day in Florence. Â Nothing too spectacular today: we visited the Palazzo Vecchio, the palace of the Medicis when they first came to power. Â We visited a modern art exhibit. Â We visited several churches. Â We ate a great dinner and the best gelato I’ve found in Italy. Â All in all, we ended up at several of the second-string attractions in the city, but had fun doing so. Â And tomorrow we’ll be off to Venice.

But first, the pictures. Â For those of you back at home living through the ebola panic, rest assured that you are not alone. 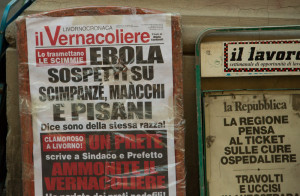 For those of you who have been seeing Julie’s pictures posted on Facebook, here’s an example of how she’s taking them. Â Her camera gear is much easier to carry than mine! 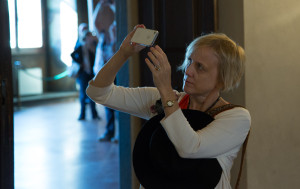 For those of you who like to collect artistic oddities, here’s a piece of art that made me ask, “Did I just see what I think I saw?” 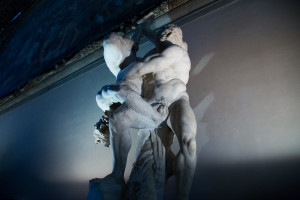 It’s not clear in that picture, butÂ Diomedes (or maybe it’s Antaeus – reports vary) is grabbing Hercules’s manly bits. Â Here’s a closeup of the deed being done: 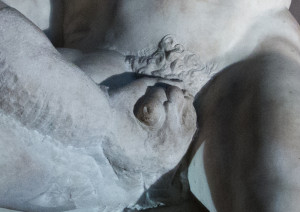 This is a statue in the great hall in the Palazzo Vecchio. Â The Medicis identified with Hercules. Â I’m not sure what it means that Hercules is getting grabbed like thatÂ in their great hall, but there it is. Â (It should be noted that Hercules went on to win this fight. Â A mighty man indeed! Â But I wonder if they had this scene in the recent Hercules movie.)

Here’s a picture of Julie wearing a new headband that she got at an exhibit we saw of Picasso and other Spanish modern art. 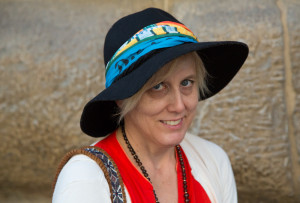 And here’s a picture of me next to the shop selling the best gelato we’ve had in Italy. Â (Gelato is kind of like ice cream, and frankly I don’t understand the difference. Â There’s lots of gelato all over Italy, and I’ve been eating an average of 1.5 cones a day. Â But this place, called Edoardo’s, next to the southeaster corner of the Duomo, has the best I’ve tasted. Â At some point I’ll share the terrific rules taught usÂ by a guide on how to find good gelato shops.) 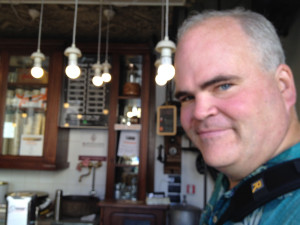 But let me make a brief digression on the strangeness of medieval/renaissance religion. Â Catholicism was awfully strange back then. Â In particular: 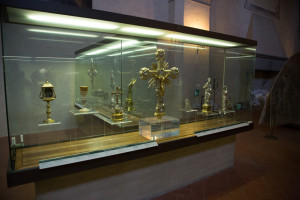 Every one of those golden objects in the display cases is a reliquary. Â A reliquary is a special case used for the display of a relic, which is usually the bone of a saint. Â For example, here’s a reliquary for Saint Sebastian, the saint who is usually depicted getting shot full of arrows. 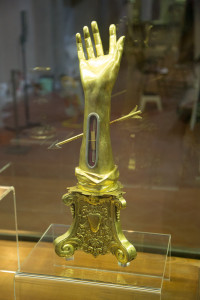 And here is a closeup in which you can see the displayed bone. 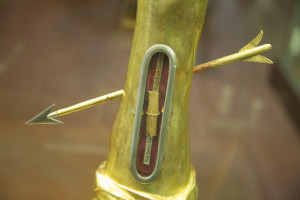 ThisÂ is supposedly one of Saint Sebastian’s bones. Â A great holy object. Â Worthy of veneration. Â And prayer. Â To a bone.

To which I can only say, Ewwwww!

Of course, one of my favorite museums in Washington is the Army Medical Museum, where you can see bone fragments from two murdered presidents and the leg bone of one Civil War general, not to mention the bones and organs of many other less distinguished dead people. Â So perhaps I’m not one to talk.